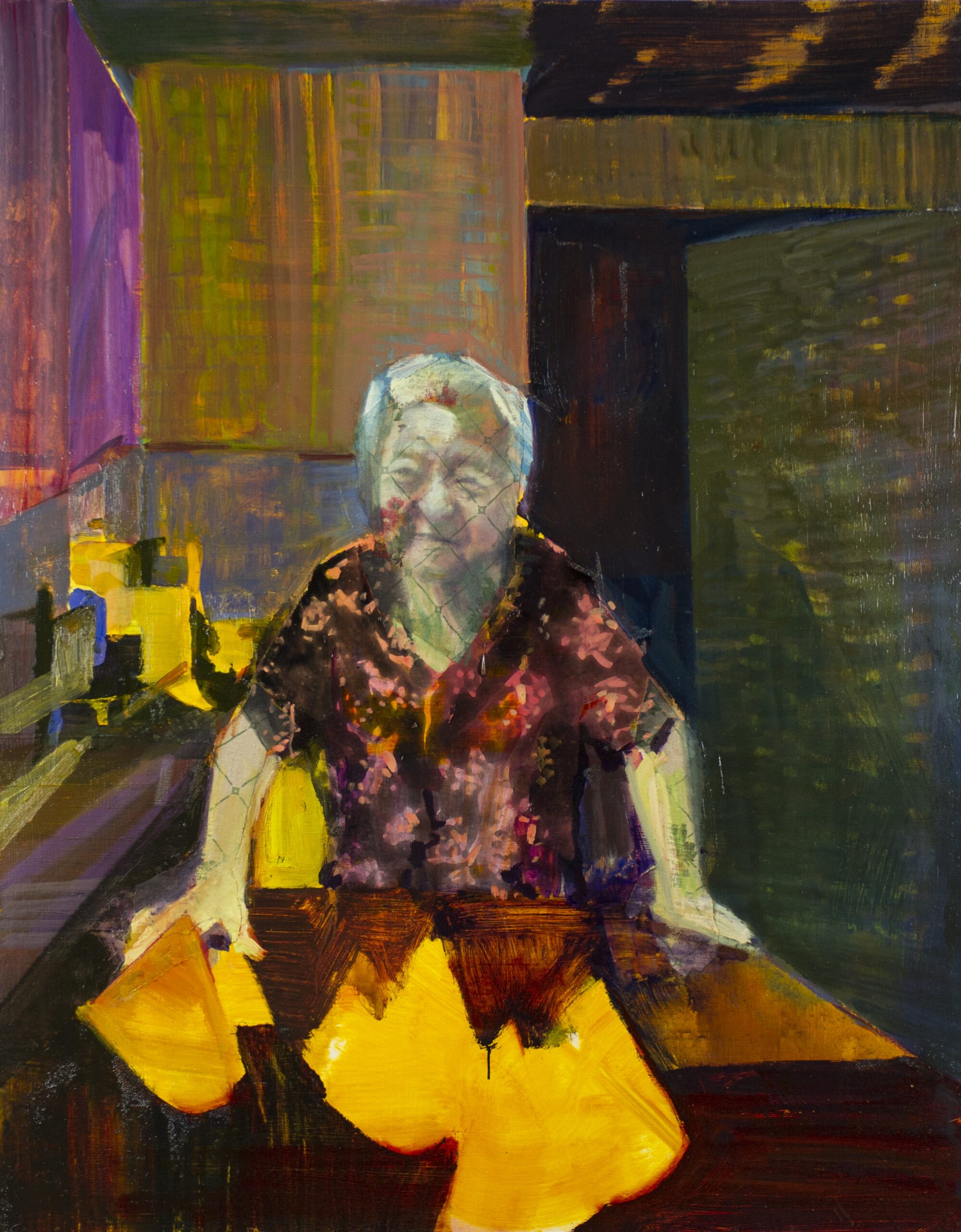 Having spent the last three years in Kansas City, Missouri, Kathy Liao’s exhibition in Seattle is a homecoming of sorts. The city has changed in the time that she has been away. Once familiar areas have been added onto, things have been taken away, and the remembered landscape has changed. The confluence of familiarity and dislocation, of memory and presence, and of construction and erasure is a fitting context for Liao’s, Lingering Presence, an exhibition showing at PROGRAPHICA / KDR through July 1.

Lingering Presence features twenty-two of Liao’s works and spans the three years since she relocated to Kansas City in 2014 to became an Assistant Professor of Art and the Director of Painting and Printmaking at Missouri Western State University. She describes these years as a settling in period, adjusting to Kansas and separation from family, and that “[w]ith each painting, I am constantly re-establishing my relationship with the subject matter, being especially conscious of my physical and emotional distance.”

This re-establishing forms the narrative core of the exhibition as Liao explores memory and connection through a range of works – large format self-portraits in oil, intimate remembrances in washi tape and gouache collage, moments of being in transit, of being together, and of being alone – the voices of individual works gaining even more complexity as juxtapositions between works emerge. The sense of connectedness between the pair of reclined figures in Proximity #3 (2016, aluminum plate lithograph, 8”x10”), accentuates and is accentuated by its contrast with the lone reclined figure in All Day Nap (2016, gouache and collage on paper, 9”x12”). The acknowledgement of the viewer’s presence by the seated figure in Polka Dot Couch (2016, mixed media, 10”x7.5”) contrasts with the implied connections in Metro Connection Blue (2016, oil on canvas, 32” x 24”) as commuters gaze into portable devices.

Shifts in the meaning of remembered moments is perhaps most evident in the contrast between two of Liao’s works based on a single memory of her late father.  In Sunbathing (Yellow) (2016, 18”x18”),  a collage of cut washi tape and gouache pigment build layers of geometric form and reflected sunlight to reconstruct a warm remembered moment of Liao’s father sitting on a bench by a pool. She describes the piece as an attempt at “holding on and trying to get back to that moment.” This memory is revisited in the oil on linen work, Absent Presence (2017, 24”x24”), but here Sunbathing’s bright palette of yellows and blues has yielded to umber tones, previously distinct structural elements blending together, her father’s physical absence rendered as luminescent form against the now dark courtyard.

Liao notes that her shift from building layers of reflected light to incorporating subtractive translucent light corresponds to changes in how she relates to memory. “In the last few years, my grandmother’s memories have been slipping away from her. I hold her close to my heart, but I can feel the distance between us widening. I am at the periphery of her foggy world.” Her grandmother, now ninety years old, is a reoccurring figure in her works and is prominently featured in one of the show’s most powerful pieces.

In Memory of Watermelons, (2017, oil and fabric on canvas, 54”x42.5″) Liao’s grandmother is exquisitely present, her face expressive and engaged, her flower-patterned blouse evoking so many other memories of grandmothers within the community. The precision with which she cuts and serves melon slices, the clarity of the moment itself, stands in contrast to the ethereal triangles of melon, rendered in yellow translucence. Liao states that “What’s not there intrigues me rather than forcing things to be there,” realizing that despite it being an essential memory for Liao, her grandmother no longer remembers the serving of watermelon. This once lived, inhabited and grounded moment is no longer tangible in the spaces of her grandmother’s memories.

Liao’s shifts in perspective as she explores memory have had direct impacts on her making of art as well. “My work has slowed down,” she says as she now paints less from life and more from memory. Her grandmother’s loss of memory has inspired her to visit her own memories, changing them, focusing on some aspects while ignoring others.

Liao’s distance from home has been an equally important influence on her exploration of self, connections, and memory. She describes her move to Kansas City as being “torn from one place and far as ever from family.” Her sense of disconnection and the technologies through which we are able to connect despite distance are central themes in So Close and So Far, (2016, mixed media, 8.5”x12”) and Scrolling Up and Down, (2016, mixed media, 11”x7.25”), the scale of the works helping to evoke the fleeting sense of intimacy made possible through a Skype call or reading a new Facebook post.

Lingering Presence includes three self-portraits – one created each year she has been in Kansas City. The earliest one is tightly framed, her face filling the canvas from edge to edge, with thick layers of paint building up her features. In the 2015 piece Self-portrait in Studio, Liao has widened the view to a waist-up perspective and includes elements of her surroundings in the frame. In 2016’s Self Portrait KCMO the view has widened even more to almost full body perspective, the scale of the work has increased, and the studio space reinforces the presence of Liao’s figure in the frame. In the process of turning inwards, it seems that Liao has achieved a greater sense of relation to her own physical space as well as to her relationship with memory