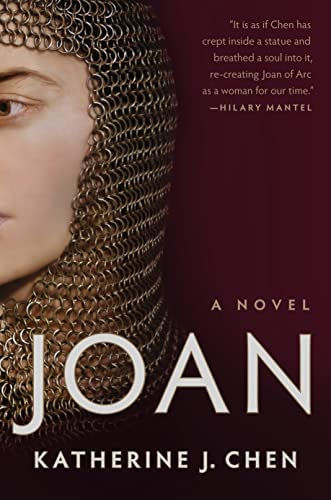 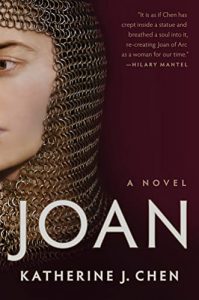 What makes a saint? Globalization yields answers as vibrant and diverse as the people who give them. But what if you asked a French Catholic? Better yet, what if you asked a French Catholic from the late Middle Ages? They might describe a martyr, some sinless holy woman thrown to the lions as punishment for her faith. Or maybe a hallowed hermit who received messages from God all thirty years of his seclusion. “Look,” your new friend might say as you enter a cathedral. They’re pointing to a row of marble statues with eyes and hands raised to heaven. “These are our saints. They bring us healing, protection, and peace.” You can’t help thinking the statues look anemic and ineffective. Joan d’Arc, patron saint of France, thought so too.

In her debut, Joan: A Novel, Katherine J. Chen resurrects a daring French teenager who fights her way from the dregs of society to military glory –  and even sainthood. All this plays out against the Hundred Year’s War between France and England in the late Middle Ages which, if you’re born on this side of the pond, is a perplexing era unto itself.

Chen does a wonderful job managing her plot’s potential bagginess. At the beginning of the novel, she provides charts showing blood relationships and – more important in this case – political alliances. This prepares us for the forthcoming characters as we interact with them. Can’t remember who’s who? Flip to the front of the book and voila! Chen also divides the book into four parts that correspond with Joan’s rise to power and unexpected downfall; she begins each section with a short historical summary so we’re up to date before we return to the story. This may be plenty of proof for the average reader, but Chen also includes an “Afterword” with her research methods for would-be scholars still inclined to raise an eyebrow.

So who is this Joan, and how did she create such a controversy almost six centuries ago? When we pick up the novel, we should remember Joan and most of her village were illiterate, so the small record we have of her begins with her arrival at the French court during the Hundred Years’ War. This means that Joan the child and young teenager are Chen’s creations, even if she designed them to produce the figure she sees as “Historical Joan.”

Young Joan is fearless and incorrigible, fighting “battles” with the village boys and surviving her father’s brutal beatings – even when that means sleeping under the stars. Unlike the other women in her village, she doesn’t pray to saints because she sees that as a sign of weakness. If the saints couldn’t deliver themselves from their own travails, how can they deliver her?

Everything changes one day when the English raid Joan’s village. Her family loses almost everything, so Joan decides it’s finally time to pray. Except she doesn’t ask God to do anything. She tells Him the men she will kill for France:

She repeats the names, as if God were a slow pupil in need of reminding and the angels scrambling for styluses and wax tablets to jot them down. She tastes the names in her mouth, each one a bitter seed: John, Duke of Bedford, Regent of England, Henry, sixth of his name, future king of England. Philip, Duke of Burgundy. (119)

The story picks up pace after Joan’s declaration. Her father (unsurprisingly) throws her out of his house and she makes her living various ways, until she is discovered to be a prodigy with the sword and bow and arrow. This part of the novel feels somewhat contrived, except that Joan’s military gifts are the first historical record we have of her. Chen is just retelling what happened.

Shortly after she’s discovered her new gifts, Joan is summoned to help the French lift a siege at Orleans. The siege has dragged on for ages even though the French Dauphin (future king) and his crones have sent various “holy people” to help the military. Joan is their next pick. Her gifts must come directly from God, courtiers claim – why else would a woman excel champion soldiers? But Joan isn’t interested in being a saint: she wants to do great deeds to help real people. Saints just stare down helplessly from their marble shrines.

Chen sticks to the actual events of Joan’s brief military career, but uses her imagination to color what must have made for vivid court gossip – possibly even scandal. Why did Joan cut her hair and dress in men’s clothes? Why didn’t her Dauphin object? How did she feel commanding an entire army –  in an era when women belonged  “in the kitchen”? What did she make of a nation’s adoration when she didn’t pray to saints herself?

The way Chen secularizes Joan by portraying her as a dynamic child and self-made warrior makes her relatable to readers today. Joan doesn’t toss out lofty promises based on her concocted sacred reputation. She wallows in the mud with her soldiers in the heat of battle. She returns to the field to bury a dying Englishman who begged for mercy. On rest days, she visits the poor and sick of Orleans. No, Joan doesn’t listen to prayers because she’s too busy answering them.

But neither does Chen leave us with a photoshopped picture of this prodigious young warrior. Joan’s career is only good when she doesn’t believe her own press. But what seventeen-year-old can resist that indefinitely? As Joan insists throughout the novel, she’s not perfect. Those of us who paid attention in history class have probably guessed how Joan’s story ends. I have the satisfaction of announcing that Chen concludes her narrative with an unexpected twist. Her ending forces us to answer the question I asked at the beginning: What makes a saint? Or as Joan might put it, What makes a savior?