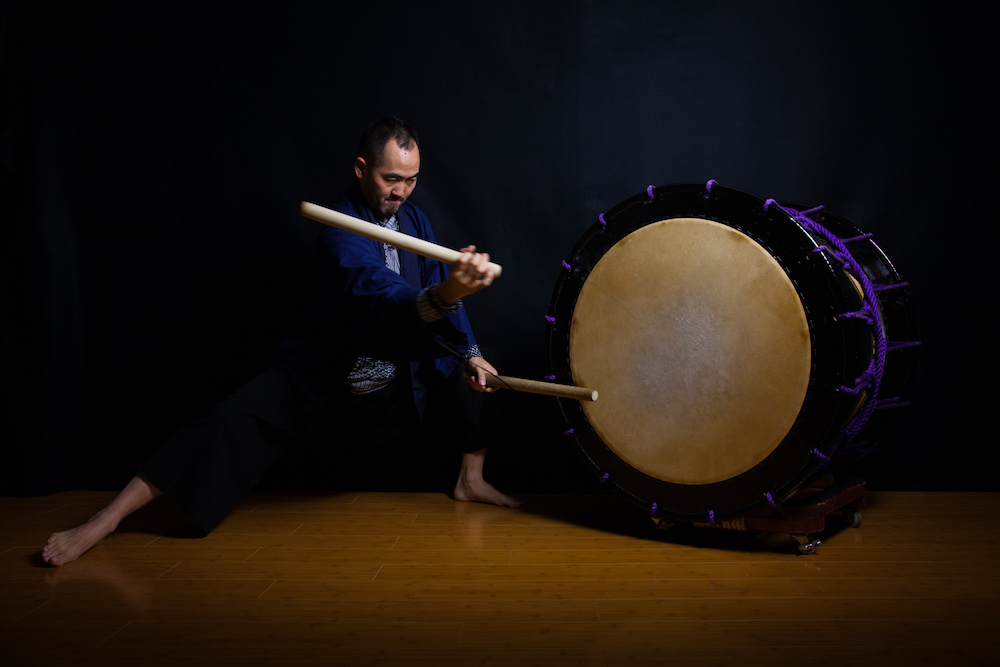 Kaoru Watanabe is a Brooklyn-based composer and musician, specializing in the Japanese taiko drum and shinobue flutes. He has spent decades artfully blending the sounds of Japanese instruments with those from around the world, starting from his days at Manhattan School of Music studying jazz flute and saxophone, to Japan, where he joined the world-renowned taiko performing arts ensemble Kodo.

Two years ago, director/producer Wes Anderson asked Kaoru to play taiko for the soundtrack of his new film, Isle of Dogs. The world premiere came at the opening of the Berlin Film Festival (Berlinale) on February 15, 2018, and Kaoru was invited to play on the Red Carpet for the film’s showing. Film critic Misa Shikuma was there to review the film for the IE. The film is set for general release in the U.S. on March 23. We recently caught up with Kaoru to find out how he got involved in the film and what it was like.

From the Isle of Dogs website page:
Isle of Dogs tells the story of Atari Kobayashi, 12-year-old ward to corrupt Mayor Kobayashi. When, by Executive Decree, all the canine pets of Megasaki City are exiled to a vast garbage-dump called Trash Island, Atari sets off alone in a miniature Junior Turbo Prop and flies across the river in search of his bodyguard-dog, Spots. There, with the assistance of a pack of newly-found mongrel friends, he begins an epic journey that will decide the fate and future of the entire prefecture.

Stan Shikuma: How did you first get involved with doing music for Wes Anderson’s new film, Isle of Dogs?

Kaoru Watanabe: Wes’ long-time music supervisor, Randall Poster got in touch with me about two years ago about this and some other films. (But) this all started when Wes came to my studio in February of 2016 to meet with me. Soon after, we spent a whole day in Electric Lady creating tracks. It was a super creative, fast, fun process where I would play something, and he would suggest changes and different colors and grooves. He’s not a musician per se but definitely knows how to craft and shape something according to his own aesthetic.

For the Berlin Film Festival premiere, he asked me to perform so I reached out to my fellow ex-Kodo bandmate Tsubasa Hori and London-based Jyoji Hirota to jam.

SS: Describe your process for creating the music for the soundtrack. Did you find it easy or difficult? why/how?

KW: The first step was just Wes, the recording engineer, and me spending about seven hours in a recording studio. It was very fun and easy. Wes would describe a scene or a feeling, and I would improvise something. He would then ask me to alter it or add layers to it. We would experiment with different approaches and quickly went through many ideas. At one point, Edward Norton came in to watch and hang out. We had lunch together.

SS: How did/does your background (in taiko, fue, jazz as well as Japanese and American culture) influence or guide the music you create?

KW: My background in classical music, jazz and Japanese music always come out in my playing and composing. For example, I’m very comfortable improvising because of my jazz background, but it’s through working with dancers and Kabuki actors that I have experience capturing different moods and feelings with music. I am very comfortable playing in a wide variety of rhythms, pulling from two decades of collaborations with musicians from across the globe, but also love being very free and abstract, very “downtown” New York.

SS: Have you worked on scores or soundtracks for other films? Which ones? If so, how was work on Isle of Dogs different? or the same?

KW: As a member of Kodo we worked on a few movies (The Hulk, Hero). Since leaving Kodo I think I have worked on three movies: Shrek 4 (yes, there is a Shrek 4), doing a jazz flute solo; Martin Scorcese’s Silence; and now Isle of Dogs. They all have been very different processes from each other, but I was the most involved in Isle. After the initial recording session with Wes, I would record tracks in my studio and send them electronically when he requested. I once recorded fue and bells in a hotel room in Ann Arbor, MI, for him. Then he flew me out to Air Studio in London in the fall of 2017 for some final recording work for the film.

SS: You just returned from Australia where you were commissioned to write a piece for the Sydney Symphony Orchestra. How was that process new or different for you?

KW: So much of writing for orchestra is making sure the music is correct on the page. Usually, my compositions feature a lot of improvisation within a rhythmic or melodic framework. For orchestra, I needed to write down everything for each musician, down to specific phrasings and dynamics. I needed to make sure the voices were stacked up properly, that the notations and indications were clear, tempo markings were accurate, etc etc. because we only had a few rehearsals to put it all together. I had many people look at my scores and 99 percent of the comments were about technical issues with the notation, with only 1 percent having to do with issues of musicality or artistry. Having said that, by the end I was having the entire orchestra improvise in certain moments and the musicians seemed to really enjoy themselves!

Adding to the difficulty was that I was a soloist in my pieces, so I couldn’t sit in the audience during rehearsals to fix balance issues and listen objectively. The first day and a half of rehearsals were nerve-wracking, but by the first show, I was very comfortable playing with the orchestra. One reason for this change was I made an effort to develop a rapport with both the conductor, Gerard Salonga, and the members of the orchestra. Luckily, everyone was really wonderful to work with and made the whole process relatively easy.

SS: What other projects are you working on or planning for the future?

KW: I have various concerts coming up over the next couple months: projects with (two) different singers, Imani Uzuri and Alicia Hall Moran; a concert for my new string quintet; an ongoing duet with Fumi Tanakadate – an excellent taiko player and pianist; a performance with the Silkroad Ensemble; a few solo performances; and a concert with tap-dancer Kazunori Kumagai. Because the music is so personal and full of improvisation, I must work with people that I trust and respect completely – and being able to do so is a blessing.

As for coming up in the future, there are a few projects that I’m not allowed to talk about just yet – I had to keep the Wes film a secret for a year – but it’s fun to have secrets sometimes!