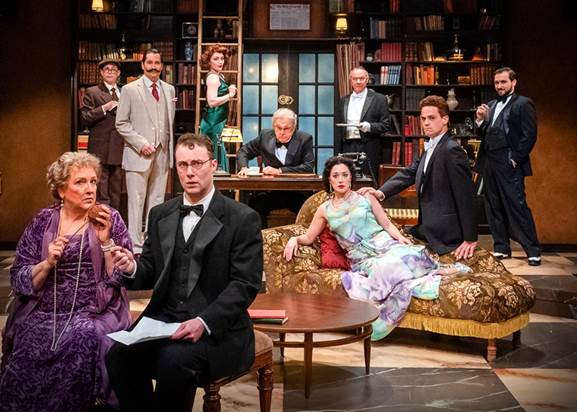 Agatha Christie is known as a top murder-mystery detective-story writer, and her first play script, Black Coffee, will soon be presented at Taproot Theatre. Black Coffee is one of Christie’s many stories focused on detective Hercule Poirot, and in this play, Poirot investigates the sudden death of scientist Sir Claud Amory.

Playing the role of Sir Claud’s daughter-in-law Lucia Amory is Justine Yu-Ping Davis. “It has been a journey to uncover all the layers of what drives Lucia,” Davis said. “So much of the rehearsal process has been discovering how much she and I have in common.”

Davis has long been a big fan of murder mysteries. “One of my first lead roles in High School was in Agatha Christie’s Mousetrap, the world’s longest-running play,” Davis recounted. “Recently, I got to perform in the World Premier of Right Angle Entertainment’s production of Clue! based on the infamous board game.”

So this new project seemed like a great fit. “It is so much fun to live in these temporary worlds of, as my character says, ‘lies and intrigue,’” Davis said. “I had never heard of Black Coffee until I was invited to audition and am thrilled to get to be a part of this tumultuous microcosm.”

Davis relates to Lucia as an outsider whose chief desire is to be loved and accepted. “Having grown up as an expatriate in Kazakhstan, I not only had to integrate myself into Central Asian culture, but then had to re-adjust when moving back to the U.S. for college,” she recounted. “Being half-Chinese also added another element of identity crisis that I am still unraveling.”

Black Coffee was first produced in 1930, but Davis finds that the themes are still timely. “The play is set in the 1930s and Agatha, in her own way, is commenting on topics such as racism, war, and sexism,” Davis described. “Despite there being so many serious topics, however, it is still full of humor, which I think gives you the lesson without you even realizing it.”

Davis is having a great time in rehearsal. “One of my favorite parts of rehearsal is when an actor encounters a line with a dated item that we then have to figure out what on earth it is as well as how to pronounce it,” she said. “Thank goodness for dramaturgs! Some of my favorites are ‘Ebenezer Spraddle’ and a ‘Satan’s whisker.’”

But building a career as an actor has its challenges, Davis reports. “The biggest struggle for me is the fact that so much of this business is based on networking and I have lived in five different cities in the past seven years,” she said. “Having to start from the bottom every time that I move has been brutal.”

As a result, she has sometimes struggled with imposter syndrome. “I am at the point in my career where I am more comfortable with being my authentic self since trying to be what you think someone wants you to be is exhausting,” she said. “I am learning that the world is big enough for one weirdo to find other weirdos that want to make the same weird stuff that you do.”

But that won’t stop her from embracing new performance adventures. “I live bi-coastally in LA and Seattle, and there are several projects that I am deciding on,” she said, “one of which includes dipping a toe into the directing world.”

Davis also has her eye on her dream role: Elphaba in Wicked. “That is the show that made me go into theater in the first place, and, you are probably seeing a theme now, it is about an outsider trying to find acceptance and her place in the world,” she shared. “For this reason, I am especially grateful that I am surrounded by brilliant friends, family, and my incredible husband Hunter that fill me with encouragement.”