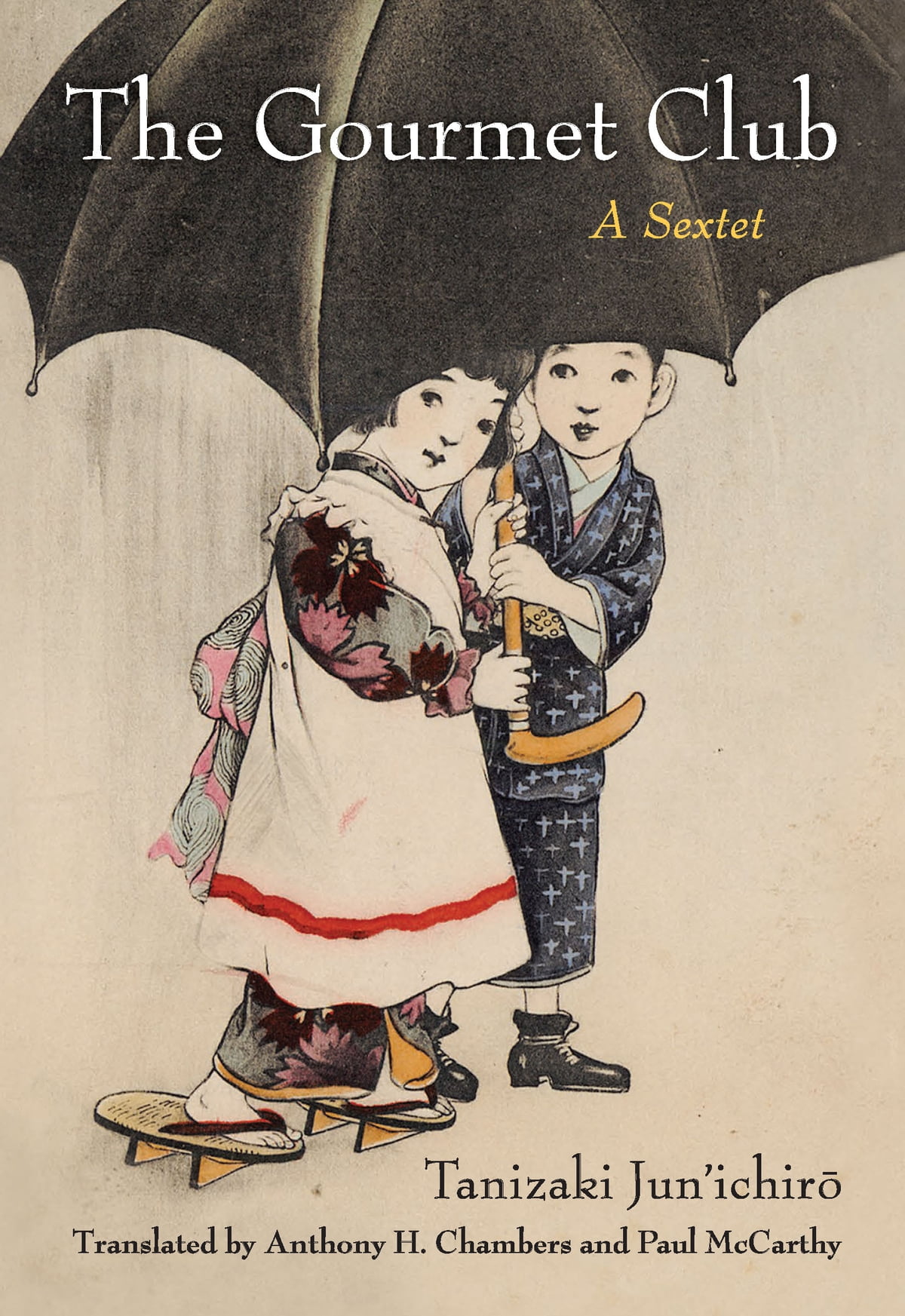 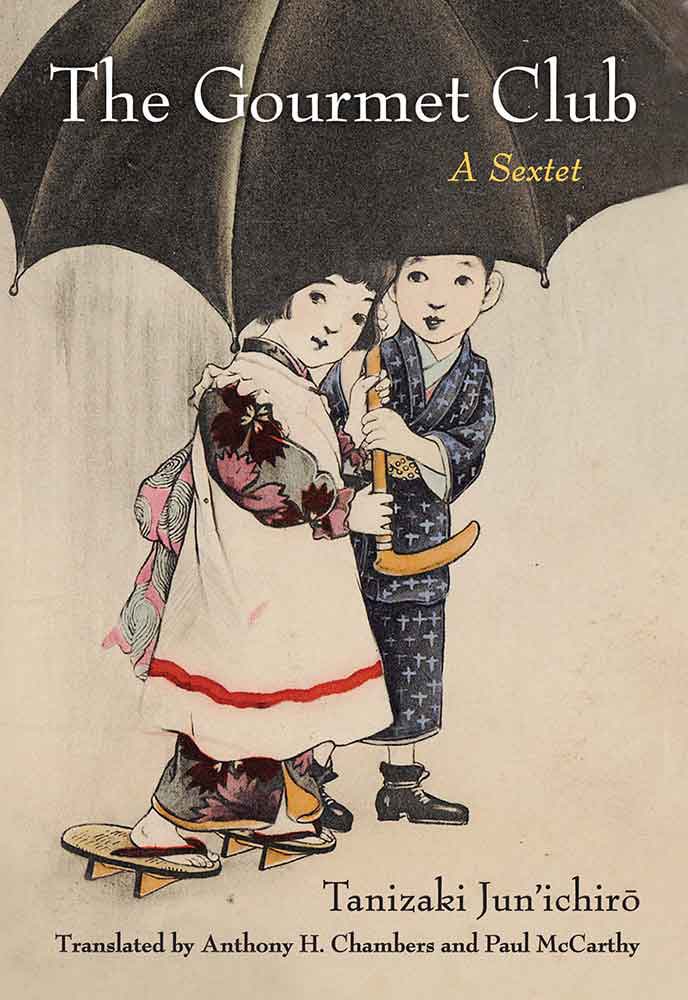 The fascination for, and popularity of, fiction by one of Japan’s most famous 20th-century writers, the sexually fixated and often ghoulish Junichiro Tanizaki (b. 1886, d 1965) continues. As I have explored my own cultural identity through travel to Japan, I pair that experience with reading translations of a wide range of Japanese authors over the years, and today love the works of Japanese writers of the international art community (Murakami and Ishiguro). So, of course, I am drawn to two new English translations of Tanizaki’s short fiction: “The Maids” and “Devils in Daylight,” and a reissue of The Gourmet Club.

Tanizaki was born in Tokyo at the beginning of the Meiji era, when Japan finally opened its doors and minds to Western industrial innovation, military strategy, and the arts, including writing. Although he was born into an upper-class family, by the time he entered college, he had few funds and little time for study; he left the university to pursue various jobs including freelance writing. His first notable work of fiction, “The Tattooer,” was published when he was 25 and focused on a bizarre story of lovers, and it set him along a path of defying Japan’s putatively strict behavioral codes through his writing. Like the Japanese reading public, he showed an avid interest in Western writers such as Wilde, Baudelaire, and Rilke and the fascinating magician of horror, Edgar Allan Poe. In fact, Tanizaki’s brother, the scholar Seiji Tanizaki, was a translator of Poe’s works, which were immensely popular in prewar Japan.

Beginning to sharpen a focus on the images and roles of intensely beautiful female and male lovers and their fixations, Tanizaki undertook a modern language translation of the 11th-century masterpiece, The Tale of Genji, known as the first novel ever written, by the Lady Murasaki Shikibu.

Tanizaki’s most famous book was The Makioka Sisters, a detailed view of the lives and loves of four Osaka sisters as their family sank into poverty during World War II. Although the first chapters were serialized in magazines, the Japanese imperial government halted the publication for its lack of patriotic contribution to the war effort. Thus, Tanizaki left the limelight of the Tokyo literary world and its acceptable political codes and labored over this masterwork in secret until after the war. It was finally published in its entirety in 1949 to great acclaim and made into a popular film in 1983.

“The Maids” is considered a kind of sequel to “The Makioka Sisters,” but was written much later, just a few years before the author’s death at the age of 79 in 1965. Another book of intense and detailed focus on the appearance and backgrounds of, and relationships between, women, it is considerably more delightful, compared to the many depressing characterizations in the Makioka family story. Living in a tightly knit family in a succession of small houses during and after World War II, these housemaids came one after another, from poor rural enclaves in Kyushu or northern Honshu, where many farmers or fisherfolk were impoverished and sent their daughters to service in wealthy homes in major cities. The author’s depiction of these young women in circumstances beyond their control is loving and astute. Some are comely, some are plain, some are intelligent, and some are dull and illiterate. A few attract boyfriends while the other maids either suffer or enjoy arranged marriages back in their home villages. Tanizaki made favorites of generous-spirited ones. I loved the level of detail Tanizaki provided here; this helped me understand the strict rules and behavioral codes the family and its servants lived by in a tight proximity. Every nighttime sigh and sob were heard and understood by all in the house of their employers.

By contrast, the novella, Devils in Daylight, as told by a narrator who was witness to a perceived crime, was serialized in 1918 when the author was in his mid-30s. It is a hyper-eroticized mystery involving two men, their midnight peeping into a silent tableau featuring a perfect female beauty being photographed as she strangled a lover and then her collaborator destroying the body in a vat of lye. But did this incident actually happen? The narrator follows the trail to the discovery of who these people are and where their motivations lie, and he peels back layers of intrigue about his dapper colleague, who introduced him to this bizarre scenario. The story is rather Poe-like.

The third book is a reissue of the translated The Gourmet Club, a set of six unrelated and often disturbing stories spanning Tanizaki’s writing panoply from 1911 to 1955. His characters are surprising: mean children torturing one another, young monks intensely imagining what women are like, and a cross-dressing man discovering “an even weirder, more fanciful, and more disturbing affair.” But most striking is the grotesque 1920s tale of “The Gourmet Club,” in which the protagonist convenes a gourmet club of friends, discovering and boasting of ever more decadent and unusual restaurants and meals. Verging more toward the notion of “gourmand,” with its connotation of excess beyond excellence, the gentleman follows his nose on a late-night walk, discovering a secretive doorway that reveals a Chinese men’s club where the patrons consume incredible and possibly disturbing recipes for banquet food and enjoy tantalizing music and performances by stunning Chinese women. The narrator is drawn to visit this dinner club many times until he concludes that to continue would result in “either raving lunacy or death.”

Tanizaki was disappointed when the Nobel Prize for literature eluded him. Perhaps it is better he died before he could see the award go to his esteemed colleague Yasunari Kawabata in 1968. Is it that the deft English speaking Tanizaki, who also had worked as a film director and writer, and who entertained the foreign press as other well-known authors did not, created books too erotically unusual and macabre to gain world acclaim? In his biography of another infamous Japanese writer, Yukio Mishima, John Nathan calls Junichiro Tanizaki the “the great Japanese decadent.” Widely celebrated for his literary genius, Tanizaki revealed exquisite and extreme fixations as a narrator with the perspectives of a true Japanese aesthete. As readers today, we are grateful for his intense focus on beauty as we use his works to contemplate the deeper role of the female in life, in love, and in obsession.