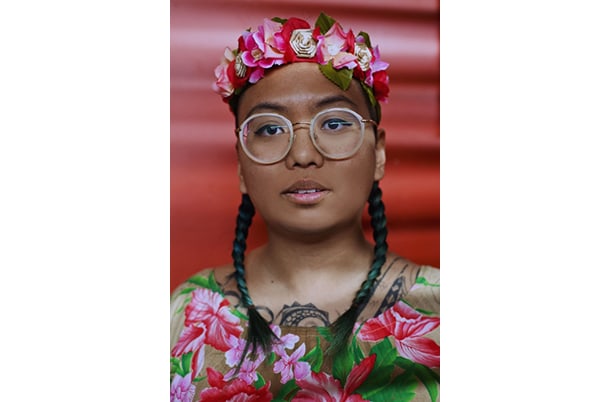 Note: This piece was originally published in Hella Pinay and has been republished with permission.

Seattle-based trans, genderfluid, hard-of-hearing, Ilokano, queer femme ritualist and singer-songwriter Julz Bolinayen (stage name: Julz Ilang-Bulan) evokes raw, tender emotion through vulnerable lyrics and melancholic melodies on their debut album, Equinox Rising. Like water that ebbs and flows, so does this album in its emotional journey exploring grief, longing, and heartbreak. They take us through a beautifully nuanced path that speaks to the universal feeling of sadness, and how to sit with that emotion.

Throughout the five-track album, they simultaneously honor ancestral wisdom while encouraging listeners to cope and heal their own grief and longing. Julz presents each song as a tender reminder that we have the permission and agency to be vulnerable in our healing, to be tender with ourselves, to be unapologetic in our journey with how we express and explore emotion.

“If it’s anyone in my life who teaches me to take pride in my Ilokano roots, it’s my friend Julz,” says emcee/singer-songwriter/poet Kimmortal. “Their album is a lyrical and hypnotic story of healing: the phases of the moon and it’s direct reflections on our own journeys to love. All in Ilokano Harana style reclaimed with that queer kapwa inspired twist!” Kimmortal names off some of the tracks on Equinox Rising and the feelings they evoke: “‘Mannakigubat’ means ‘warrior’ in Ilokano. The motherland as our long lost lover that we have to leave: unlock our power, teach us how to dance… a call to dance as warriors in this diaspora. In ‘Rising’, I hear all the elders in my life who have ever told me to find time to rest. A reminder to let go in the process of loving and healing. ‘Point of Love’ is the perfect song to end off with, our spines are realigned with the earth, sky, and ancestral knowing.”

I got the chance to chat with my dear friend Julz about their album, being Ilokano, and the importance of having more QTPOC representation in music.

Clarissa: As a QTPOC artist/musician, why was it important for you to create this album?

Julz: As a queer, trans/gender non-conforming, brown femme with a hearing disability, it was not just important, but necessary for me to create this album. When I was a kid, I dreamed of becoming a full-time indie musician touring, performing and collaborating with my musical inspirations. That was my dream, which I kept to myself, as I created my own arrangements of covers and wrote songs I never shared. When I was 25, I became deaf in my left ear, and it was devastating for me as a lifelong musician. Nowadays, I view this hearing disability as a gift. I’ve learned various ways of listening that doesn’t rely on my ears. When I was 29, I wrote a song I finally felt proud of and open to performing publicly. From there it felt like the right time to finally create and release my album when I turned 30. This album is a gift to my current and past self, my QTPOC community, my LGBTQIA+++ Ilokano & Filipino community, and my ancestors.

Clarissa: Why is it important to create more visibility for QTPOC artists/musicians?

Julz: Because we are fucking incredible! I want to see what I didn’t get to see as a youth. I want to see limitless possibility. I never saw visible QTPOC musicians on the media, or around me, until YouTube launched back in 2005. I was 17 years old, searching for QTPOC singer-songwriters. It became a pastime for the next several years. I had a playlist and I subscribed to everyone I found. I was so eager to know I wasn’t alone and I wanted to connect with people in person. I remember seeing so many Filipino musicians on YouTube back then, and their careers launched from there until now. But from that era, I never knew of an LGBTQIA+ Filipino musician who went on to become a musician beyond YouTube. Filipino/API spaces still have so much work to do when it comes to supporting and elevating LGBTQIA+ Filipino/API musicians, not just simply tolerating or including us without dismantling the cis-hetero-normative ways those spaces operate. It’s not just Filipino/API spaces – it’s all music spaces and platforms.

These days, I know of, or personally know, several QTPOC musicians locally and internationally, whether they are mainstream musicians or more local or indie musicians. All of them inspire me. They are such brilliant beings. We continue to blossom into what we dreamed of when the majority of the world does not appreciate how incredible we are. We are more than just being queer and trans people, but those are integral parts of us as well. Visibility is not just about being seen and included. It’s about honoring our whole lived experiences and identities as QTPOC musicians.

Clarissa: Was the process of creating the album healing?

Julz: Yes, I felt like it was a journey of believing in myself and allowing myself to heal and feel joy. So many people believed in me, some doubted me, and yet I was struggling to believe I was a great musician and that I deserved to dream of creating an album. Self-doubt is a powerfully destructive thing. I feel like creating this album allowed me to dream of possibility and reach for the stars. I love sad songs and love songs with earnest lyricism and acoustic instruments, songs where I can feel and hear the raw vulnerable emotions of the person singing and the instrument in tandem. I write sad songs, but through that, I can heal and feel joy. Without grief, there is no joy. You wouldn’t need to heal if there wasn’t trauma, sadness, grief, heartache, rage, anger, etc. Unfortunately, we live in a world where all of that exists. I create music to feel like I have agency to heal while living in this wild, volatile, terrible and beautiful world.

Clarissa: Why do you specifically highlight being Ilokano vs. just being Filipino?

Julz: There are so many ethnic groups and tribes in what is known as the islands of the Philippines. We all have our own languages, food, culture, traditions – we are not just one homogenous group of people. That is why I distinguish that I am Ilokano and not just Filipino. Ilokano food, culture, tradition and language is vastly different from Tagalog – that is only one example of so many others. I am proud to be an Ilokano, and I am grateful for the privilege of continuing to learn about our amazing culture and people. It excites me when I learn something new and can share that with fellow Ilokanos and Filipinos.

Clarissa: As an Ilokano, how do you incorporate or harness inspiration from Ilokano songs/haranas into your own music?

Julz: I’m such a nerd and love researching Ilokano poetry, art, music, traditions. When I learned that Ilokano folks songs and even haranas (serenades) existed, I was so stoked. There is something about singing in your native tongue that evokes a deeper feeling of love, longing, and grief that English simply can’t express through words. It’s more than words, it’s the feeling and emotion. One day, when I’m able to translate all my songs into Ilokano, I know they’ll sound and feel even more expressive. I might reach the emotions I’ve always meant to reach in songs where I feel like there’s something more. I used to think my songs were too sad, too dramatic, too romantic – then I read Ilokano poetry from the 1600s-1900s and heard an Ilokano harana. Wow, actually, my music is not nearly dramatic enough – I gotta make it more Ilokano!

Clarissa: What do you want listeners to take away from the album?

Julz: I want listeners to feel a connection with the emotion I express through my songs. My lyrics can be taken literally, but there’s so much more meaning and depth than words. When I sing, I want my listeners to feel the song in their heart, on their skin, in their bones, in their spirit – because that’s how I feel when I sing. Can they feel what I feel? Does this or that song take them back to a specific heartbreaking memory or experience? Depending on how I am feeling, sometimes when I perform, I will relive moments that have inspired a song. It’s an intense feeling. I want listeners to know they’re not alone and to find solace and healing in my music. I want my music to offer empathy when it feels like it’s hard to express a feeling or emotion on your own. I want listeners to know this isn’t just a labor of love, but a deep unraveling of self-doubt, and journey of acceptance, worthiness, and possibility. You can do whatever the fuck you want to do. Don’t let anyone, especially yourself, get in the way of that.

You can catch Julz headlining at Wing Luke’s Jamfest on Thursday, July 19th at Chiyo’s Garden & Nihonmachi Alley. For more of their work, visit https://www.julz.live/, follow them on Instagram @julzilangbulan, or support by purchasing their album, Equinox Rising on Bandcamp!