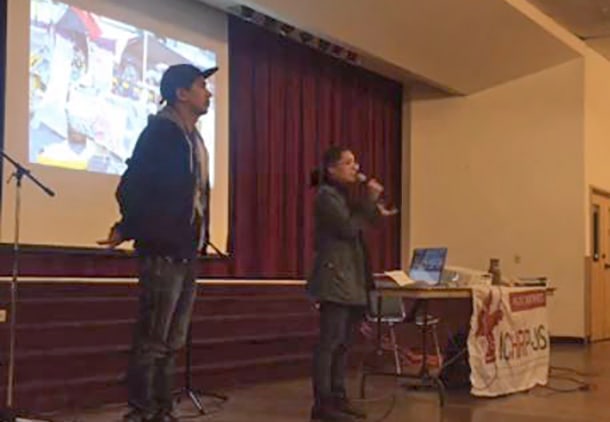 Two U.S. journalists and filmmakers visited the Seattle Filipino Community Center on November 7 to discuss their experiences covering strikes in the Philippines this summer.

Hiyas Saturay and Eric Tandoc, who work for the AlterMidya Network, spoke of their work covering the NutriAsia strike, which has been ongoing since May. Workers from NutriAsia, which produces food seasoning and sauces, have been demonstrating because of low wages, contractualization that makes them more vulnerable to exploitation, and unsafe working conditions without proper protective equipment.

Saturay and Tandoc presented footage from a June 14th dispersal led by the Philippine National Police of the picket line that showed law enforcement hitting protesters with sticks and using riot shields to push strikers.

In late July, the tension escalated when, while covering the strike, Saturay and Tandoc were arrested and beaten while much of their equipment was confiscated by security forces. They were two of 19 people arrested on July 30 and sent to jail.

“During that moment, you know, I was thinking ‘oh this is it right here,’” Tandoc said.

Just before the dispersal, an ecumenical mass was being held at the picket line near the gates of the NutriAsia factory.

“The meaning of solidarity is to put yourself, to see yourself, in the other person,” Tandoc reported the speaker said during the mass.

Tandoc said that he was not given proper medical care despite constant pain in his ribs following the beating, the preceding moments of which were filmed and shown to the audience at the community center. Just before the two left for the United States weeks later, Tandoc went to a doctor who told him he had a fractured rib.

They hid the SD cards for the cameras in their clothes while they were in jail because they wanted their experiences to be understood and seen widely.

After two days in jail and around-the-clock work by the National Union of People’s Lawyers (NUPL) in the Philippines, Saturay and Tandoc were released.
Despite the violence struck upon NutriAsia workers in July, they continue to strike in hopes of earning better salaries and working conditions.

Benjamin Ramos of the NUPL, who provided legal assistance to the families of nine slain sugarcane farmers, was recently murdered on the island of Negros in the Philippines. Ramos is the 34th legal professional to be killed in the country in the last two years, according to a report by Al Jazeera. Critics blame Filipino President Rodrigo Duterte, who took office in July 2016, for creating an environment that turns a blind eye to violence.

“The situation is really worsening in the Philippines, and these police, military, they’re emboldened because the president himself, the commander in chief, is the one who’s urging them to do these violations,” Tandoc said. “He basically gives them a greenlight to totally violate people’s right to life.”

Saturay and Tandoc were also critical of U.S. military aid given to Duterte’s “fascist regime.” As a safeguard against threats from China, the United States recently decided to partner with the Philippines in an increasing number of military exercises.

The two journalists called on those in attendance to protest the U.S. backing of Duterte and urge politicians to stand up against this.

“That’s our tax money, U.S. tax money that’s paying for this,” Tandoc argued in closing. “This wouldn’t be able to happen if it wasn’t funded by the U.S. military aid.”