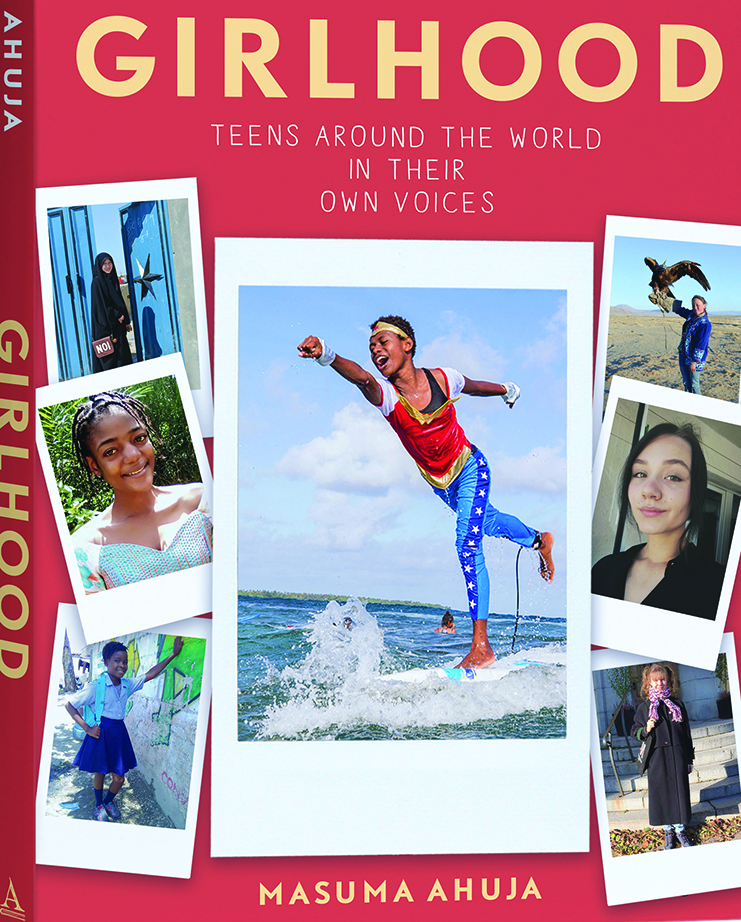 Journalist Masuma Ahuja uses the written word not only to tell stories, but also to amplify the stories of others. Building on her work as both an independent and network journalist, she has expanded into multimedia, social media and digital platforms – along with writing a book entitled Girlhood: Teens Around the World in their Own Voices.

Ahuja began to conceptualize Girlhood in 2017 and 2018, when she was traveling around South Asia reporting on women’s and girls’ lives. “I started getting frustrated with how the stories of girlhood are traditionally framed in our news coverage,” she recalled. “Most headlines and stories feature stories of sexualization, victimization or exceptional girls fighting back. These are important stories, but I also wanted to understand what ordinary girlhood looks like, away from these headlines.”

Her focus became the everyday life of girls in Asia. “I wanted to know: what do girls in Mongolia and Missouri and Mumbai stay up nights dreaming or worrying about?” she said. “What do they chat with their friends about or fight with their parents about? How do they spend their days?”

This inquiry takes Ahuja back to her own childhood and her earliest memories of journalism. “Some of my earliest memories of watching the news are of Barkha Dutt‘s coverage of the Kargil War,” she recounted. “I remember that I really started engaging with the news at that point. I was nine years old, and I really wanted to understand more, to know more, about what was happening, why it was happening, and how people were impacted.”

At age 11, Ahuja moved with her parents from India to the U.S. “My parents had always subscribed to newspapers and watched the news every night, and this didn’t change when we moved continents,” she said. “At this point, engaging with the news became a way of understanding my new home.”

In high school, Ahuja had been the editor of her school paper, while in college, she launched a magazine. “Growing up and living in different countries, I’ve always been deeply aware of how little we understand of the world and each other,” she asserts. “For me, journalism has always been a way to ask questions for a living, and to try to understand a little more.”

Along the way, Ahuja has taken advantage of the contrasts between working independently and writing for CNN and the Washington Post, citing those media outlets as great learning experiences. “I learned how to do journalism well – how to ask good questions, how to shape stories, and how to pay attention to the details and the big picture,” she said. “It also gave me a community of curious and creative people.”

She then took those skills out into the wider world. “Being an independent journalist was a way for me to pursue stories and series that didn’t fit neatly into any single news organization’s remit or report,” Ahuja said. “It gave me space to explore and experiment, at my own pace.”

As part of this independent work, Ahuja received a grant from the International Women’s Media Foundation for a project covering women’s migration from Sri Lanka. “Millions of women have migrated from Sri Lanka to the Middle East for jobs as housemaids and nannies,” Ahuja reported. “They migrate often for economic reasons, but upon getting to the Middle East, they often end up working in conditions akin to modern-day slavery, at worst, facing abuse by their employers, and at best, unpaid and locked in their homes.”

This short-term project extended into more than a year of living and reporting in Sri Lanka, and Ahuja continues to work on a project related to her research. “As an (im)migrant multiple times over, the daughter of immigrants, and the granddaughter of refugees,” she said, “I was drawn to this story because I wanted to understand more deeply why we migrate and how it impacts us and our relationships.”

She contends that these issues concern millions who must make both logistical and emotional adjustments. “Most migration stories focus on the journey, assimilation and horror, but I’m more interested in questions of life,” she said. “How do you raise a child on WhatsApp from thousands of miles away? Can love survive the distance, if your relationships are long distance for years? If home changes the moment you leave, can you ever return home? And just as importantly, when structures and institutions are not set up to protect migrants who are inherently outsiders once they cross borders and leave home, where do they, or we, find and build power, how do we make things better?”

Her interest in these experiences overlapped with her desire to tell girls’ stories, as her book Girlhood is based on a newsletter and series that she wrote for The Washington Post’s The Lily. “The original series in the Lily featured 12 girls from 10 different countries, and it felt like just a beginning,” Ahuja said. “There’s so much wonder and power in being able to see the world through girls’ eyes, and that’s why I decided to expand the series into a book, which features 30 girls from 27 different countries, including some of the girls from the original series.”

The perspective of girls is paramount, to Ahuja, for attaining a global understanding. “I asked girls to share diary entries, which I supplemented with interviews, reporting and research to provide context about their communities, countries and circumstances,” she said. “We really get to see their lives, and their worlds, through their eyes.”

Girlhood was published in February 2021, and because of the ongoing COVID pandemic, Ahuja’s book tour was entirely online. “Some of the girls from the book were able to attend some of the events, and we were able to reach audiences around the world,” she said, “which was only possible because we were doing things virtually.”

But Ahuja says that her book is just the beginning of centering girls’ experiences. “We run storytelling workshops, publish girls’ voices, and are creating a kind, curious, and creative community for girls and young women,” she asserted. “People can learn more and get involved at girlhoodstories.com.”