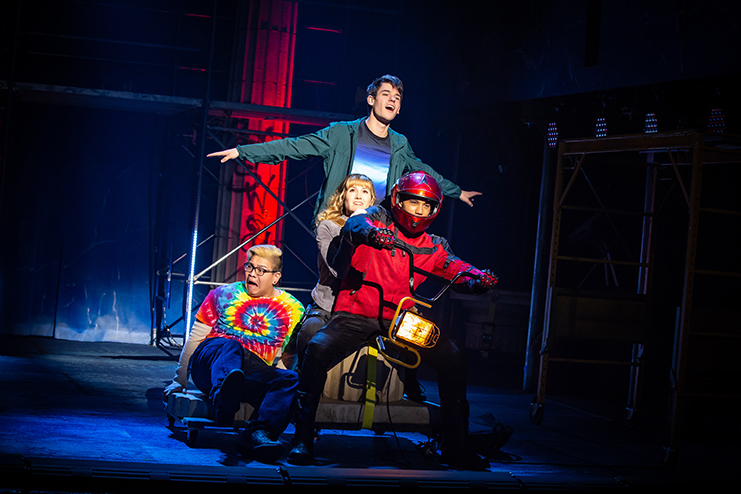 Rick Riordan’s novel The Lightning Thief has been transformed into a musical and is coming to the 5th Avenue Theatre. With the book by Joe Tracz and the music and lyrics by Rob Rokicki, the Olympian god Poseiden’s son Percy is on a quest to prevent a war between the gods, even as he struggles to control his own newfound powers.

Alongside Percy is his best friend Grover Underwood, portrayed by actor Jorrel Javier, who is a huge fan of the Lightning Thief series. “I attribute the book as being the catalyst that sparked my love for Greek mythology,” Javier said. “So when my agents got me an appointment to audition for the show, I was beyond stoked.”

Javier has always appreciated how mythology addresses human curiosity. “I’ve always found it fascinating how it all stems from the aspect of answering the ‘why’ in everything,” Javier said. “These myths were essentially stories passed down as explanations and I love that.”

He also enjoys how theatre brings this mythology to life. “I think there’s a certain magic in musical theatre that allows the audience and its actors to live out the fantasy that they don’t always get to,” he said.

This particular fantasy entails playing the role of a half-man, half-goat creature called a satyr. “I love being able to live vicariously through the characters I play,” Javier said. “It gives me a creative high that no other art form gives me.”

In this role, the clothes really do make the man-goat. “My goat legs have become my favorite part about playing Grover,” Javier said. “They’ve honestly become an extension of my lower half.”

Becoming at home with his character has been important, because Javier has been touring the country with the show, performing on a consistent schedule. “It was a little intimidating joining a company that had so many original cast members returning because I was afraid that I may feel alienated or left out,” Javier said, “but they have been the most loving and caring cast and I’m extremely fortunate to have them in my life.”

In addition to fitting in, Javier has also found it important to represent his Filipino heritage and the wider Asian American community. “Growing up, I never had anyone in this field to look up to,” he said. “There were very few Asian actors in musical theatre and even fewer playing roles that weren’t stereotypically Asian.”

But the response he has received has been gratifying. “So many people have come up to me at the stage door, expressing how inspired and happy they are to see an Asian on stage,” Javier said. “The joy in their eyes and the pride in their voice motivate me to continue doing good work so that they can look at me and know that they too have a place in this business.”

Javier won’t confirm what role comes next after Grover, but for now, he seems overjoyed. “It’s been the most incredible experience,” he said. “I get paid to be a part of this amazing show, travel, and eat my way through the country. It’s such a blessing.”