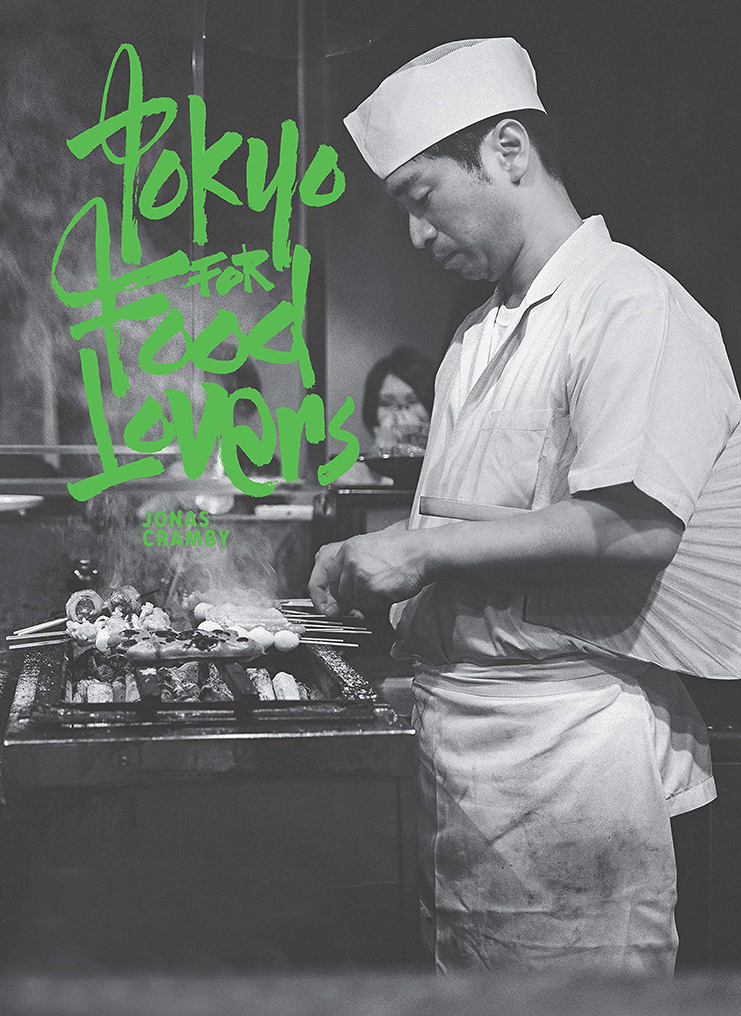 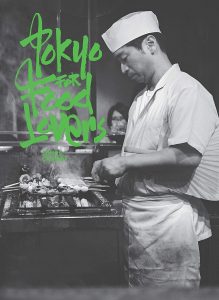 Cramby has obviously established a “write-about-food” comfort zone niche for himself.  His newest work, Tokyo for Food Lovers, is a guide that not only tackles what and who it takes to get yum-del-luscious food onto your plate, but identifies the places that will do it.

The freelance journalist, author and restaurant critic posts his food blog (zeroing in often on American fare) in a Swedish magazine (Café) and was a restaurant reviewer for Metro, a free daily newspaper in Sweden until its demise in August 2019. His many followers on Instagram and subscribers to his YouTube channel (who number in the thousands) likely helped him synch a 2009 Chronicler of the Year award.

A lover of tacos and Mexican food, he gave his daughter the middle name “Margarita”, vowing if he had another, he would name her “Carnita”, after his favorite taco filling.  These revelations, along with his writing, underscores the playful style and joie de vivre, that make reading his book a more than pleasant diversion.

Tokyo for Food Lovers is a 176-page tear through the Land of the Rising Sun capital of Japan. A megalopolis of over 14 million people comfortably cocooned with approximately 160,000 or more restaurants (and climbing), signals that the depth of Tokyo’s food culture is daunting to say the least.  Not the first and certainly not the last, Camby has weighed in with his own bid to champion one of the finest finger-lickin’-good foodie destinations on earth.  “It has,” he proclaims, “the best raw produce, the most brilliant chefs and the highest number of Michelin stars (226) in the world.  Tokyo is a city for which extreme care and concern for detail is not the sole preserve of fine dining – it exists everywhere.”  The author is not alone in his lofty kudos of the city’s edible endowments. Top restaurant review sites, professional guides, and newspaper/magazine restaurant critics have long written glowing reports of the formidable Tokyo dine-out scene. 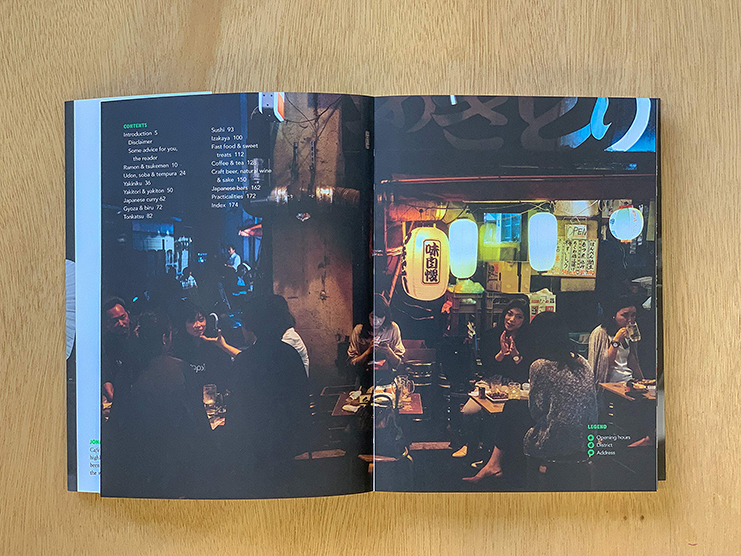 A quick thumb through the index of his alphabetically go-to restaurants and eatery choices is a jolt.  His first citation is – hang on to your credulity – 7-Eleven, on page 123!  In the prime spot all its own: flagrant, confounding, irksome. I would have snorted aloud, had it not been for the fact that through my travels in Japan I have learned that the Nihon (Japan) convenience store, a counter-part of the top ranked billion dollar U.S. small business chain, has earned high esteem not only from the Nihongo (Japanese), but from visiting travelers across the globe.  Proclaims Camby, “In Sweden, I wouldn’t even want to buy an apple (here) but in Tokyo I even happily eat sushi from there.” High praise reinforced by a full-page color close-up of a hungry mouth devouring a sumptuous, nori-wrapped nosh of sushi, directly across from a color photo of an egg sandwich (“So fluffy, buttery and eggy that it defies description.”). States Camby, “Even if there hadn’t been so much other good food in Tokyo, I would be completely satisfied with what I can find (there).”

A compelling aspect of this at-first-glance modest-in-demeanor paperback: it’s chockablock stuffed to bursting, with photos of chefs, diners, plated foods, restaurants and street scenes. Enhanced with detailed histories, interviews, comments, factoids and asides, it convinces the reader, by the end of the book, of having had a full-on experience of the Tokyo scene. Fostering a growing yen for ankooru (an encore).

Cramby’s conversational approach leads you willingly through his plate-to-mouth-to-plate journey through the yokocho (alleyways) of his food-obsessed quests, merrily spewing information regarding the dishes, the ingredients, the chefs, the styles of cooking. He covers well known, established restaurants (such as Michelin one-star Nakiryu and three-star Sukiyabashi Jiro), along with off-the-beaten-up-path of unfamiliar eateries and izakayas (small bars serving inexpensive dishes and snacks), like Shinjuku’s Piss Alley, which, I’m guessing, is not a place where yoyaku (reservations) are an imperative.

Neither would yoyaku be essential at trendy Japanese food automats, like the Ramen Machine, where Cramby takes and provides the reader with an instructional guide on how to select the kind of ramen you would like, and how to customize the ramen to your wishes. It’s this continuing revelatory experience on finding first-rate food in atypical places (basements of department stores, train and bus stations, temple and night markets) that are a constant surprise and delight.

In addition, he provides, for the uninitiated, the rules of etiquette in diverse situations: how to decipher menus; what to expect and how to navigate a Japanese ramen queue; how to actually brew a real cup of Japanese pour-over coffee. And the lists go on and on and on. He recommends shopping places for special items, like kitchen-related gifts. And who would have guessed that eating flame broiled chunks of meat on a stick (yakitori) would deserve a highly detailed, precisely illustrated six-step lesson? If you think this a frivolous act, think again. After the yakitori mind expanding, life altering education, you will never look at  sticks of meat in the same way again. Ever.

Cramby divides the chapters of his book into eleven food types: ramen and tsukemen, udon, soba and tempura, yakiniku, yakitori and yakiton, Japanese curry, gyoza and biru, tonkatsu, sushi, izakaya, fast food and sweet treats; and devotes three segments to distinct groups of drinking venues: coffee/tea, beer/wine/sake, and bars. The other three sections of the book are given to the: introduction (disclaimer and advice to the reader), practicalities (pragmatic, useful information for first time travelers in Japan) and index (an alphabetical list of 99 restaurants and establishments covered in the book).

Speaking of the introduction: it begins with a disclaimer, which provides an insight into Camby’s thought process and perhaps why his non-stop production of books continue to draw audiences. “. . . it is important that you understand that (this) is not the final guide to this culinary megacity,” he declares, “but more a reflection of the best of my personal interests, obsessions and hang-ups.” A simple, humble, honest statement which captures your heart, your mind, and your trust cementing a bond between the author and a reader’s willingness to follow his leads.

Curiously, the paperback comes cloaked in two covers: both with identical title fonts and colors, but distinctly different graphic images and information. The inner front cover (attached to the book) sports a full-color, tempting tonkatsu portrait plated and ready for consumption; on the attached back cover is a street scene photo of buildings and people going about their business. 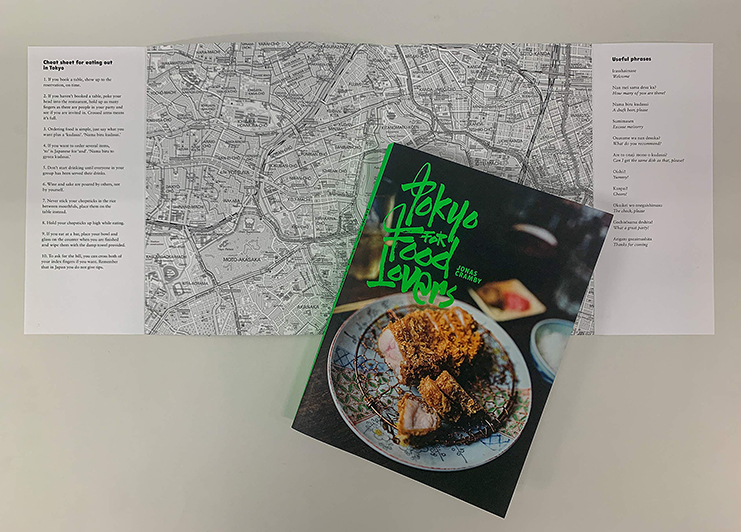 Of greater interest is the second outer removable cover.  It sports a black-and-white photo of an earnest izakaya chef of the Fuku Yakitori pub, deep in thought, concentrating on the yakiniku sizzling on the grill, while customers wait for their orders.  Printed on the inside of this removable cover is a detailed map of Tokyo with its various neighborhoods defined.  In addition, printed on either side of the map, are a handy and highly useful (if a newcomer to Japan) ten-step Cheat Sheet for Eating Out in Tokyo, and a convenient, practical Useful Phrases list.  Neither map nor Cheat Sheet nor Useful Phrases are available in the book, so the removable cover appears to be a bonus supplement.  Whatever the reason for its existence, it’s an excellent perk!

Each recommended establishment has the following information: address, area of the city, days and times open.  Missing are phone numbers and websites which would be a handy addition.

That aside, Cramby has written an excellent all-purpose guide to one of the best and largest world class cities on Earth — not only for the seasoned traveler (who will still find interesting, little known useful bits of information about Tokyo), but the neophyte stumbling about in need of practical, sound advice to survive a novice’s journey in Wandārando (Wonderland).