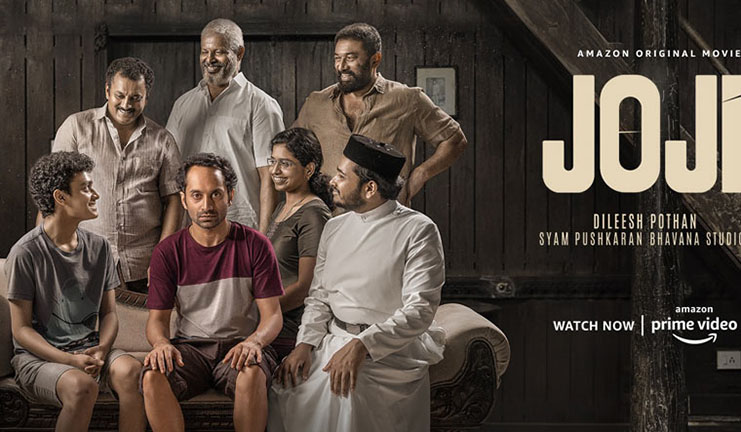 Joji loosely melds the narrative lines of Macbeth and King Lear into a dark film set in a Kerala rubber estate where a powerful patriarch controls the lives of his three sons, daughter-in-law and grandson. Joji is his youngest son who has dropped out of college and is constantly hatching get rich schemes that seldom succeed. The father, PK (PN Sunny), epitomizes a Kerala machismo—virile, physically and psychologically violent, controlling and alcoholic. He rules the home with an iron fist and his sons are terrified yet dependent on him. He suffers a stroke and almost dies but recovers after an experimental surgery. From a man who could single handedly move rocks that his workers could not, he becomes a wheelchair bound invalid.

The sons each carry their own burdens:  Jomon (Baburaj), the oldest, is an alcoholic and is divorced with a teenage son; Jaison (Joji Mundakayam) is married to Bincy (Unnimaya Prasad) and is the meek son who runs the patriarch’s daily business affairs; and Joji (Fahadh Faasil ) is the ne’er do well who resents his father’s violence and control, but is unable to escape any of it. The teenage grandson, Popy (Alex Alister) watches and absorbs this dynamic of toxic masculine family relationships. He says very little but does have a key moment in the beginning of the film when he buys an air gun using stolen money from his grandfather and thus introduces a weapon capable of inflicting fatal wounds at close quarters. When the boy shoots at a rubber tree and the sap oozes from it, the scene tells us much about how the rubber baron’s family narrative will play out.

The ill patriarch’s health draws the three sons into dreams of inheritance and how their property might be distributed. The church (the family is Syrian Christian) enters the family drama when the patriarch is dying to offer inane platitudes and rituals only to have Jomon violently disrupt the last rites and take his father for life-saving surgery. When the father rallies, Joji acts. Joji orchestrates PK’s death and Bincy suspects that he has blood on his hands. When rumors fly about the patriarch’s death in the community, Joji adds another murder to his list of crimes and eventually tries to take his own life. The ending is ambiguous with a paralyzed Joji in the hospital being interrogated by the police.

While the film has a Shakespearean element to the plot, its focus is really on toxic masculinity in Kerala culture and the inter-generational impact of such control and violence. We see Jomon’s broken marriage and alcoholism, the servant-like status of Bincy who is perpetually in the kitchen, and Joji’s failure to launch as part of this dysfunctionality. The grandson’s future is left ambivalent—he is now an orphan and is likely going to be raised by his uncle Jaison and aunt Bincy. What will his future hold? Will he be violent too?

The film was made in 2020 in the midst of India’s COVID-19 crisis. We see the masks and the quarantine referenced and also the problems with the medical infrastructure. The masks used erratically and infrequently by some members of the community speak to the culture of death surrounding the family and also heightens their isolation from a larger community and the absence of outlets for their frustrations. The film is well-paced and the acting is powerful yet understated. As with the recent Great Indian Kitchen, its critique of gender and family dynamics make it well worth watching.