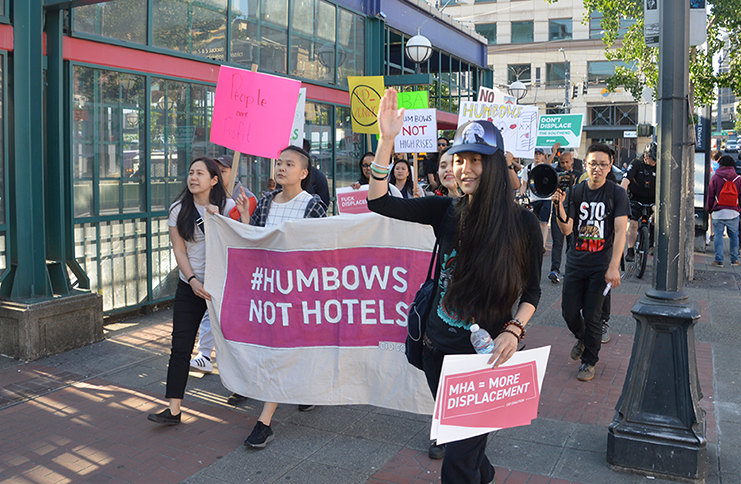 On May 31, a rally against displacement and gentrification in the Chinatown International District (CID) brought a small crowd to Hing Hay Park on a sunny afternoon. Around 20 people marched from the CID to the Pioneer Square offices of Koda condos, a controversial market-rate condo project under construction next to Hirabayashi Place. After returning to the CID, the march becoming an informal “walking gentrification tour” of the neighborhood and other controversial development projects. Mounted on bikes, Seattle police officers followed alongside the marchers.

A rally before the march, organized by CID anti-gentrification group Humbows Not Hotels and environmental justice organization Got Green, was focused on the “crisis” of displacement, “of people being ripped from their homes, ripped from their communities,” said Jill Mangaliman, executive director of Got Green.

The march was part of a nationwide week of action against gentrification and displacement in Chinatowns throughout the U.S. and Canada, organized by the Coast to Coast Chinatown Solidarity Network at the end of Asian Pacific American Heritage Month.

Earlier in the week, community members in Los Angeles’s Chinatown marched against an entirely market-rate development project in the neighborhood, demanding a moratorium on development until neighborhoods needs, such as long income housing, are addressed. In New York, members of the Chinatown Tenants Union organized to expand tenant protections in the city.

Recognizing the original displacement of the Duwamish people from Seattle, the May 31 rally was opened by a welcome speech from Ken Workman, a Duwamish Tribal Council member and descendant of Chief Seattle.

Karen Sakata, owner of Bush Garden restaurant and bar, also spoke. Bush Garden is housed in an historic building owned by developer Vibrant Cities, which plans to build a 17-story apartment project in its place.

Sakata, a third generation Japanese American with family roots in the CID, shared memories of visiting the neighborhood as a child. Members of her family managed historic single resident occupancy (SRO) hotels that now mark the architectural identity of the CID. “In regular grocery stores you can’t find all the foods you’re used to eating at home,” Sakata said. “This is the neighborhood where you can come, see people that look like you, get food that you’re comfortable with, and this is home.”

Bush Garden served as a gathering place for weddings, community fundraisers, family gatherings and celebrations, Sakata said. “That building actually tells a big part of the story of Japanese American history in this neighborhood,” she said. “I really feel like it’s worth saving, it’s worth telling the story, in this day when immigration is such an issue nationwide.”

“We have the places where people lived when they first came here,” Sakata said. “We have a story to tell, and to lose the capacity to tell our story and to share it with all people who come to Seattle, I think it would be a great loss for everyone.”

“It’s so important for us to break down the rationale and the logic which these property developers and these city heads use to justify gentrification,” Wong said. “In Chinese, ‘to gentrify’ is literally ‘to make beautiful’….And we know that when they say to make beautiful, they mean make beautiful for white tourists, for rich folk.”

Wong explained: “They don’t mean beauty in the complexity and the texture of every-day working class life of every day immigrant workers.”

When SPD raided the massage parlors, “they used this rhetoric of white saviors trying to rescue these poor, trafficked Asian women,” Wong said. “The reality is that a lot of the Chinese and Asian women who work in massage parlors, some who do sex work and many who don’t, they do what they do because they live in America. An America that’s racist, that’s anti-immigrant, that hates on Asian folks, and that will see their labor as always cheap and disposable…. What these women who work in massage parlors need is culturally-accessible healthcare, culturally-accessible ways of making money, sustainable wages so they don’t have to work 16 hours in the massage parlor,” she said.

Wong said the services these women need are likely to disappear as new construction projects change the neighborhood. “The rich folks who live there are not gonna be the ones who need and access these services we need around here.”

Edgie De la Cruz, a young member of InterIm CDA’s WILD program, spoke about the challenges facing CID elders as the neighborhood changes. “With displacement and the new high rises, elders are faced with difficult choices,” she said, such as the choice of living in expensive apartments far from people who speak their mother tongue. “We need to keep our community affordable and for people, not for profit,” she said.

From Hing Hay Park, marchers walked to the construction site of Koda condo project, chanting rhyming slogans against developers and booing the high cost of units at Koda (which range from $300,000 to over $1 million dollars each).

Marchers then walked through Pioneer Square to the Koda condominium sales gallery, where they chanted “Boba not Koda.”

The march stopped at a Hilton Hotel nearby, where workers are negotiating a contract. A hotel worker addressed the marchers, saying workers there are burdened with high healthcare costs, and many don’t make much more than minimum wage.

After returning to the CID, marchers stopped at other controversial construction sites in the neighborhood where predominantly market-rate housing is planned or built, including the Publix Hotel, Uwajimaya and Bush Garden, where the march ended.

Across the street from Bush Garden, Robert Gavino, who led chants and conducted the informal tour of sites during the march, reflected on the day with the marchers. Gavino said there is a pattern in what the march was calling attention to. “There are all these people who are out of touch with what historically and to this day continues to be Chinatown International District,” Gavino said, including developers “trying to make this into the next Capitol Hill and South Lake Union.”

Gavino spoke about the long history of activism in the CID. The neighborhood’s brick buildings “gave workers a common place to organize, to build, to become powerfully-dangerous together, just like we are now,” Gavino said. “We’re fighting to continue that legacy of resistance. People will keep calling that legacy old, poor and dirty.”