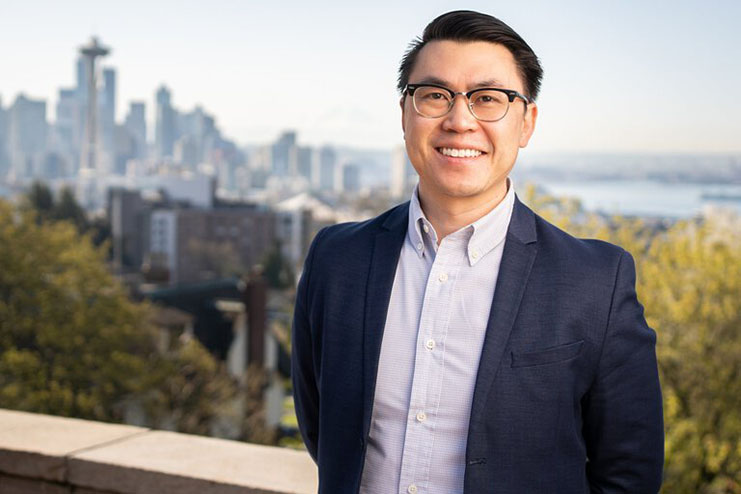 Dow Constantine has held office as King County Executive, the highest position in the county government, for 12 years. Constantine has never had a challenger quite like state senator Joe Nguyen, who announced his candidacy April 27.

The West Seattle democrat says he has “no issue” with the incumbent – afterall, he was Constantine’s page at 14 and volunteered on his 2009 campaign. Still, Nguyen says that “what we’ve been doing for the past 10 years is not good enough.”

Though the position is nonpartisan, both candidates are democrats. Nguyen says he is not challenging from the left, but is part of a larger cultural push against the “status quo.”

“It’s hard to create systemic change when the people in power benefit from this system,” Nguyen said.

He notes that the state legislature has seen its most diverse slate of lawmakers bring many progressive wins in 2021. Nguyen says this is “no accident.”

For example, Washington lawmakers have been trying to fund the Working Families Tax Credit since it was enacted in 2008. After a decade of failed attempts, a joint effort of companion bills sponsored by Nguyen and Rep. My-Linh Thai (D-Bellevue), gave funding to the mandate. This legislation was one of the Asian Pacific Islander Coalition top priorities for this year’s API Legislative week.

“For a long time, Asian leaders have been in the community doing great work, but they haven’t been amplified and uplifted,” Nguyen said.

Nguyen, the son of refugees from Vietnam, grew up in White Center which has a strong immigrant and Vietamese community. Though a 20 minute drive north, Nguyen describes Chinatown International District as “one of those places in Seattle where you feel like you belong.”

Throughout the pandemic, Chinatown International District (CID) has relied on a culture of mutual aid to keep the neighborhood afloat. Nguyen identified economic opportunity as a key issue he would like to address as King County Executive.

Nguyen remembers translating documents for his mother, a refugee from Vietnam, at six or seven years old. Sometimes these documents were a simple field trip permission slip or as consequential as a means to accessing financial benefits. Nguyen sees similar barriers in accessing COVID relief for restaurants in the CID.

Similarly, the Seattle Chinatown-International District Preservation and Development Authority (SCIDpda) sends emails in English, Chinese, and Vietamese to over 300 businesses to inform them of the changing guidelines.

Nguyen notes he would also like to continue the work of the CID community watch by adding full time employees to their volunteers. He says armed police are not necessarily a part of his vision of safety, but he suggests unarmed law enforcement in street clothes to partner with community groups like CID community watch.

“You should lead from within the community,” Nguyen said. “Not just make top down decisions.”

Nguyen represents the 34th legislative district which includes White Center, where he grew up. As part of the county’s pandemic response, it opened a COVID relief center in White Center. According to Nguyen, he was informed of this decision 10 minutes before it was announced via press conference to the public.

“You should probably make a couple phone calls,” Nguyen said of the county’s decision. “There’s already mistrust and if you don’t tell them, there’s going to be problems, even if I agree.”

If Nguyen wants to bring his philosophy of leading from within to the highest office in the county, he’ll have to unseat Constantine first.

In a four-way primary in 2017, Constantine secured just over three-quarters of the vote. His support grew by over 80,000 votes in the general election against his inexperienced Republican opponent Bill Hirt that year.

Constantine is ahead on funding and endorsements. Nine of Nguyen’s Senate Democrat colleagues have already given early endorsements to Constantine. From the other chamber, 25 House Democrats have endorsed the incumbent  – including Rep. Thai, his partner in the historic victory on the Working Families Tax Credit.

Nguyen says he’s done this before.

In 2018, Nguyen won the open-seat in the 34th legislative district by almost 17% against his better-funded opponent, Shannon Braddock.

Besides, he seems to believe King county is ready for a change.

“As somebody who is the son of refugees, as somebody who grew up in public housing, as somebody who was raised by a single mom after my dad was in a car accident – I don’t think people really care about the politics,” Nguyen said. “They just want to put food on the table, and pay rent, and make sure their children have the opportunity to succeed.”