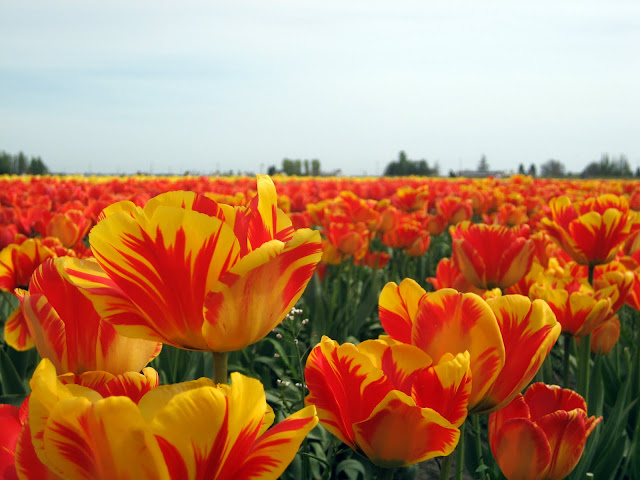 This weekend Jameelah and I went to the tulip festival. Surrounded by peaceful fields of colors, we were able to resist the urge to strangle stupid kids and couples who plucked tulips left and right. For some wacky reasons, there were a lot of Indians and Vietnamese people there. Apparently they really love tulips. Here are some pictures I took with my little digital camera, some using a special feature that lets me isolate one color and make everything else black and white, which allows me to make some pictures look kinda cool, while not having to do much work. Here, check out the pictures at http://picasaweb.google.com/jaggednoodles/TulipFestival2010#

On a different topic, I’ve decided to try my hand at writing an advice column for the published column of Jagged Noodles this week. We don’t have advice columns for Asian people! It’s probably either because we Asians are too shy to seek help in such a public way, or that we’re too busy making potstickers and eating them with soy sauce and hot chili oil while doing calculus. But we all know that Asians have problems just like anyone else (those potstickers can be really sticky, for instance). Today, JN will answer some questions about love that readers have emailed in:

Dear Jagged Noodles: I am an Asian American woman who has never dated an attractive API man. How do I get hot API men to ask me out? I don’t have this problem with men of other races.—Frustrated in Chinatown.

Dear Frustrated: You are looking for the rare Triple A combination: An Attractive, Assertive API. When they do exist, they usually become humor columnists and are taken very quickly. If you don’t want to wait, I suggest you prioritize two of those three A’s. I’d leave out attractive, unless you work on a Korean soap opera set and like men who are prettier than women.

Dear Jagged Noodles: We are an Asian couple, and my girlfriend won’t roll my spring rolls for me. Whenever I go to her parents’ house, her mom always serves her dad. She refuses to do it and tells me to fix my own plate.—Rock’n’NoRolls

Dear Rock’n’No’Rolls: This is the twilight of Asian men’s culturally-sanctioned machochistic behaviors. It is time we contribute equally to the household chores: wash the dishes, take care of the kids, and roll our own spring rolls. I suggest you happily do it, or else be prepared for solitary manipulations of other similarly-shaped objects.

Dear Jagged Noodles: My boyfriend hates PDA. Whenever I try to hold his hand or kiss him in public, he scoffs and says it’s inappropriate. Am I selfish to expect him to show some affection in public once a while and let other people know we’re together?—Lonely at the Mall

Dear Lonely: You are completely wrong, and your advocacy of such vileness and depravity is abominable. I keep small rocks in my pocket to throw at people like you. When you are in public, you sign an unwritten social contract that governs how people are supposed to act toward each other. Being outside your home now involves other people. What if they have strong religious objections? What if they don’t want their children to see you showing affection? Their right to be comfortable in public trumps your desire to have fun. Videotape yourselves making out and post it on the internet instead. Send me the link.

Dear Jagged Noodles: My fiancé keeps texting and hanging out with his ex without me. He says I can’t dictate who his friends are. What should I do?—Too Close for Comfort

Dear TCFC: Babe? Is that you? Look, I told you, she’s just going through a rough time and needs someone to talk to, OK? I’m trying to help her out. Jeeze. I have to write my column. Can we talk about this later? Love you. Can you make me a fajita?

Dear Jagged Noodles: My Vietnamese boyfriend has been called a Communist by my father. How can I tell if he’s really a Communist?—Concerned

Dear Concerned: To find out whether someone is a Commie or not, it’s best to insert references into casual conversation. For example, “Hey, what do you want to do tonight? We can see a movie, eat in, or would you rather incite proletarian revolution?”

That’s all the time we have. Send your questions to [email protected]. Until next time, roll your own spring rolls.