Jameelah and I were walking down a street in Sapa in the dark when we saw several adorable children playing. As we crossed them, a women yelled in English, ”Here, for you: Baby!” and thrust one of the tykes into my chest. The little girl had big round eyes, which were frozen, along with her arms, which were held in surrender positions. The woman and her friends laughed and Jameelah and I looked at the toddler I was holding. She and the other children were so cute that we wanted to take one home. Unfortunately, we had to hand her back to her mom. The poor kid was so stunned that even after I put her on the groud, her arms were stilled raised and she couldn’t move.

Sapa really is an awesome place, actually kind of magical, I’d say. It’s the only place in Vietnam where once a decade or so, it actually snows. Most of the year, the village and surrounding mountains are covered in beautiful layers of clouds. I could spend hours gazing at the mountains, with their constantly changing faces. Here are a few pictures of the town. 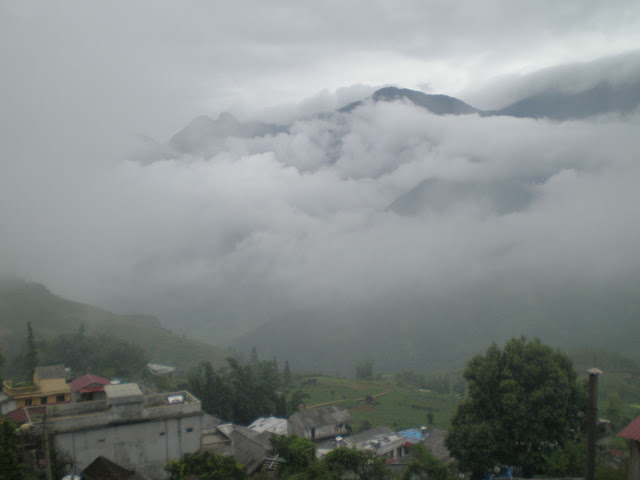 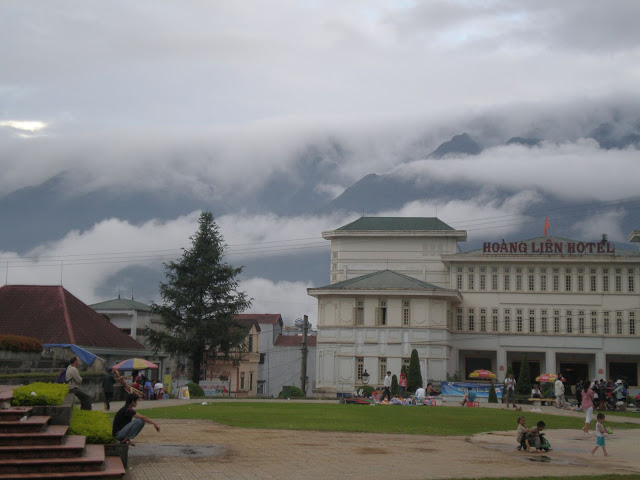 We arrived there after 9 hours on a sleeper train. It’s the best way to travel, as the rocking of the train really knocks you out on your little bunk bed. When we arrived, we were greeted by several ethnic minority girls in colorful clothing. They spoke English in melodic voices and were extremely friendly. “What’s your name? How long you staying? How many brothers and sisters you have?”

We met our tour guide, Ngoc, a cheerful young Hanoian, who, like many Hanoians, reversed his L’s and N’s. “Welcome to Sapatown,” he said, “The people are very lice here. And it’s lot so hot, nike Haloi.” He took us on a walk down a breathtaking winding path to a small village. We stared down, awestruck, by the jade-green terraced rice fields. I thought Dalat was beautiful, but this was just ridiculous. Here’s a picture. 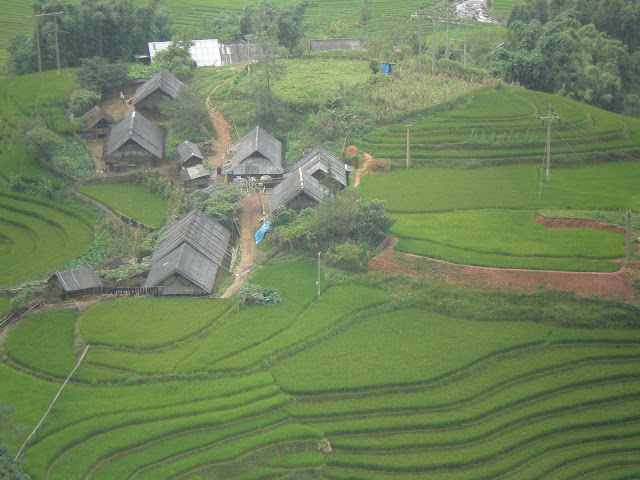 The village children followed us, practicing their English, which they learned solely from tourists. The little village was charming, with welcoming people dressed in colorful clothing, which they made themselves. Ngoc told us about the cultures of the various ethnic tribes here. For example, the love market, a place where once a month the teenagers in the village gather, the boys wooing the girls with bamboo flutes, and the girls flirting by spinning paper umbrellas. Sure beats the internet. They marry very young, at about 16.

When we walked back up to the hotel, it started to rain, and the clouds changed, lowering and rising, thinning and becoming mist-like. At night, at a friend’s recommendation, we went to a little local bar and tried the local liquor, Sapa apple wine. The host brought two tiny shot glasses and a plastic water bottle filled with a golden liquid. We took several shots. Potent stuff, and the endless days in the plastic container probably added tons of chemicals. It was delicious, like apple-flavored turpentine. We couldn’t finish it, so I stored the rest for later.

Looking at the clouds in the background and the kids smiling in the foreground, I thought I could live in Sapa, away from all the craziness of the rest of the world. Jameelah and I could learn to weave, and we’d make make our own wine out of tiny wild apples. When our kids were old enough, we’d send them to the Love market with an umbrella or a flute (and some wine). Alas, we could not extend our stay due to lack of sleeping train tickets, so we bid farewell to Sapa the next day, after another long trek in this magical region of Vietnam.

We woke up from the sleeping train and immediately started the next tour, to Ha Long Bay, this time led by a tour guide named Anh, who was Hanoian also. “On behalf of my company,” he said in the van, “I would nike to say thank you for choosing us. Lao, we travel for 4 hours. Nater, we will stop for short break.”

We drove to Halong with a bunch of Westerners. While Halong is devastatingly beautiful, with thousands of majestic limestone islets dotting the water and perforating the sky, it was ridiculously hot. We were the only Americans on this tour of 16 people. Everyone else was very nice, but the heat made Jameelah and me cranky, as not even Halong’s undeniable beauty could beat the severe humidity and heat. Here’s a picture: 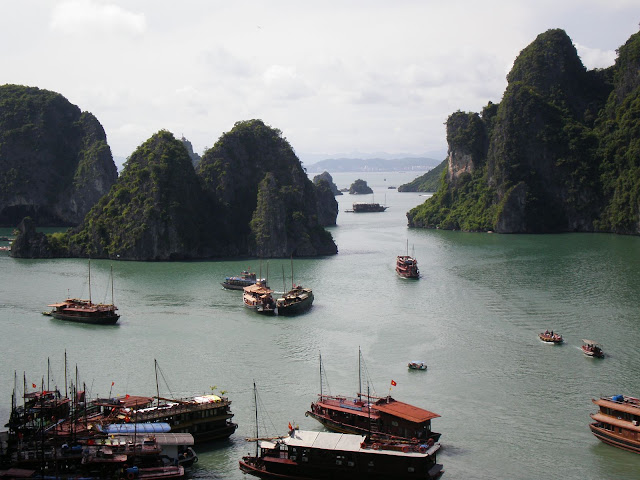 The tour guides were not helpful, leaving everyone to gaze at the amazing islets passing by without any understanding of them. We spent a night on the ship, hot and miserable as hell, and the next morning, the group was led to an island in the bay, where, already soaking wet with sweat and grumpiness, we were urged to climb a mountain for 2 hours. It was steep, wet, and slippery from the previous night’s rain, and several people started verbally abusing the tour guide. Jameelah and I climbed like we had never climbed before, panting and struggling, sticky, dirty, smelly, hot, and ruing not booking the entire week in Sapa. At one point, exhausted, we thought of turning back. But dammit, we continued, and we made it to the top, to the most majestic view of the island. Mountains, greenery, ocean, the sound of monkeys calling in the distance, the works. It was almost worth it. On the way back down, we had another tour guide, a mysterious man in his 40’s, who moved with the grace of the wind, disappearing and reappearing randomly. He was very helpful, quietly leading us down the slippery paths and jagged rocks. At one point, he whispered to me in Vietnamese, “Be careful. There are poisonous snakes here. If you get bitten, you die in 20 minutes. No cure.” Then he said something else about footsteps that I couldn’t understand and then disappeared, leaving me standing there wondering if he had said “Heavy foosteps scare them away” or “Heavy vibrations of the footsteps attract them.”

We made it out of there alive, vowing never ever to climb anything ever again. When we got to the hotel, they put us on a the sixth floor, with no elevators. We nearly broke down weeping on the second floor.

Now we are back in Don Duong, where it is nice and cool, very much like Sapa. I’m breaking out the apple moonshine to celebrate. Here are some more pictures. More will be added later.

7 Tips for Keeping the Romance Alive

The Importance of Insulting a Baby

Adventures of a New Father, Part III: Far Down the Rabbit Hole