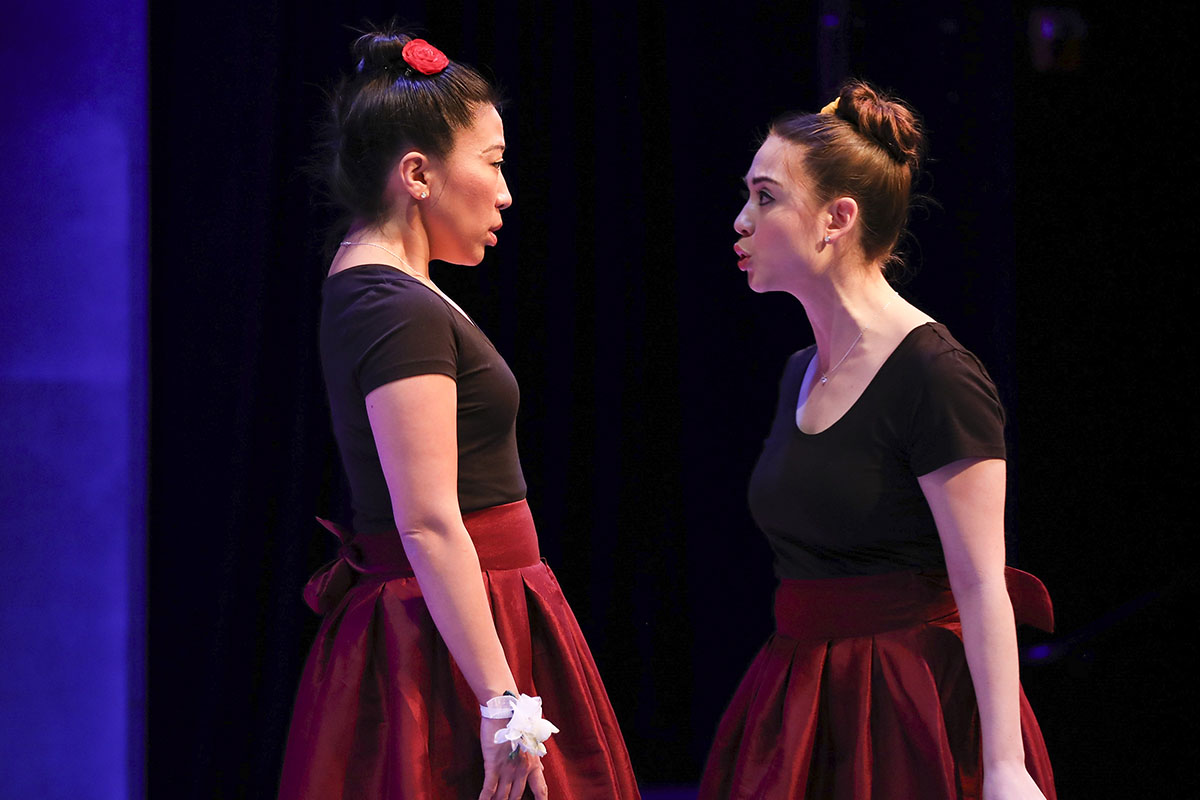 High school can be the stuff of nostalgia, but in the moment, it can also be a vicious environment. Jiehae Park’s play peerless explores this treacherous angle of the quintessential American experience of secondary education, adapting Shakespeare’s Macbeth to illustrate the dark side of the drive to succeed.

To write this play, Park combined her appreciation for Shakespeare with personal experience at a competitive high school. “I do remember absorbing through osmosis the fact that where I went to college was going to be hugely determining for my future, even though I was pretty clueless and haphazard in where I applied,” she said. “I witnessed some of my friends in high school devastated when they didn’t get into what they considered ‘the good Ivies,’ and seeing how personally they took it probably did inform the play.”

Then Park had the opportunity to witness this competition from the outside. “When I was in my early twenties, I did quite a bit of tutoring in New York as my day job, and that was incredibly eye-opening in terms of just how competitive and buttressed by armies of tutors/coaches/consultants, things were getting, at earlier and earlier ages,” she said.

The desperation of parents often led to a blindness that Park finds disturbing. “There’s such a fear of scarcity that pervades these elite college admissions processes, and it can breed a dangerous feeling that there is only room for ‘one of category X,’ whatever that category may be,” Park said. “In survival mode, it becomes dangerously easy to deny the humanity of others.”

In peerless, Park adds the further complication that the play’s protagonists are a pair of Asian American twin sisters, known as M and L – also influenced by her own experience as an Asian American in a white-dominant society. “I’ve lost count of the number of times I’ve been mistaken for another Asian American woman, who to me looks completely different!” she said. “How much more complicated would those questions of race and identity be if there were an actual degree of physical similarity.”

But the concept of twins held even greater fascination for Park. “In the midpoint of my process on peerless, I did some research on these fascinating twins from Wales, June and Jennifer Gibbons, who were born in the early 1960s,” Park said. “June and Jennifer were born in Barbados, and then their family moved to Wales, where they were the only black family in their community.”

This led the Gibbons twins into insularity. “They developed an intense bond, with a deep love, competition and need for each other,” Park said. “When they were teenagers, they went on a wild crime spree and eventually, they were institutionalized.”

This research influenced Park’s adaptation of Macbeth greatly. “I thought a lot about the Gibbons sisters. They loved each other and hated each other with equal fierceness,” she said. “And because the Gibbons girls were the only family of their race and culture in a largely homogenous environment, because they were so outside their community and subjected to racism, they turned inward toward each other with such intensity and such resentment. To the point where their own identities sometimes blurred, by force or by choice.”

This exploration led Park to the questions explored in peerless. “So much of identity is created by how we relate to others and how those others perceive us,” she said, “and if they relate to me and perceive me to be the same as another distinct human, what defines the borders of our individuality?”

Despite the serious questioning, Park has tried to balance her work with comedy and satire. “I’m interested in how laughter can potentially open us up to new things,” she said. “I think it’s incredibly hard to see past our absorbed and often unconscious narratives and avoid a two-dimensional framing of those we encounter briefly. It certainly is for me. But it feels so important to try.”

These efforts make playwriting more than just a job for Park. “I feel very lucky to be making a living at this thing that I would gladly do for free,” she said. “And honestly, negotiating that shift from working for love and play, to suddenly having more practical concerns like finance and career, is probably the hardest part, psychologically, of the last few years, how to preserve a sense of play, so that the creative act doesn’t feel like a dead-fish ‘product’ just because you’re now being paid for it.”

Instead, Park views peerless as a labor of love in multiple ways. “In the end, peerless is a love story,” she said. “A super fucked up love story, in which love of family is constantly being tested against love of, or the idea of, the individual, but a love story nevertheless.”

Park also hopes her audience will leave questioning the systems we’ve created for our children. “It can be easy to see the Other, any Other, as the competition, rather than zooming out and examining the structures that create this competitive scarcity dynamic,” she said. “And when we bake in these value systems from such a young age, without time and space for reflection about those values, what kind of world will result?”