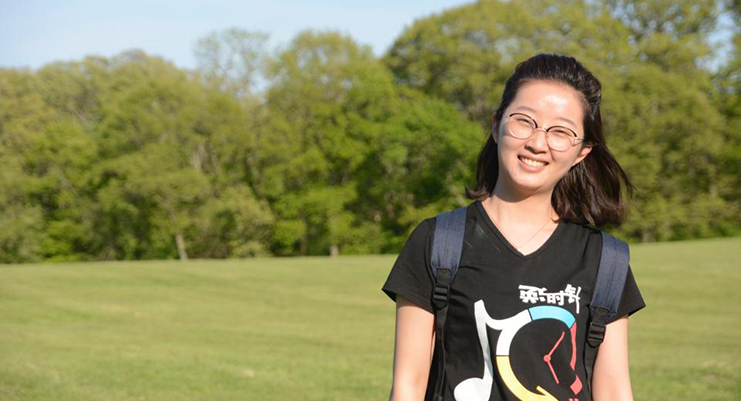 Finding Yingying was released to virtual cinemas on December 11, but this isn’t the world’s first peek at director Jiayan “Jenny” Shi’s documentary work on the search for a 26-year-old Chinese student, Yingying Zhang, who went missing on June 9, 2017, from the University of Illinois at Urbana-Champaign.

Initially, audiences saw the short version of Shi’s documentary work on Yingying Zhang’s disappearance soon after her 10-week class project on the subject was completed in 2017 at the Medill School of Journalism at Northwestern University. “When we think about a case like this, the media is likely to focus on the crime, investigation, or the perpetrator,” Shi said of her inspiration for the film. “I wanted to highlight Yingying as a person.”

Then, while the short film was gaining recognition at festivals, including the 2018 American Documentary Film Festival, Shi persevered with the project. “Yingying’s family’s journey continued,” Shi said, “and I had a sense of responsibility to keep filming because I felt so related to Yingying as I discovered who she was through interviews with her families, friends, and colleagues, as well as her diaries.”

Like Yingying Zhang, Shi had also graduated from Peking University in 2016. “Yingying had been in the U.S. for only six weeks, which reminded me of my own experience when I first got here, balancing my ambition and determination while fighting my loneliness as I tried to overcome language barriers and culture shock,” Shi said. “I worried about her safety as she was new to the country and wasn’t familiar with the environment.”

Shi was prepared to document Zhang’s story after studying the foundation and history of journalism at Peking University, taking a documentary course there, and then coming to the U.S. to study abroad in order to gain more journalistic practice. “I learned how to take initiative in a project and be self-motivated, which is crucial to my career as an independent documentary filmmaker,” Shi said.

It was while Shi was engaged in another documentary project at Northwestern that she first learned about Zhang’s disappearance. “I was really concerned about Yingying’s safety as a fellow international student, so I was following the story closely and spreading the word on my social media,” Shi said. “I reached out to the local volunteer group which connected me to Shilin Sun, a volunteer and senior at the University of Illinois at Urbana-Champaign.”

This connection launched the partnership that ultimately led to Finding Yingying. “Shilin and I came up with the idea of documenting what was going on even though we didn’t know how exactly the footage would be used in the future,” Shi said. “We started to film public events and interviewing international students.”

But when police arrested Brendt Allen Christensen for Zhang’s disappearance, Shi set aside her other class project in order to focus on this case. “I usually spent three days in Chicago when I had class, and went to Champaign for the rest of the week,” she said. “There were many occasions where I heard about an incident happening that very day, so I would grab my camera and take a bus to Champaign right after I finished my class.”

Shi wanted to make sure that Zhang’s humanity was kept in the forefront. “Yingying grew up in a humble family without many resources and was the first person in her family who went to college,” she said. “I knew how difficult it was to get into a university like Peking University, which is like Harvard in the U.S. She had such a great life ahead of her, but everything was suddenly taken away.”

To create a portrait of Zhang, Shi weaved together photos, home videos, and Zhang’s diaries, as well as reflections by family and friends. But she didn’t do it alone: Shi collaborated with producers Brent E. Huffman and Diane Quon, editor John Farbother, along with Shilin Sun as co-producer and cinematographer, to bring Zhang to the screen.

Focusing on Zhang’s life and family brought Shi up close to the power and responsibility that lies in a documentary filmmaker’s hands. “The real challenge was to maintain the relationship with Yingying’s family and navigate their emotional boundary where they were comfortable to be filmed,” Shi said. “Yingying’s family showed their raw emotions and vulnerability in front of the camera, so sometimes I needed to make ethical decisions on whether to continue filming or not when they got really emotional. I always prioritized their feelings over my needs for specific scenes or shots.”

As the court case continued into 2019, Shi had to rebalance her focus on Zhang with details about Christensen’s actions. “Even though the focus of Finding Yingying isn’t the crime, we need to provide the basic information of the case so the audience could understand the full impact of the hardship that the family has gone through,” Shi said. “After several rounds of revisions, we decided not to include any court exhibits of the crime scene and only use a small amount of the secret recordings of the perpetrator, in which he laid out the details of the crime.”

Some of these decisions were the result of audience feedback during early screenings. “Some feedback was totally opposite to my thoughts, so I had a hard time figuring out who I should listen to, and even started to question my own vision,” Shi said. “It’s crucial to trust my own instinct while being open-minded.”

Shi also received notable support from Chicago’s documentary community, including Kartemquin Films. “I was a fellow of the Diverse Voices in Docs program at Kartemquin,” Shi said. “After I graduated, Kartemquin came on board as the co-production partner of the film.”

The feature-length version of Finding Yingying has since been recognized by 23 film festivals around the United States, but Shi hasn’t been distracted from continuing her work as a documentary filmmaker. “As a student journalist, I covered the aftermath of the 2016 election, which drew me into social justice issues regarding people of color,” she said.“I witnessed a fearless and confident undocumented girl stand out to rehabilitate immigrants’ reputations when Trump cracked down on the undocumented immigrant population.”

Finding Yingying is only the beginning for Shi: more recently, she worked at a local newsroom in Chicago and covered stories in Chicago’s Chinatown. “These experiences allowed me to learn about some of the most urgent issues affecting the Chinese community,” she said. “I will continue telling stories about the Chinese American experience with a social justice focus.”

Finding Yingying opened on December 18, 2020 on SIFF’s virtual cinema (go to siff.net for details). The screening included a pre-recorded  Q&A with Steve James and director Jenny Shi. The film received a Special Jury Mention in the “Documentary Feature” category at South by Southwest Film Festival 2020. It is playing virtually at theaters across the country.