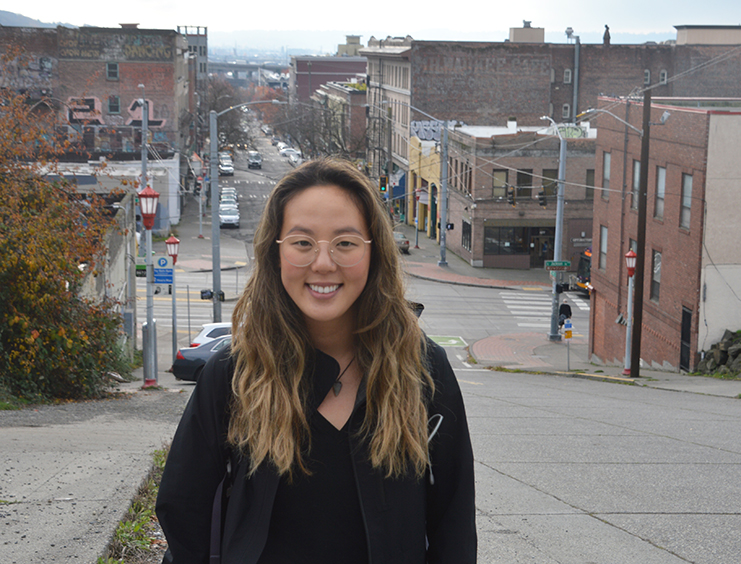 Jessica Kwon approached a lone tent pitched on the rocks under I-5 on a mild day in November. “Outreach!” she called, kneeling beside it and offering snack bars and water to the woman inside. Kwon and the woman chatted; Kwon had previously helped her track down a disability check. After offering to lend the woman her phone, Kwon headed into Little Saigon to find more unhoused people.

Kwon is the Outreach Case Manager for REACH, a program within the nonprofit Evergreen Treatment Services, focusing on the Chinatown International District (CID) neighborhood. Kwon’s position, which she began in August 2019, was funded by the City, contracting with REACH.

Three to five times per week, when she has a couple hours to spare, Kwon stuffs a large backpack full of snacks and water bottles and walks through the neighborhood: Into the parks, under I-5, around the Navigation Center, meeting homeless people where they are, talking with them, and making appointments to help them achieve their goals.

Her time doing outreach is crucial for building trust with unhoused people in the neighborhood.

“A lot of our folks, because of historical trauma, because of how they’re treated in the community, may not have trust,” said Brenda Frazier, REACH Outreach Supervisor and Kwon’s boss.

As a link between unhoused people and services, most of Kwon’s time is spent on appointments helping people achieve their goals. She’ll walk with people to a medical clinic, dentist appointment, or to a shelter they want to stay in. She might accompany them to DSHS to get food stamps, to the DMV to get a driver’s license, or to the Social Security Office to get an ID card (often the first step for getting people into housing).

Keeping an appointment for the doctor, without Kwon there to help, can be hard for people who don’t have a phone to keep time, or if their lives are impacted by substance use, mental health issues or trauma.

Kwon also helps people with the complicated process of getting into shelter. Every shelter has different rules and expectations that may not suit everyone.

Kwon can also refer people who have greater needs — for example, someone with severe mental health problems, addiction or health issues — to more comprehensive case management with REACH.

“This is her area, people know her, she’s able to develop relationships,” said Frazier. “I think that is really important in terms of helping someone move forward, is building that trust and showing up for them, and helping them navigate the system.”

Kwon said helping people navigate the system is the hardest part of her job, and it inevitably involves a lot of waiting, due to the large amount of need and limited resources.

Helping someone achieve a goal might take 30 days, or it might take a few years. “We have to wait and see and we have to follow back and call again,” Kwon said. “And so it’s a lot of unknown and it’s pulling a lot of different strings to make something happen.”

Near the Navigation Center on the outskirts of Little Saigon, Kwon headed toward a make-shift shelter of tarps and tent material set up on a patch of grass. She offered water and snacks — whole grain bars and rice crispy treats — to a woman and a man inside.

Kwon let them know she keeps regular hours at the Chinatown International District library each week, and could help them if they needed help with food stamps, health insurance, mental health care or substance issues. “I need all of that,” the woman said.

By the time Kwon stood up to move on, the man and woman in the shelter thanked her, smiles on their faces.

Everyone Kwon meets has different needs. Sometimes people are just lonely and need company. But most people have a variety of material needs too.

“Housing is always number one,” Kwon said. The first step toward housing is often getting an ID card, which can be a difficult task in itself, as it requires four identifiable documents such as a birth certificate, driving record, high school transcript or social security card.

With the help of people who speak Chinese and Vietnamese, Kwon also does outreach to businesses, letting them know she is a resource, and training them in how to play a positive role. If someone is panhandling outside a business, for example, Kwon can talk to them about other places they can go and where to find resources. And she can teach the business owners how they can de-escalate situations, and ask the person to leave in a respectful way, rather than calling 9-11 and and potentially placing homeless people into “the incarceration system.”

Kwon’s ability to form relationships with homeless residents in the neighborhood, including those who cause problems, has helped improve public safety in the neighborhood, said Sonny Nguyen, who worked as CID Public Safety Coordinator from the spring of 2017 to the end of 2019.

“I’ve seen folks apologize to her and make promises to try and do better, and she’s able to help them figure out what their next steps are,” Nguyen said.

Some community members in the CID, like those of many Seattle neighborhoods, have long expressed concerns about the presence of homeless people in the neighborhood.

Sometimes, this is a concern about the well-being of homeless people in their midst. Nguyen said that the top concern among CID residents in an annual public safety survey — albeit, a survey with a smaller sample size than usual — was concern for the health and safety of unhoused people in the neighborhood.

Other times, people fear that homeless people make the neighborhood less safe. In previous years, CID residents expressed concerns about homeless encampments in the neighborhood and the decision to site the Navigation Center, a low-barrier emergency shelter, in Little Saigon.

“Some businesses feel that the homelessness population is kind of directly impacting their public safety or their business,” said Monisha Singh, Executive Director of the Chinatown-International District Business Improvement Area (CIDBIA). But Singh and former Public Safety Coordinator Nguyen think Kwon has been successful in changing attitudes toward the homeless.

“She is really helping people understand that homelessness alone is not necessarily a public safety concern, that the presence of homeless people does not put us at risk,” Nguyen said.

Still, business owners will sometimes shake their heads skeptically at Kwon or chuckle. Some are frustrated. “I don’t really hear solutions — it’s a lot of concern,” Kwon said of some business owners.

In Kwon’s view, some business owners and community members do not understand homelessness as a symptom of larger things. “It didn’t just come out of the blue, it’s always been here, and it’s continued to grow because these core rooted issues aren’t being addressed,” Kwon said, “which are racism, discrimination and prejudices, and inequality of jobs, finances, income and rent inequality.”

Many CID residents and business owners are immigrants and refugees, Kwon said, and may not trust local government. And she thinks cultural beliefs play a role. “I’m Korean — in Asian culture it’s very stigmatized — mental health, mental illness, substance use,” Kwon said. “The openness to receive help regarding those issues.”

But Kwon enjoys educating people about her work, and how people can play a positive role by contacting her when they have problems.

“It’s really critical to have somebody who is able to be in the neighborhood for an extended period of time, who’s a resource for our businesses,” said Singh of the CIDBIA. “I think from our businesses’ perspectives, a lot of times they see people who are experiencing either homelessness or some sort of crisis, and they don’t quite know what to do.”

Kwon worked in a similar position in the CID and the downtown area for the Metropolitan Improvement District (MID) from September 2017 to April 2018. But after the Human Service Department decided to shift funding priorities related to homelessness outreach, it cut off funding for a person dedicated to the CID.

The CIDBIA and other community advocates were concerned. “We had seen a lot of success in that position,” said former CID Public Safety Coordinator Nguyen, who worked with the CIDBIA to advocate for the position to be restored.

Without someone like Kwon working on homelessness outreach in the CID, Nguyen felt limited in their ability to help homeless people in the neighborhood. If a homeless resident was causing a disturbance in a park, all Nguyen could do was try to intervene in a constructive way, and tell the person where a shelter was. But they had no ability to help them get into one, and limited time for outreach work.

After a string of rejections, Nguyen and others eventually secured some funding from the Mayor’s office, and the rest from the City Council budget, to pay for Kwon’s position, and for similar positions in First Hill and Capitol Hill. The funding lasts through the end of 2020, after which the CIDBIA and others will push for it to be renewed.

Kwon was glad to get to continue her work. She was dismayed when funding for her role disappeared in 2018, knowing the history of how the CID is often de-prioritized by the City of Seattle.

After stopping at her office in Hing Hay Coworks to stuff more snacks and water bottles into her backpack, Kwon headed to the neighborhood parks — Hing Hay, Kobe Terrace, the Donnie Chin International Children’s Park.

The skies were grey, the air mild and not too cold. Having this job, Kwon reflected, makes her feel happier when the weather is nice, and she knows unsheltered people will have an easier time — and the opposite when the weather is bad. Seeing the ways some of her clients live — saving up masses of quarters in a coat, not having access to restrooms — reminds her how difficult people’s lives can be. Kwon thinks more people should go out and meet people where they are — it “humanizes the issue more.”

At Kobe Terrace park, Kwon skipped over a large encampment on the other side of the fence, overlooking the freeway. With safety in mind, she usually doesn’t do outreach at large encampments without some REACH colleagues by her side. While she is trained in de-escalation and assertive harm reduction techniques, her job also forces her to pay attention to how she might be perceived due to her stature, her age, race and gender.

At Kobe Terrace Park, Kwon stopped to speak with people sitting in the park, offering them water, snacks and her business card.

“When I’m outside, the community is my office, and I’m meeting people where they feel most comfortable, in their environment and their home,” Kwon said. “It’s not on the terms of the system, but it’s on their terms.”

Does the CID have a NIMBY attitudes toward the homeless? It’s complicated

Departing as CID Public Safety Coordinator, Sonny Nguyen reflects on over two years on the job