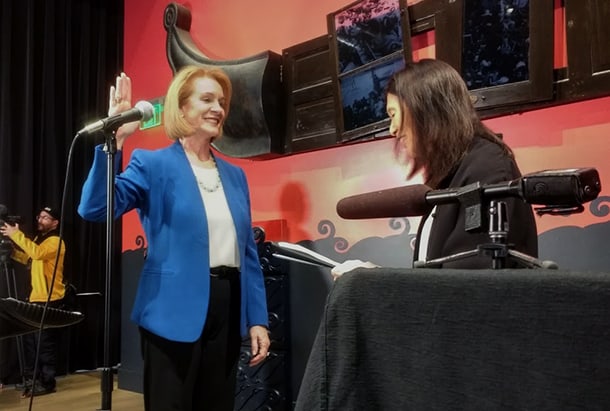 Jenny Durkan was sworn in as Seattle’s first lesbian mayor and first woman mayor in 92 years at a ceremony in the Wing Luke Museum on Tuesday. Previous mayoral swearing-in ceremonies took place at City Hall, but Durkan had five ceremonies throughout the city on Tuesday: In Rainier Valley, West Seattle, Phinney Ridge and Lake City. “I’m breaking with tradition. That surprises you, right?” Durkan said at the Wing Luke. “I wanted to bring City Hall to you.”

In a speech, she promised to uphold a campaign promise she’d made to the neighborhood: “I will not forget Donnie Chin,” she said, to enthusiastic cheers and applause.

Chin, who worked for decades as a caretaker of the neighborhood, responding to thousands of emergencies, was fatally shot in July 2015. His murder remains unsolved. Durkan recalled meeting Chin on a few occasions. “It is amazing that this person knew everybody — their stories, their families, who they were,” she said. One of the first briefings Durkan will receive as mayor will be the Donnie Chin case, she said. “We will keep you informed. We know that that was the loss not just of a person, but of a part of this community, and I will keep it in the forefront.”

The Wing Luke Museum location was carefully chosen. In her speech, Durkan pointed to the museum’s namesake, the late trailblazing Chinese American politician Wing Luke, as an example of how minority communities have fought against racism and discrimination. She noted that Luke, the first Asian American person elected in the Northwest and the first person of color elected to the Seattle City Council, was born in China because his father—who had lived and owned a business in Seattle—was forced out of the country by the Chinese Exclusion Act.

Another example of racial prejudice: The incarceration of thousands of Japanese Americans during WWII, which mostly wiped away that community from Seattle. Ruthann Kurose, a longtime political and social justice activist, administered the oath of office for Durkan. Her mother Aki Kurose was incarcerated in Minidoka concentration camp.

Durkan chose the stop in the CID to sign an executive order reaffirming Seattle’s commitment to its Race and Social Justice Initiative. Earlier in the day at the Ethiopian Community Center in Rainier Valley, she signed an executive order to help low-income people with rental assistance. The CID “stands for race and social justice equity,” she said.

Durkan alluded to Seattle’s status as a sanctuary city, which will not comply with federal orders to arrest and deport undocumented immigrants. “We are a city that welcomes and protects its immigrants and refugees and no one will stop us from doing that,” Durkan said. “And while we are not spoiling for a fight, we will not back down from what is right.”

Over 60 people attended the swearing in, including former Washington Governor Christine Gregoire and Former Seattle City Councilmember David Della (who was appointed a member of Durkan’s 61-person transition team).

City Council President (and mayor-for-five-days) Bruce Harrell, who represents the CID in his District 2, introduced Durkan, joking that it was his swearing-in ceremony. Durkan grabbed him by the shoulders and quipped, “You got your chance.”

Harrell noted that Durkan’s election was “history in the making,” and praised Durkan’s personal qualities of perseverance. “I have no doubt she will be one of the most effective mayors this city will ever know in its history,” Harrell said.

Before the ceremony, Pradeepta Upadhyay, director of InterIm Community Development Association (CDA), said she would like to know Durkan’s plan to prevent displacement in the CID. “Are we making the ID affordable for the really low income seniors and residents of the community that want to continue to live here?” She hopes a Durkan administration can address aspects of displacement that go beyond just affordable housing, something InterIm has already been working on for 48 years.

When Durkan was on the campaign campaign trail, Faye Hong, former owner of the House of Hong restaurant, introduced her to community organizations in the CID to hear their concerns. Before the ceremony, Hong said he hopes Durkan will address public safety and cleanliness in the neighborhood.

“There’s too many homeless people, our families are afraid to come down here,” he said. “We want the mayor to kind of try to keep it safe here.”

Bereket Kiros, board member of Coalition of Immigrants, Refugees and Communities of Color (CIRCC), said displacement and gentrification in Rainier Valley is an issue he hopes to see improve with Durkan in office. “Access to affordable housing, childcare and transportation—my hope is she will do better than her predecessor,” he said. He hoped Durkan will hold true to her promises. “In the campaign…she promised so many things to work with the community,” Kiros said. He hopes Durkan will “listen to the needs of the community and try to act accordingly.”

In her speech, Durkan addressed displacement and gentrification, which have long been existential issues for the CID.

“Our city has grown so rapidly that too many people are being left out,” she said. “Too many people have been pushed out and left behind.”

Durkan quoted the only other female mayor Seattle has ever had: Bertha Knight Landes. Landes would say, “Seattle needed to be made a larger home,” where people feel welcome, Durkan said. “I think we have to bring that back.”