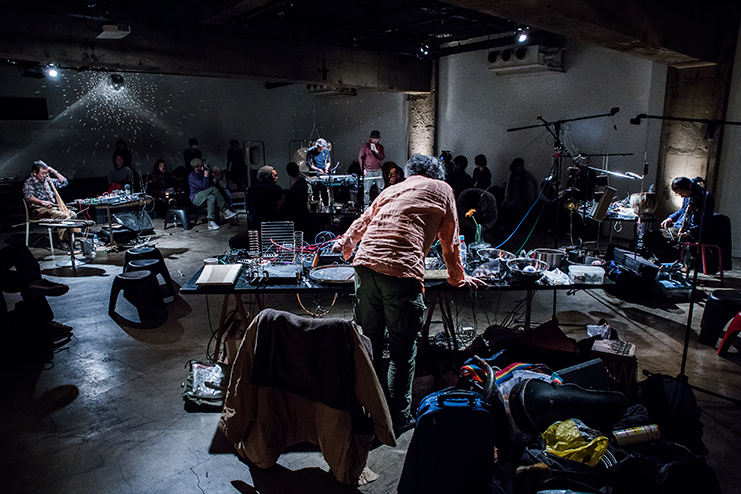 Musical improvisation is coming to On the Boards. Marginal Consort, a collective of sound and visual artists from Japan, meet once a year to create a performance from scratch, and this month, they are sharing their creation in three cities in the Pacific Northwest: Seattle, Portland and Vancouver, Canada.

These annual creative meet-ups have occurred since 1997. “Each time I call up the other members to play together,” said group member Kazuo Imai. “We are more like a collective of soloists, so I am also interested in seeing how each member changes every year.”

The artists of Marginal Consort adhere to a specific structure. “Marginal Consort needs rather a big venue to perform in,” Imai said. “I came up with the idea to place us all in distance from each other when starting Marginal Consort because, from our past experiences back in the 70s, we could start influencing each other when playing close to each other, and I wanted to avoid that in our collective improvisations and just focus on what each can do.”

That doesn’t mean that each artist is completely isolated. “We can also react to the audible sounds,” Imai said, and they have a chance to build on each other’s ideas because each performance is scheduled to last a minimum of three hours.

Each collective member uses different instruments and objects to create sound. “I use stones, pieces of woods, springs, rubber bands and such natural materials. Also kitchenware and things,” Imai said. “I use vibrating motors to let things sound. I also use simple wind and string instruments including a mouthpiece.”

Group member Masami Tada has come to prefer using objects rather than instruments. “I prefer not to use existing instruments, including ethnic ones, and I no longer make any,” Tada said. “That is because the environment each instrument has been made in and its music are deeply related and rooted already in that instrument, and old experts say that musicians can hear the music from the instruments if they listen closely.”

Tada finds meaning in each of the components he discovers. “When taking away all the extra things aside from instruments, what is left there would be the natural materials themselves, and those can be bamboo, old twigs and branches, stones, rubber bands, water, piano wires and such,” Tada said. “We let them encounter with something else, and act and play with our bodies. Perhaps they are too imperfect to be called music, but I feel more of the creativity and possibility, for those appear in the process of bringing out its origin.”

Meanwhile, performer Kei Shii strives to experiment with some musical instruments. “I have been using some self-made instruments like electric guitar and things I designed, and the ones are around us like a cooling fan of a computer, a measure, wire, and small light bulbs,” Shii said. “It seems that many people are curiously checking them out at various places. Perhaps they are wondering how I get such sounds from those things or how I do it.”

In contrast, group member Tomonao Koshikawa is interested in excavating aspects of the past. “I have lots of stuff and instruments that are close to be junk,” Koshikawa said. “I never know what I want to use till the very last moment since that is part of my improvisation. Each has its unique frequency, and that may usually not be heard. There are long histories on ethnic instruments, and when played, they speak in audible voice, I think.”

The members of Marginal Consort believe that their performances are a journey of discovery for their audiences, as well. “Since each show is long, there are people laying down and changing places while enjoying the show,” Shii said.

Koshikawa agreed about the audience’s reaction. “As we continue, there seem to be more of them with empathy.”

Tada elaborated by sharing responses he has heard from various audience members. “They told me that they became aware of air, discovery and spiritual enlightenment of the moment and eternity, and that things not being the continuation of history and something more like a philosophy with a new sensitivity,” he said. “Improvisation can be considered as spiritual enlightenment, and I guess there still will be some people who can see that in 100 years from now, and there is a role for having a place to create the sounds, something like a spirit, that free us from the actual spell of this time.”

The group is very excited to bring their unique work to the Pacific Northwest. “We have played in other countries and once in the States,” Koshikawa said, “and they all have given me good stimulus as I could feel spirits of each place other than the one I get from Japan. That also gives a nice influence to how I play in Japan, too.”

Marginal Consort hopes that the influence will flow in both directions. “Now the timing has come together after all these 20 years with the meaning of Marginal being something like a real periphery or extreme condition,” Tada said. “I am not sure if this improvisation as a prolonged history could be accepted by many people right away. ‘New’ starts as unacceptable in the beginning always.”

Tada hopes to show the audience how to begin their own discoveries. “It is not just an idea, but shows that all the things, visible or invisible, from the present and the past, even the irony of this time, are condensed in it,” he said. “Perfection is imperfect, and imperfection is perfect, and the infinity of the universe is in the moment of your hand. Open your palm and here is another place, too.”

To aid these discoveries, Marginal Consort will offer a workshop in addition to their regular performance. “My workshop is more like a demonstration where each member presents what kind of sound they emit, and also have people experience how they hear differently when they move around while all the members play at the same time,” Imai said. “When people feel that, music appears.”

Marginal Consort will perform on January 25 and 26 at On the Boards, 100 West Roy Street, Seattle.