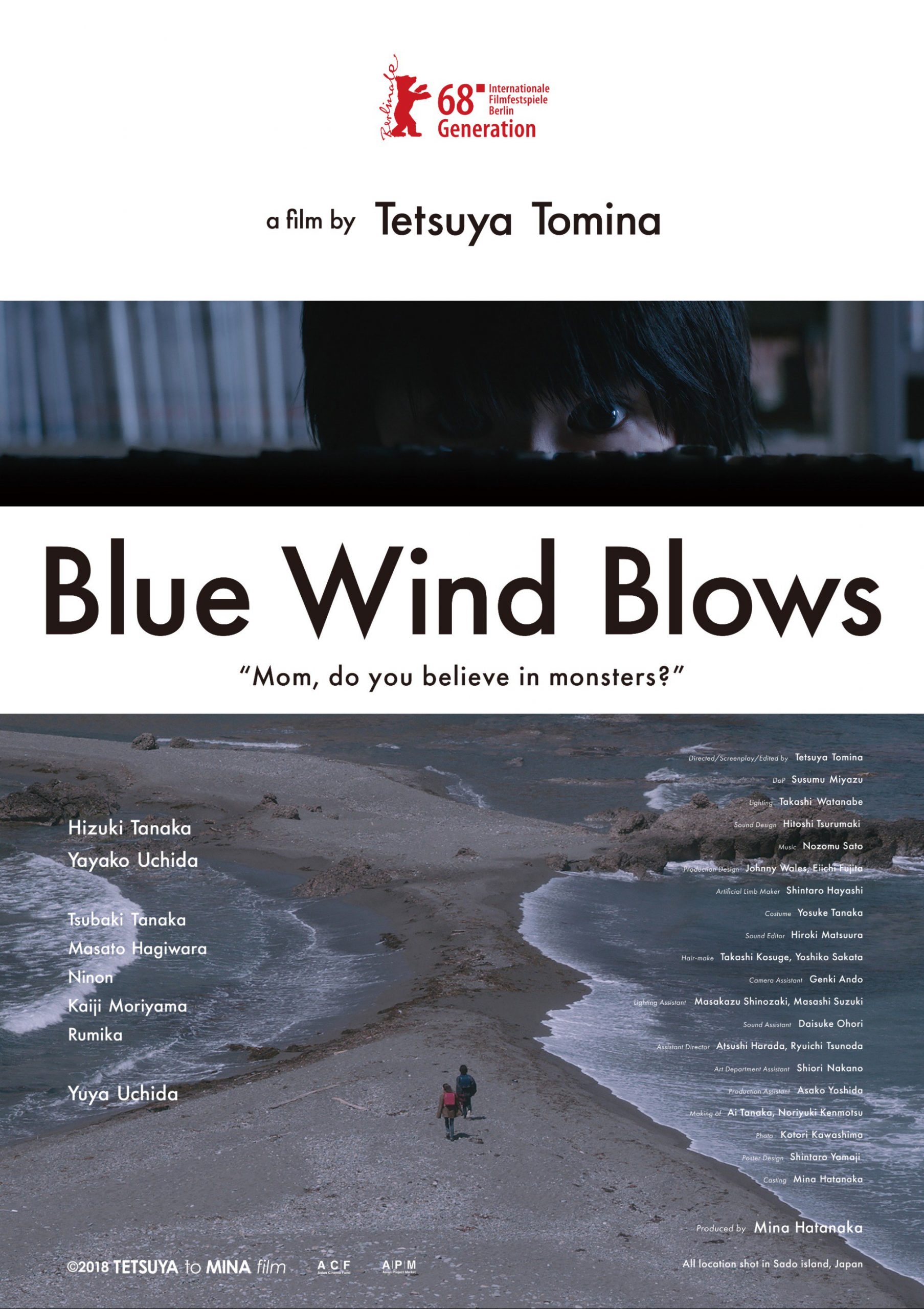 Set on Japan’s Sado Island, a setting chosen by director Tetsuya Tomina for its history and well-preserved provincial way of life, Blue Wind Blows is a poetic vignette on childhood and innocence.

Brother and sister Ao (Hizuki Tanaka) and Kii (Tsubaki Tanaka) live with their mother in a quiet seaside town after the unresolved disappearance of their father. Their mother grapples with the loss in her own quiet way, while the children wonder aloud at night in their shared bedroom where he might have gone. The family’s existence is a quiet and peaceful one, but, like the town they live in, possesses an undercurrent of despair. Sayoko (Ninon), the enigmatic new girl at school who prefers the company of stolen library books and the class pet fish to people, becomes friends with Ao, perhaps sensing in him a kindred lonely spirit.

Light on dialogue (a conscious choice on the director’s part because he casted two non-actors who happened to live on the island as leads), Blue Wind Blows is rich on powerful imagery. Many shots are devoid of people, making the island feel like a ghost town. Color is used to accentuate each character; Ao, for example, wears only deep shades of blue (blue being the literal translation of his name), and his sister bright oranges and red. Mother Midori (Yayako Uchida) favors a neutral wardrobe of gray and black with pops of green (also the literal translation of her name). Moving through the desolate post-industrial town together, the effect is quite striking.

Wide-eyed, shaggy-haired and chubby-cheeked, Ao and Kii are very much the embodiment of the purity of youth. Though Ao is probably just on the cusp of puberty, Blue Wind Blows is not a coming-of-age story, but rather a meditation on or maybe homage to childhood. It’s the sort of film that is difficult to plot against a linear narrative, but that continues to flicker on the edge of conscious thought like a half-forgotten memory long after the credits roll. 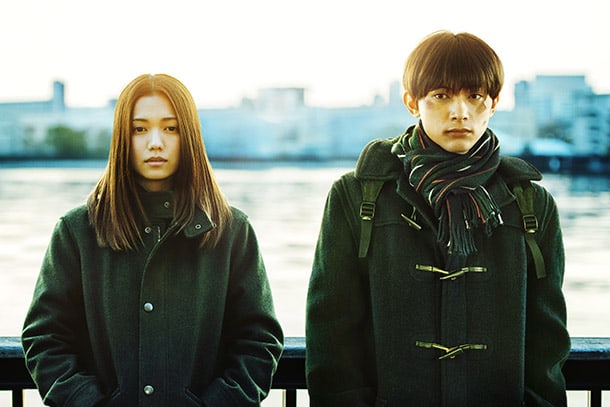 Set against the backdrop of 1994 Tokyo, River’s Edge, which was awarded top prize in the Panorama section of the Berlinale by the FIPRESCI jury, is an unsettling, darkly comedic absurdist tale of youth in revolt.

Following a group of high school students, each somehow a misfit in his or her own way, the film is much less The Breakfast Club as it is Brick. Adults are hardly present; many of the protagonists’ parents are either completely absent or simply overheard offscreen. As such, River’s Edge depicts a lost generation left to their own reckless, hedonist devices. Most of the characters act out, seeking validation for the things they lack. Kannonzaki (Shuhei Uesgugi) is really after love but conflates it with sex; Yamada (Ryo Yoshizawa) has a secret crush on the star player of the boys’ soccer team but pretends to be with a girl in a younger class because it’s more socially acceptable; Rumi (Shiori Do) wants a real relationship but fills the emotional void by having meaningless sexual encounters. Harlan (Fumi Nikaidou) is foregrounded as the most ‘normal’ of the lot but is almost completely dissociated from everything and everyone around her.

Despite being set in the recent past, River’s Edge feels quite modern in its suggestion that there are swaths of lonely individuals living furtively on the fringes of society. Engaging, entertaining, and shocking, it’s difficult to pinpoint any real resolution or redemption for the characters, but perhaps that is the point. 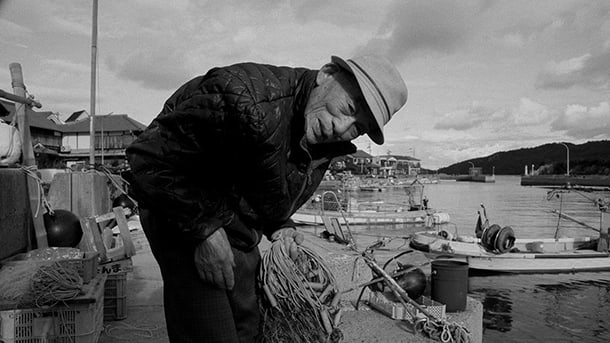 Small-town life in Japan gets a unique treatment in Kazuhiro Soda’s black and white documentary Minatomachi, which tracks the elderly residents of Ushimado in Okayama Prefecture, just one of many places in the country feeling the consequences of an aging population.

Historically a fishing town, Ushimado’s economy has shrunk, both due to declining population but also to modernization. Mr. Murata is an octogenarian fisherman, who still goes out day after day the same way he’s done for decades, dropping his nets into the sea and returning before sunrise to bring them in. (Waiting until morning results in a catch that’s more dead than alive, greatly reducing potential profit). “The tools cost more but fish sell for cheaper,” he says as he repairs a net. Each time the camera accompanies the fisherman on his modest but reliable boat, it can’t help but notice the more modern vessels passing him by.

Mr. Murata and his friend Mrs. Komiyama are the central figures in the film. The townspeople are bemused by the filmmakers’ presence, some clamming up and turning stoic when the camera points at them, others reacting with all the candor one expects from the elderly and then some. One local woman proudly states that she can trace her family back thirteen generations in Ushimado.

Although the local fishing industry features prominently throughout the film, it’s a far cry from Jiro Dreams of Sushi. Soda likes to linger on fish gasping for air and twitching – even after they’ve been packaged for sale. The closeups of wrinkled hands moving with the swift dexterity of an expert, whether it’s repairing a net or butchering a fish, are mesmerizing, and a testament to the craftsmanship and vitality of people like Mr. Murata.

Minatomachi lacks structure, occasionally venturing off on tangents that are never followed up on, but the subjects are compelling enough to make it worth sticking with to the end. It’s a grim reminder of the history, knowledge, and very way of life that will be lost when those left from that generation inevitably pass on. 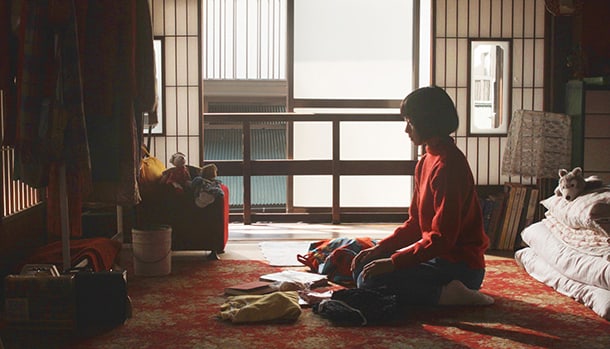 Yui Kiyohara’s debut feature, incidentally also her thesis film for the graduate directing program at Tokyo University of the Arts, is a dreamy, lyrical vignette set in a creaky old house in a seaside town in Japan. Two parallel stories unfold simultaneously, sharing the same setting but without ever quite converging, lending the film an ethereal, otherworldly ambiance.

Fourteen-year old Seri (Nodoka Kawanishi) lives with her single mother Kirkio (Yukiko Yasuno), going through all the typical trials and tribulations of adolescence. She misses her absent father and is wary of her mother’s new boyfriend. Meanwhile, Toko (Mei Fujiwara), a mysterious loner, befriends Sana (Mariwo Osawa), an amnesiac woman on a ferry, taking her home to a place that looks oddly similar to Seri and Kiriko’s.

Kiyohara, who shares screenwriting credit with Noriko Kato, proves adept at depicting relationships – both the tug-of-war nature of the mother-daughter teenage bond and Toko and Sana’s budding friendship. Reminiscent of David Lowery’s A Ghost Story (2017) in its exploration of the interplay between time, place and identity, Our House is a poetic journey that starts out strong but stumbles toward a conclusion that doesn’t quite deliver. Regardless, it’s a promising and respectable first effort for the filmmaker.

The Berlinale’s Forum touted another debut from a first-time, female Japanese director in Yoko Yamanaka’s Amiko. Slightly less polished than Kiyohara’s thesis film, both visually and narratively Amiko crackles with the energy one would expect from its twenty-year old filmmaker.

The titular character, played by Aira Sunohara, is a disillusioned sixteen-year old girl who is as bored of her hometown Nagano as she is tired of her peers, whom she regards as lame conformists. She also nurses a huge crush on the school heartthrob Aomi (Hiroto Oshita), though they’ve really only spoken to each other once, on a winter’s day that Amiko cherishes and constantly comes back to as a hopeful reminder of what her life could be. When news breaks across the school that Aomi has run away, Amiko’s sleuthing reveals that he’s gone to Tokyo to be with a popular girl from the class above them, who epitomizes everything Amiko dislikes about society and their generation. The spunky protagonist sets off to save her crush, but is she already too late?

Through a hodgepodge kaleidoscope of sequences that range from Aomi and Amiko hiking to a scenic viewpoint together, talking about everything and nothing, to Amiko slurping a bowl of spaghetti, to an impromptu dance scene in a Tokyo subway station, Yamanaka’s film captures the inexplicable intensity of adolescent infatuation and the senseless spontaneity of youth. In Amiko we are reminded of what it’s like to feel misunderstood, to be simultaneously enthralled and terrified by the prospect of the future, and spew judgment from a deep, internalized well of insecurity.

Everything about Amiko is slightly messy and rough around the edges, but for a film centered on a renegade teenager, it works. And ultimately, as with Our House, the strong thesis film vibes don’t detract from the director’s nascent talent.