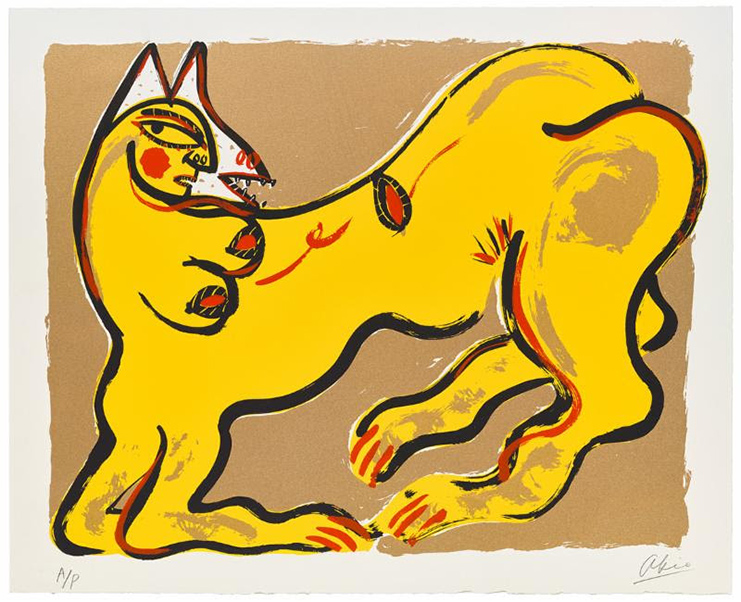 The late artist Akio Takamori had a fascination with the sensuality of the sexes and explored his interest through a series of prints and sculptures. Showcasing prints from Takamori’s beginning pieces to his last print created before his death in 2017, the James Harris Gallery captures the development of 20 years of work in Akio Takamori: To Be Human.

The James Harris Gallery shows Takamori’s work annually to continue his legacy and circulate the remaining artwork and scholarship from the estate. Although Takamori is most widely known for his creation of clay sculptures, galleries tend show a couple of prints with his work. This exhibition houses 11 of Takamori’s prints, along with two porcelain and sand-cast glass figures, making one of the largest display of his prints in a singular showing.

“His [Takamori’s] wife and I went through the prints he had at the estate,” said James Harris, the gallery owner. “We picked ones that told his story and what themes he was trying to explore in his work.”

The earliest piece in the gallery is a pairing of silkscreen prints entitled “Female” and “Male”. Created in 1983, the art depicts a creature of combined human and animal characteristics, the female in yellow and beige and the male in white and red. Takamori uses four legs and a snout to accentuate the primal nature of humans while playing on the inherent sexualization of gender differentiation.

In contrast, the latest piece in the showcase entitled “Fuck” portrays four black and white nude figures, two male and two female. The title and print blatantly display sensuality, using identifiably human bodies contorted to spell out the title. While again drawing on humanity’s carnal desires, the piece also holds a double meaning as Takamori channels his emotions regarding the knowledge of his own death into this work.

“It is beautiful and tragic at the same time,” said Harris.

Takamori also focuses on the theme of children. The gallery displays the “Birth of Bacchus,” a copper plate etching from 2015. Bacchus was the Roman god of agriculture and fertility, sketched by Takamori as a toddler. Humans figures and faces float in black and white observing the baby against a pastel yellow canvas.

Takamori addressed his concentration on children in an interview for the 2016 Contemporary Northwest Art Awards at the Portland Art Museum, saying, “Our world seems so horrible, and the only hope is we are going to have children, and the children carry the future.”

The gallery exhibition portrays the development of Takamori’s prints and lifelong work, focusing on the primal instincts of humanity and how they fit into the cycle of life. Through his art, Takamori persists in commentating on culture and sensuality while his legacy continues to grow.

Akio Takamori: To Be Human, is on view through June 8 at the James Harris Gallery, located at 604 – 2nd Ave. in Seattle.