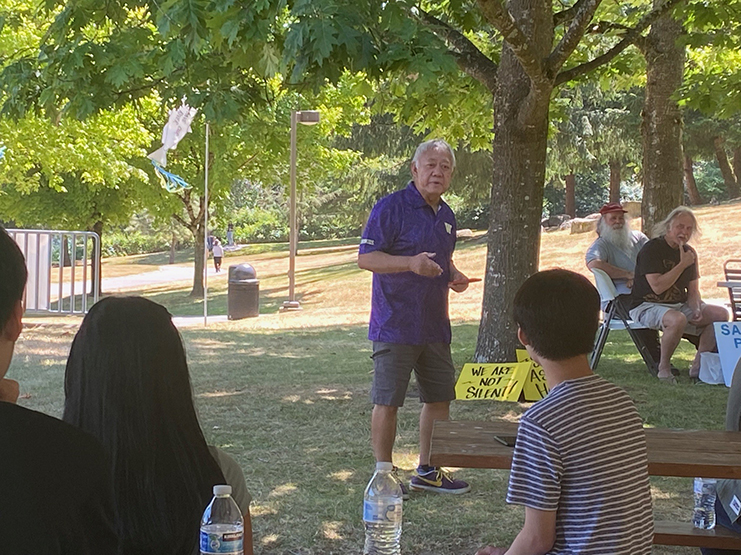 After 35 years as a Newcastle resident, longtime community activist Francisco ‘Frank’ Irigon is seeking a seat on the city council to reorder the priorities of the city’s local government.

Irigon declared his running in the 2021 city council election to replace position 9’s current city council member Tamara Kimmin. Irigon’s colleagues urged him to run, making this his second city council run after a 2011 campaign. Irigon says he is looking to bring the city council to the voice of the people, specifically to ensure that the city’s budget reflects the interests of Newcastle residents.

“I want to bring fiscal responsibility and transparency to the city council, because right now that is not happening,” Irigon said.

Irigon criticized the current city manager Rob Wyman, who has served for almost 11 years, and staff for creating the city budget around their own priorities. The candidate specifically cited a referendum last year during the COVID pandemic that residents largely opposed which called for a 3% utility tax to fund services such as police and fire. The people of Newcastle found the proposal unfair at a time when the COVID-19 pandemic had caused severe job loss and financial struggles.

“We have a city manager and staff that feels they run the city of Newcastle”, Irigon said. “That’s one of the reasons the citizens of Newcastle want new governance. We want to make sure the budget reflects the wishes of the people.”

During a Zoom city meeting last March, Irigon made a passionate comment to the council and police chief Jason Houck, who suggested that the rise in local crime in the last year was the result of a lack of funding to law enforcement, which would have come from the unpopular tax.

“To those city council members who are satirizing my neighbors for voting against the utility tax, we’re going to vote against you in November,” Irigon said to the board.

This is not the first time Irigon has stood up for his neighbors. After migrating with his family from the Philippines as a child, Irigon began a long history of service on a national and local level. He served in the U.S. Army for three years, departing with honorable discharge. He later attended the University of Washington, earning a Bachelor’s and Master’s Degree in social work in 1979. The UW alumnus was heavily involved in protests for campus equity and became the first Filipino American to serve on the Associated Students of UW.

Since then, Irigon has been a longtime activist for issues pertaining to Seattle’s Asian Pacific Islander American populations. The candidate co-founded the International District Health Center as well as Seattle’s first Pan-Asian newspaper Asian Family Affair. In recent years, he has served on boards such as the OCA Asian Pacific American Advocates and Renton Technical College Board of Trustees. In 2017, Irigon was presented with the Martin Luther King Jr, Medal of Distinguished Service for his services to improve the lives of King County residents.

Newcastle’s population of roughly 13,000 is made up of 34% Asian-American residents, making it the third largest Asian population of a Washington city. With the recent uptick in Asian hate crimes around Seattle and the country, Irigon stated that Asian American and Pacific Islander representation in elected offices are essential to meeting the needs of the community.

“Asian representation is very important,” he said. “This is a democracy, and because of that we need to have all our voices heard. That’s what makes America great.”

Irigon is currently running against one other candidate, Newcastle native Paul Charbonneau. Much like his opponent, Charbonneau has vast experience in social work.

“Frank has been a vocal advocate for the AAPI community and I have immense respect for him and all of his work on that front,” Charbonneau said in an email. “We are running for the same council seat, but I hope to work with Frank in the future when all is said and done to engage with our AAPI community and find new ways to bring their voices to the table.”

Irigon stated that his campaign is mostly made up of grassroots efforts, with many volunteers being Newcastle residents and close friends. His campaign manager, Jennifer Harris, is a longtime neighbor of the family.

Irigon has garnered the support of current members Paul Griffin and Dave Mitchell. The campaign has also received support from Asian Pacific American Coalition for Equality (APACE). Irigon is excited to have community support and is confident in his campaign for the upcoming November elections.

“I’ve been prepared for this,” Irigon said. “It’s something I want to do after being involved in Newcastle by other means.”