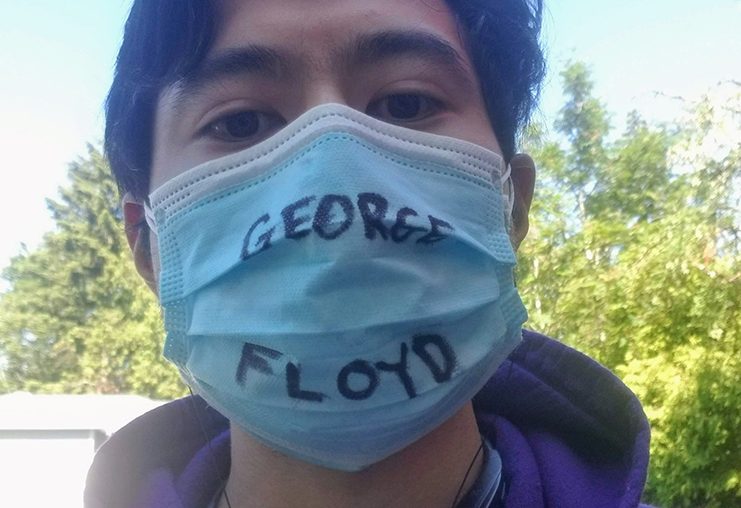 The big headline at the home of Seattle kindergarten teacher, Kert Lin, these days is the recent arrival of his new baby boy, Logan.

“He is the first grand baby for both my family and my wife’s family. So we are very happy and excited,” said Lin.

This new addition, Lin admits, is a bright spot in what had been a surreal time for him and his family. A social media post Lin had posted on a Facebook page earlier this month, describing him being targeted with racial slurs outside a Home Depot in SODO, drew national attention. It also brought on a personal apology from Seattle Police Chief, Carmen Best. But for Lin, this is just part of a much bigger problem in the country when it comes to injustices against people of color.

“It has become a vicious cycle, and it’s not okay,” said Lin who sent the International Examiner a picture of himself wearing a mask with the name “George Floyd” written on it. “To be honest, when I first saw Floyd’s story on the news, I was like, wait is this new? Or is this a case that happened before? It has all become a blur.”

George Floyd was the Minneapolis man who died Memorial Day weekend after a cell phone video emerged showing him being held down by the neck by a police officer, while pleading for his life. Floyd’s family and the Mayor of Minneapolis are now calling for criminal charges against the four Minneapolis police officers involved. All have since been fired.

“Seeing this case, it made me realize that I was actually privileged,” said Lin. “In my case, I was able to call police and report the case without fearing for my safety. I was able to press the officer who responded about the department’s policies in dealing with racist attacks. People like George Floyd can’t necessarily do that, and to me that’s heartbreaking.”

The Office of Police Accountability is investigating Lin’s complaint that on May 12, a driver in another vehicle in the SODO’s Home Deport parking shouted a racial slur at Lin and told him to go back to China. Lin called 911 and the responding officer, according to Lin, told him no laws were broken and the other driver was practicing his first amendment rights. Lin said the officer went on to say there is no protocol in place at SPD to deal with verbal racial harassment, and no reports were taken at the time.

This incident happened as the FBI warned of a surge of hate crimes targeting Asian Americans across the U.S. linked to the COVID-19 pandemic. SPD said it has received six reports of bias incidents against Asian Americans since March 10. In her social media message to the community earlier this year, Seattle Police Chief Carmen Best said in part, “Report hate, including racist name calling, to 911. We are here to help, and will respond to investigate.”

Lin said even though he has received a call from Chief Best apologizing for the incident, he wants to see more done to make sure all law enforcement officers are held accountable and the public deserves more than just hollow promises from the department.

“It’s about understanding what the role of the civil servant is, understanding that you are here for the community and that’s your first priority,” said Lin. “I can’t speak for every police officer out here. I know some wonderful people on the force but the problem is the police culture. They don’t speak out against their own. And that’s wrong.”

One possible outcome of the investigation by the Office of Police Accountability is additional internal training for the officer involved. Lin said he was asked at one point by SPD if he would speak to officers and share his experience. But Lin said he rather sees the department leveraging their own officers of color to help educate each other.

Since Lin’s alleged incident, SPD’s bias crimes unit is investigating a number of other racial attacks against Asian Americans including one on May 16 when surveillance videos show a male suspect shoving a man, who was walking with a woman, and knocking off his glasses and mask. Authorities said the couple was also spat on with the suspect yelling, “It’s all your fault”.

The fear of being attacked for his race is still real for Lin. He said a few days after his son, Logan, was born, he and his wife wanted to run an errand at a home improvement store. But at the last minute, Lin decided he should take his family home first, concerned for their safety.

“I don’t think the pandemic has caused these racist incidents. It just revealed a problem that’s been there all along,” said Lin. “This is a terrible reality and I recognize now that for a limited time, I have this platform to advocate not just for Asian Americans but for all people color. We all need to speak out against this injustice. That’s really the whole point, to shine a light and speak up for your community.”