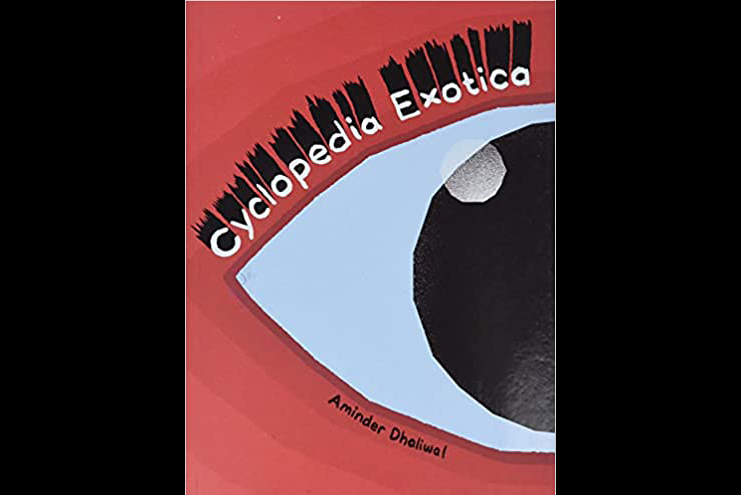 Animator and graphic novelist Aminder Dhaliwal follows up on the success of her first graphic novel Woman World with yet another delightfully intriguing concept for a book: a world where, instead of race and skin color, the defining feature is the number of eyes. Dhaliwal takes a monster from ancient lore, the cyclops, and tries to encapsulate minority experience through their eyes in what is otherwise a world exactly like ours.

Much like Woman World, Dhaliwal started publishing pieces of what would become known as Cyclopedia Exotica through Instagram, which explains why the book is a compilation of short stories about a handful of main characters like a newspaper comic. Published in 2021, Cyclopedia Exotica couldn’t come at a more appropriate time as the rise of xenophobia seems to be accelerating yet again, particularly with the onset of the pandemic, against the AAPI community.

The tone of Cyclopedia Exotica is set with its opening introduction of an encyclopedia entry on cyclopes, where arguably, the most interesting information is their anatomy: male cyclopes have a two-pronged penis while female cyclopes have three vaginas, two uteri and one breast. As soon as it gets to information on Etna, the first cyclops sex symbol, the entry degrades as Etna appears to step out of the page in her nudity and gets straight to the point: “Blegh! What a dull way to learn about a minority…Forget that boring type…Besides, I think there’s a better way to ‘study’ us. Here’s the Cliff’s Notes: 1 eye, 1 breast, 2 vaginas. But also an entire personality and personal history no encyclopedia could ever capture.”

Who are some of these personalities the readers will be privileged to learn more about? There is Pari, an editor on maternity leave who simultaneously struggles with her desire to become a stay-at-home mom with her desire to return to work; Bron, who struggles with his identity, especially after having a botched cosmetic eye job that gave him two eyes but which ineffectually left him with one again when one of the eyes failed; Pol, the “hopeless optimist” who has a hard time finding true love with his unappealing physique, yet often gets fetishized  due to his anatomical feature; Jian and Grae, twin artists who like to explore cyclops issues through their art; and Vy, the woman who helped commercialize the Lift and Separator, a contraption that allowed female cyclopes to painfully distort their single breast to make it appear like there were two.

Cyclopedia Exotica covers a variety of topics that will easily resonate with minorities, and it’s no surprise since many of its stories were based on Dhaliwal’s own experiences growing up in England and Canada: microaggressions, otherization, self-hatred, lack of representation and racism (speciesism?). Within these larger topics, each character has its own journey and storyline that is always compelling but also funny, aching and heartwarming. Through it all, the stories will resonate with all types of readers, perhaps showing them that we are all minorities in some ways – our differences in the end should act as an equalizer and not what divides us.