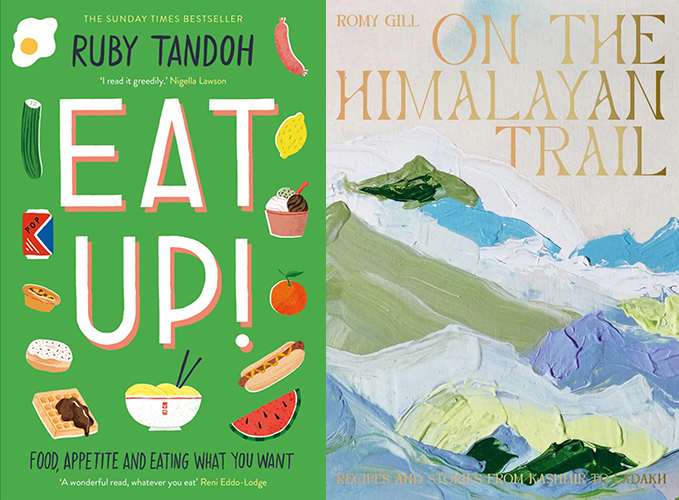 Although there is no shortage of food books in the contemporary American cooking scene, two recent titles stand out, both with a British connection.

On the Himalayan Trail: Recipes and Stories from Kashmir to Ladakh by Romy Gill, Hardie Grant Books, $42.00, 255 pages

British-Indian chef and food writer Romy Gill is well-known for her participation in a BBC cooking series in England. In her current offering, On the Himalayan Trail: Recipes and Stories from Kashmir to Ladakh, she guides us on a land journey, both photographic and culinary, presenting recipes from a lesser-known region of the Indian subcontinent.

In these pages, one can detect influences of centuries-old Mughal, Afghan, and Central Asian cooking, yet the recipes are not totally unfamiliar. Those accustomed to Indian dishes will recognize the Kashmiri versions: Muslim Rogan Josh, Hadiwala Marchwagan Korma (a korma-style meat dish), Dom Oluv (also known as Alu Dom, whole potatoes in spicy red gravy), and halwa (semolina pudding with nuts). Among other dishes, Haakh, a simple spinach preparation, the author’s favorite, is so tasty that it’s often used as an entree. Rice and/or flatbread accompany each entrée.

Gill takes us next to Ladakh, a land where sustainable living is the norm, and the cuisine is heavily influenced by that of Tibet. The severe climate doesn’t allow a wide variety of grains or vegetables to grow. Yet the locals creatively use what is available, preparing such delectables as the ever-popular Momo (filled dumplings); Thukpa (a clear noodle soup with vegetables and/or meat); and Tain Tain (buckwheat pancakes) with Walnut Chutney. Apricots grown in this region are known for their intense flavor. And so, the pudding-like Khubani, made with rehydrated dried apricots sprinkled with sugar, is considered a delicacy.

Ruby Tandoh, a cookbook author, and a runner-up in the Great British Bake-off, is not as widely known in the U.S., although perhaps this book will change that. Eat Up is a collection of food essays, written in a conversational manner, that discusses how we relate to food, the anxiety we feel about our bodies as it concerns food, eating disorders, and the many roles food plays in our personal narratives. “Our memories are patchwork of tastes,” she says.

In a chapter titled, “Digested: Food on Film,” Tandoh says, “(F)ood and film feed into one another in ways we might not expect.” What follows are discussions of such popular films as Chocolat, My Big Fat Greek Wedding, Julie & Julia, and Tampopo.

Although Tandoh doesn’t want us to forget the consequences of overeating, she often reminds us of the joy of food. “I want you to absorb as much of this big, weird world as possible,” she says. “I want you to eat up.”

Bharti Kirchner is the author of eight novels and four cookbooks. Her most recent offering is Murder at Andaman: A Maya Mallick Mystery.