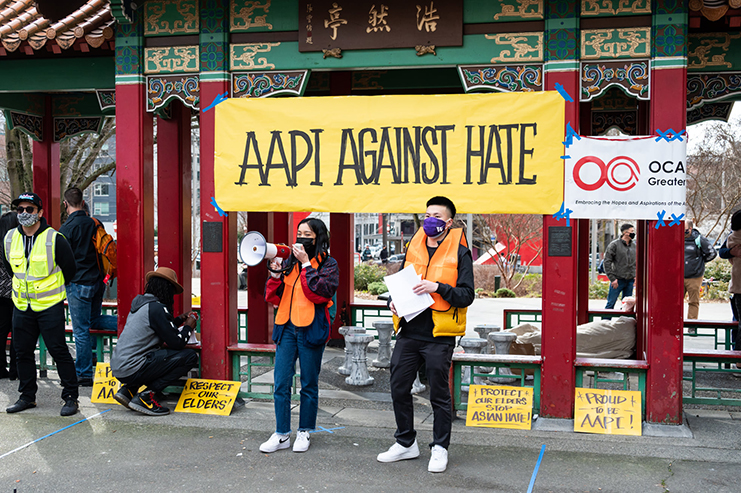 Earlier this year in March, youth coalition AAPI Against Hate led hundreds of people in Hing Hay Park in protest after a series of anti-Asian violence spurred across the country during the pandemic. The rally “We are Not Silent” was not the first protest its young organizers had attended- but for many, but it was their first time holding the megaphone.

The AAPI youth organization led a number of rallies this year to stand in solidarity with the Asian American community. The group first came together in March to organize the Hing Hay Park rally after Japanese-American community member Noriko Nasu was assaulted in the CID a month before. While the perpetrator was later arrested and charged by SPD with two counts of assault, prosecutors did not believe the evidence of a racially-motivated attack was sufficient.

For youth organizer Madeline Magana, the demonization and erasure of Asian-Americans from leaders like former President Trump is what motivated her to join the movement.

“I was questioning the lack of coverage of Asian hate crimes and really frustrated with the political rhetoric around it,” she said. “How can our president’s language be able to instigate such violence across millions of people?”

Students like Nathan Doung and Magana came together under the leadership of longtime community activists Tanya Woo, Frank Irigon and Kim-Khanh Van, who mentored them in  planning in-person rallies and focusing the message of their movement. Both Magana and Doung are both inspired by the past generations of AAPI activism. Irigon, who began his long career in AAPI activism at the University of Washington in the 70’s, saw the same commitment to organizing against anti-Asian violence in their generation as his own.

“There was a difference though, and that was their openness in listening to their elders,” Irigon said. “In my time, there was a saying, ‘Don’t trust anyone over 30’.  These Asian activists are to be respected for not listening to that mantra.”

From that first protest, the momentum of the movement quickly took place.

“For the first two weeks, it was like learning to build an airplane while still trying to fly it,” said youth organizer Duong. “We were all feeling the brunt of it at a really fast pace.”

After the success of the Hing Hay Park rally, the organization started hosting smaller rallies around the Seattle area and spreading their message in their individual communities. Even though these events were significantly smaller, the group always carried their signature black and yellow banner to show the same solidarity at each event.

“We wanted to make it clear that we might be the minority population, but our message is one,” Magana said.

After weeks of organizing rallies up north in Monroe to down south in Rainier Valley while still balancing school, the youth organizers began to experience ‘activism fatigue’.

“It felt like focusing on the movement was the only thing I should do,” Doung said. “But we were all there for each other and gave each other emotional support when we needed it so that we can continue the advocacy.”

While the organization is inactive at the moment, their community efforts are being honored at the IE’s Community Voice Awards this year for their exceptional work in local AAPI leadership. As they transition back into school, the young activists are carrying what they’ve learned into the rest of their careers.

Doung has been working with the organization Viets for Afghans, that mobilizes Vietnamese community members to support Afghan refugees in their shared experience of displacement. Magana, attending Seattle University, is in the process of creating the university’s first Asian Pacific Islander Desi American Student Association.

“For me, it taught me that it’s important for us to work in our communities no matter how small our population is there,” Magana said.