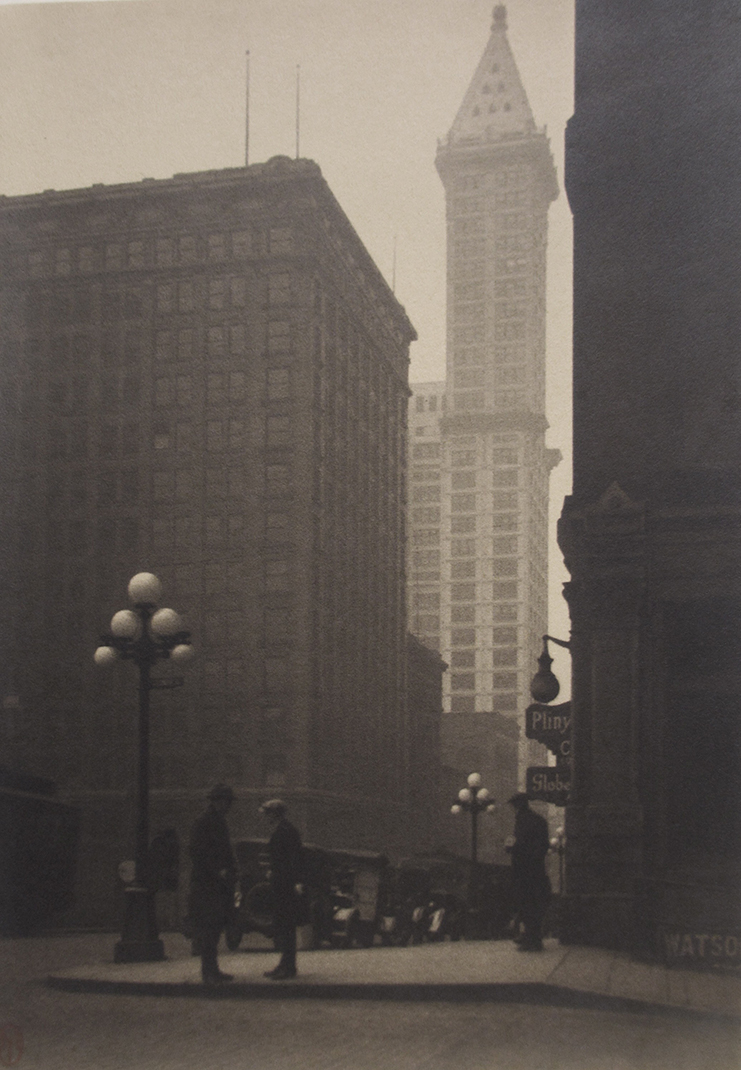 In 1927-28, Seattle Issei Yukio Morinaga was a member of the Seattle Camera Club and the second most exhibited photographer in the world, according to the American Annual of Photography. His distinguished career was cut short when he was sent to Minidoka.

Only 40 of Morinaga’s original silver bromide prints remain, gleaned from local collectors and collections. They are once available for public viewing, thanks to Cascadia Art Museum in Edmonds.

Though Quiet Hour contains several photographs which were published internationally, its local roots are striking. Morinaga came to Seattle in 1907, lived in Seattle’s Nihonmachi, and worked in the Main Drug Store. Several prints come from the private collection of Gene Randall, the son of Virna Haffer; others come from the Washington State Historical Society.

Morinaga’s friendship with Tacoma photographer Virna Haffer sustained him during and through the war; before the war, he was her assistant; after the war, she bought him a house in Tacoma. Haffer’s family looked after Morinaga as he continued his work developing, printing and finishing photographs for Haffer and other commercial studios. In defiance of the United States government who had imprisoned him, Morinaga refused to pay his taxes after the war, and eventually starved himself to death in desperation.

The exhibit includes a brief but heartfelt nod to Morinaga’s imprisonment in Minidoka, including two hand-carved walking sticks by Morinaga and a handmade Christmas card to Haffer. However, its main focus is Morinaga’s artistic work, which does indeed present its own “quiet hour.” Many of the prints are a soft-focus Seattle on industrial workers, downtown streetscapes and alley ways. Luminous sunlight streams through windows of King Street Station, carves out alleyways in Canyon Of Streets, and illuminates the Smith Tower with grandeur. The power of Morinaga’s work, fitting with the Pictorialist tradition, seems to be his ability to frame these urban scenes with a keen attention to shape and shadow. It’s surprising to find a veneer of serenity on these urban surfaces which might be normally associated with noise and chaos.

I spoke with the museum’s curator, David Martin, over e-mail about the exhibit. Our conversation has been edited slightly for length and clarity.

IE (Tamiko Nimura): How did this particular exhibit of Morinaga’s work come to be?

David Martin: I am the main author of  Shadows of a Fleeting World: Pictorial Photography and the Seattle Camera Club  which focused on the mostly Issei photographers active in Seattle in the early 20th century. When I started my research in 1989, I met Gene Randall, son of photographer Virna Haffer who was also a member of the SCC. He had some of Morinaga’s photographs and I thought the quality of his work was extraordinary. [Martin dedicated the exhibit to Randall.]

He told me that “Uncle Mori” was part of his family because Morinaga and his mother met in the 1920’s through the SCC and because he worked for his mother’s photography studio, he was always around the house when he was growing up.  I was able to include several Morinaga’s in my book and the accompanying exhibition at the Henry Art Gallery in 2011 but always wanted to do a solo exhibition of his work since the prints are very rare.

IE: Why bring Morinaga’s work to light now, and why did you select him after Soichi Sunami (out of the other members of the Seattle Camera Club)?

DM: I selected his work because I love it so much and was anxious to show it, knowing that the public would love it as well. I thought his work was sufficiently different from Sunami’s work (they were friends), and it deserves to be shown.

One of my main goals is to keep exhibiting the works of our early NW Japanese artists for the sake of their art and not to victimize them by always stressing the internment, important as it is. These artists had important careers before WWII, both the photographers and the painters and I want to reintegrate their reputations as some of our finest artists.

IE: How do you see Morinaga’s work as fitting into the modernist aesthetic or distinguishing itself from that time period?

DM: His work is very different from other local photographers at that period, mostly because he primarily concentrated on what today we call “Street Photography”, which became popular in the U.S. some 30 years later. The compositions are very modern and atmospheric and he was a master in the darkroom, his prints are superb. He uses compositions that are not just reliant on his Japanese heritage but impart a Western/European aesthetic as well. The photograph of the incense sticks (“Plegaria”) focuses on the abstract designs of the rising smoke as well as framing it with a modern, geometric background. The idea that he titled the photograph with a Spanish title “Plegaria” which means prayer, also shows an interest in other cultures, something today’s artists are interested in. The work was so well known that it was exhibited at the Chicago World’s Fair in 1933.

IE: Do you know more about why the Seattle Camera Club members seemed to prefer the “soft focus” approach, especially to industrial subjects?

DM: They were trying to make the photographs look like paintings or graphic arts like drawings, etchings, etc. This was done by not emphasizing the subject matter literally but imparting an artistic reaction to it. They didn’t want to literally reproduce a subject, that could be done by anyone for the purpose of preserving an image.

DM: Yes. I have plans for doing solo exhibitions by other Issei members of the SCC including Dr. Kyo Koike and Frank Asakichi Kunishige.
I will be doing a book on Kunishige when I do the exhibition because there is enough of his work in existence to do it properly. Unfortunately, there aren’t enough of Morinaga’s works in existence, only around 40 prints that I am aware of. Also, little is known about Morinaga other than what I was told by Gene Randall and what I could find in local collections. The same is not true for Dr. Koike and Kunishige whose archives are deeper.