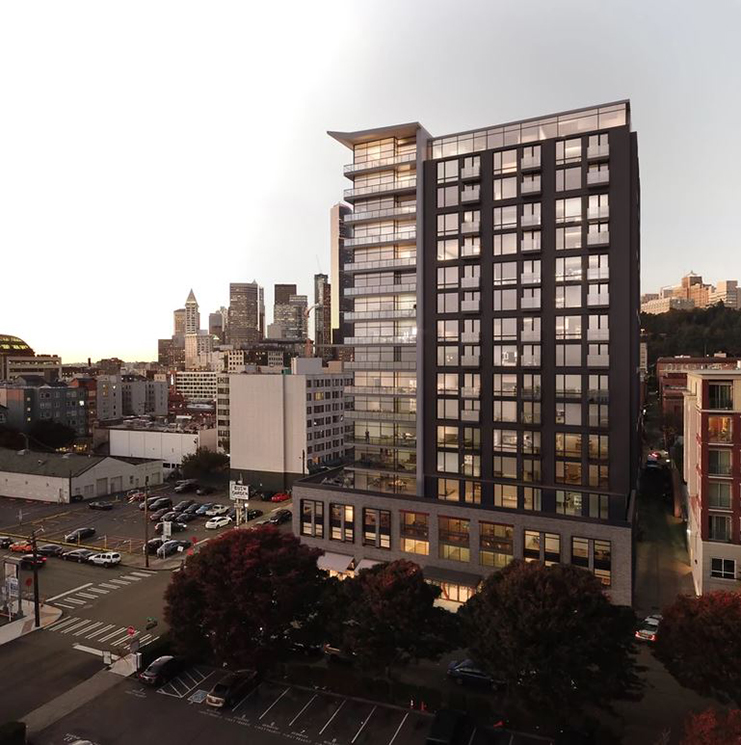 (Editor’s note: This piece has been updated to clarify that ISRD Board members said they have enough information to consider a proposal to demolish the Bush Garden building, but that the board took no action during the August 24 briefing.)

If Vibrant Cities, a developer that owns the building housing Bush Garden bar and restaurant, proposes demolishing the building to create a 17-story project, members of the International Special Review District Board have enough information to review and consider the proposal, board members agreed during a briefing on August 24.

The briefing — the fourth of its kind related to Jasmine — was intended to inform a future complete application for the project. The board did not vote or take formal action.

The last time the Vibrant Cities presented to the ISRD Board in October 2019, representatives suggested preserving the front facade of the Bush Garden building as an aesthetic element, and demolishing the rest of the building. ISRD board members asked for more information about what it would take to preserve the building.

At the time, board members said preserving just the front facade would not meet Secretary of Interior Standards for Rehabilitation, a checklist of criteria for treating historic buildings. The Standards encourage preserving character-defining features of historic buildings when possible. Board members said the plan didn’t adequately honor the building’s history and cultural significance, and preferred to see the building preserved entirely in the project, or demolished. They also asked Vibrant Cities to demonstrate how it would theoretically preserve the building, leaving aside cost.

During the August 24 briefing, Gary Reddick, director of design for Otak, the architectural firm working with Vibrant Cities, said the team wanted to save the building, but after exploring what it would take, concluded it was not financially feasible. “I probably held on longer than others,” he said. “But at some point you just can’t deny reality.”

To rehabilitate the structure could involve demolishing the building, removing the interiors, building a concrete and steel structure inside, numbering each brick and rebuilding the facade from scratch, adding brick ties to the exterior. “The new interior would not be remotely reminiscent of the old building,” said Reddick. To support the foundation would require installing some 120 micro piles.

The brick facade, building interiors, soil-bearing foundation and underground walls are all in poor condition, Reddick said, making it prohibitively costly to rehabilitate. “Yes we could build a replica of that building if costs were no object, but honestly no one would or could.”

Reddick’s presentation also mentioned “lost opportunities” of not developing the site, including adding over 200 homes to the neighborhood, underground public parking, and activating the corner.

Eugenia Woo, director of Preservation Services for Historic Seattle, contested the claim from Vibrant Cities that the building cannot be saved in a letter to the ISRD Board.

“Our extensive experience tells us this building can be saved and rehabilitated,” Woo wrote in the letter, sent before the briefing. “We believe an independent, third-party, structural engineer (with expertise in historic buildings) should assess the building and provide peer review of the applicant’s materials.” Historic Seattle has rehabilitated other historic properties, the letter noted, including the Cadillac Hotel in Pioneer Square, which was damaged by an earthquake.

In a May, 2019 letter to the ISRD Board, Woo also criticized the Jasmine project as out of scale with the historic district, and asserted “the Bush Garden building holds significant cultural and historic values and deserves proper treatment.” The building is a 1910s era historic hotel.

In his presentation, Reddick touted community outreach events attended by Vibrant Cities CEO James Wong, and letters of support signed by over 60 businesses and 600 residents.

Community feedback on the project included a desire for an active community space, honoring the history of Bush Garden, Asian design features, mixed-income housing, affordable retail spaces, and a community benefits agreement, according to Reddick’s presentation.

During the August 24 briefing, Vibrant Cities presented new design ideas for Jasmine, including commemorating the history of Bush Garden through artifact displays. Gary Reddick, director of design for Otak, the architectural firm working with Vibrant Cities on Jasmine, said the building might have community spaces on the ground floor and second floor, including a large venue accommodating over 250 people.

“Our respect for the legacy of the property has grown greatly over these many months and now years,” Reddick concluded. “Let’s embark on this together to build a new chamber of memories.”

During the design phase of the project, the developers want to invite neighborhood and community representatives to help guide design, Reddick said.

Reddick presented schematic renderings of a 17-story building with no preservation of the historic structure, and asked the board if it would support demolition of the Bush Garden building, given the challenges of rehabilitation.

ISRD board chair Matt Fujimoto said this question was out of place to ask the board, which is focused on gathering the information it needs.

Board member Tanya Woo asked for more detailed plans about the feasibility of a community space. Such spaces are often entrances to residences in the building, and can create security, liability and insurance challenges, she said.

Reddick said the developers are committed to the space, including working with the community to plan it. Wong, CEO of Vibrant Cities, said that the community space was added to the design after feedback from the board in the last meeting in 2019. Stephanie Hsie, then ISRD board chair no longer serving on the board, said Vibrant Cities should consider a project that does more to meet community needs. “What are you doing to promote a welcoming, active, equitable, engaging space?” she said.

Responding to this challenge, Wong said the team wanted to create a space for weddings, birthdays and other events in the neighborhood, which lacks such large event spaces. He offered to include the community space as a condition for a certificate of approval. ISRD coordinator Rebecca Frestedt cautioned that legally, it may not be possible for the board to condition its approval on this.

Board member Woo asked the developers whether they had conducted community outreach since 2019, including hearing community input about demolishing the Bush Garden Building, and the size of the proposed project. A large portion of comments the ISRD Board received concerned these issues, she said.

Board member Faye Hong praised the developer for responding to community feedback and plans to honor Bush Garden’s legacy and to build a community space in the building. “I am really impressed by the scope of the project,” he said.

Board member Woo questioned the height of 17 stories and the impact of bringing over 200 new residents into the neighborhood. She asked whether the units will be meant for local workers or tech workers, and the impacts on traffic and public safety.

Reddick defended the choice of 17 stories as legal within the zoning code, and financially necessary.

Board member Matt Chan agreed that the board is bound by the upzones in the neighborhood code that allowed this height.

The second upzone in 2017, part of the Mandatory Housing Affordability program (MHA), was controversial in the neighborhood. Some feared it would be a harbinger of gentrification and displacement.

“Clearly the MHA has a component to it that’s very racist,” said Chan, while adding that developers should not be punished for working within the rules.

Fujimoto pointed out that the building is in a historic area, and the new building would have the challenge of making the large project blend in with the surrounding buildings.

Board members concluded by saying they were ready to move forward with future discussions about how the building could fit into the character of the neighborhood, and would accept a future proposal from Vibrant Cities that included demolishing the building.

The developers should come back with ideas about how the massing of the project can fit into the neighborhood context, said Frestedt.