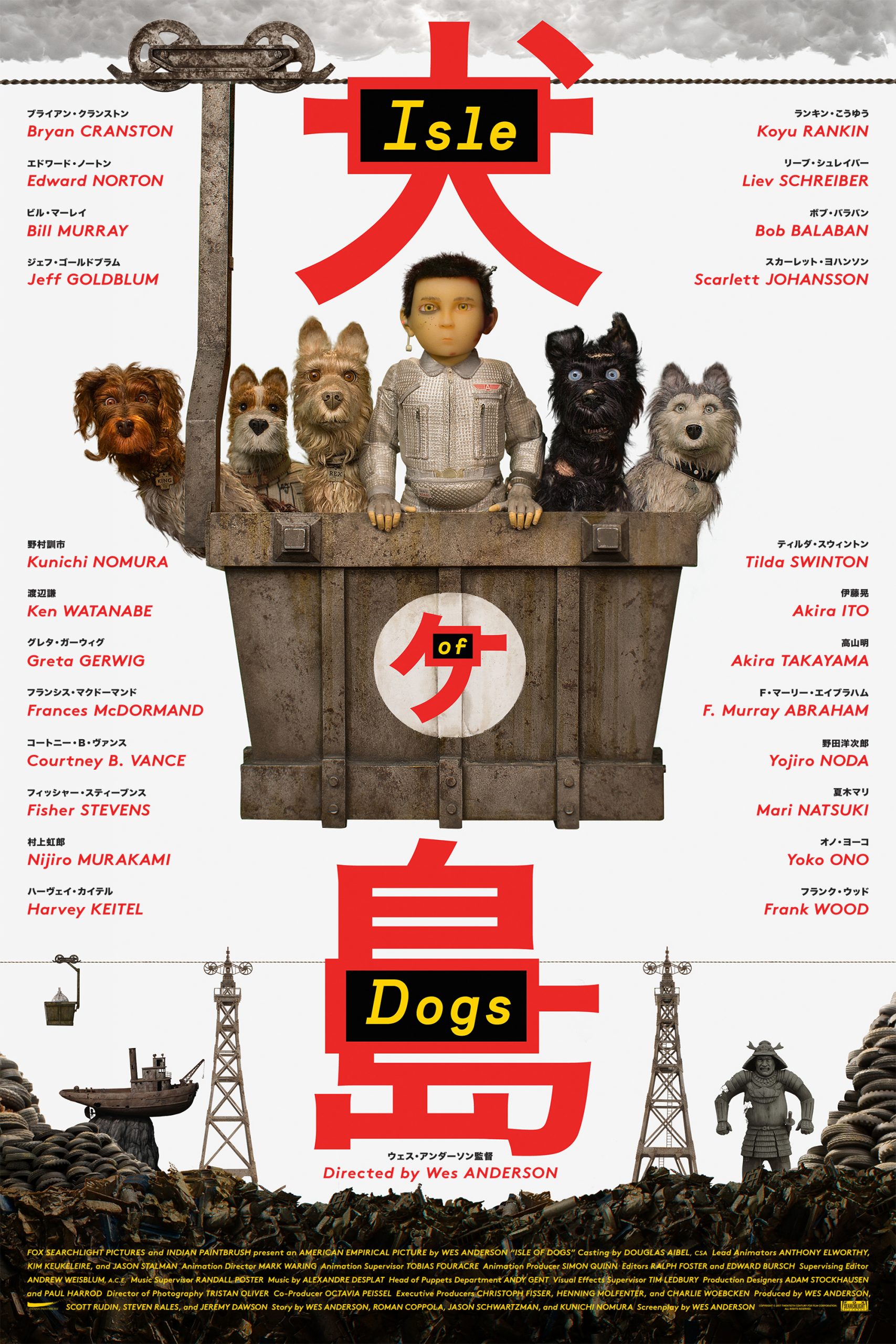 In fictional Megasaki City, a mysterious outbreak of canine flu prompts corrupt Mayor Kobayashi (Kunichi Nomura, who co-wrote the film with Anderson and Roman Coppola) to issue a decree sending all dogs to nearby Trash Island for quarantine purposes. The first to go, by way of making an example, is Spots, guard dog to the mayor’s nephew and ward, Atari.

In typical Anderson fashion, Isle of Dogs conveys universal truths through Atari’s odyssey and coming of age. Just as he’s done previously in Moonrise Kingdom (2012) and, to a lesser extent, The Grand Budapest Hotel (2014), Anderson uses child protagonists to great effect in posing some of life’s biggest questions. In all three films, the young characters are wiser and more astute than the bumbling adults around them; unburdened and uncorrupted by ego and narcissism.

This exploration of the purity of childhood and the bond between boy and beast lend a fable-like quality to the film, bolstered by constant reminders of the ways in which Mayor Kobayashi and his cronies have let Megasaki City fester, as well as man’s powerlessness in the face of nature. Throughout Atari’s journey across Trash Island, he and the dogs come across ruins of Kobayashi industrial attempts, some due to economic decline, others to natural disaster.

“I wouldn’t want to bring a puppy into this world,” says Nutmeg (Scarlett Johansson), a former show dog, as she looks out at the desolate wasteland of Trash Island.

Though the strength of the script is undeniable, the snarky, deadpan dogs are truly brought to life by an incredible arsenal of talent, most of them regular Anderson collaborators. Perhaps adding another allegorical layer to the story, the dogs are the most easily understood characters; most of what the human characters say is translated or transmuted.

The puppet, animation and graphics team prove adept at conveying worlds of emotions without words, from the dogs’ glances and mannerisms to people’s body language, especially those the audience can’t necessarily understand verbally. There are a handful of visceral, graphic moments – even more so than the fingers caught in the sliding door in The Grand Budapest Hotel, which may render the film inappropriate for young viewers. (Although, arguably, due to its thematic elements Isle of Dogs isn’t really a children’s movie anyways).

Despite Isle of Dogs’ many merits, the film’s crowning achievement is its celebration of Japanese culture, drawing influence from traditional art, religion, gastronomy, and music. In an era where positive representation in paramount, it is enthralling to hear taiko as an integral part of a film’s soundtrack, see references to Shinto, and characters who are obviously Japanese but without the offensive slanted eyes and cacophonous accents. Rankin, who is Scottish-Canadian and Japanese (and adorably celebrated his eleventh birthday on the festival’s opening night), executes all of Atari’s lines in Japanese. (It’s unfortunate that the team behind 2016’s heavily Japanese-influenced Kubo and the Two Strings didn’t take the same approach to casting).

Anderson’s attention to detail and commitment to authenticity set the bar high for all filmmakers tackling cultures not their own and elevate an already excellent film to something truly remarkable.