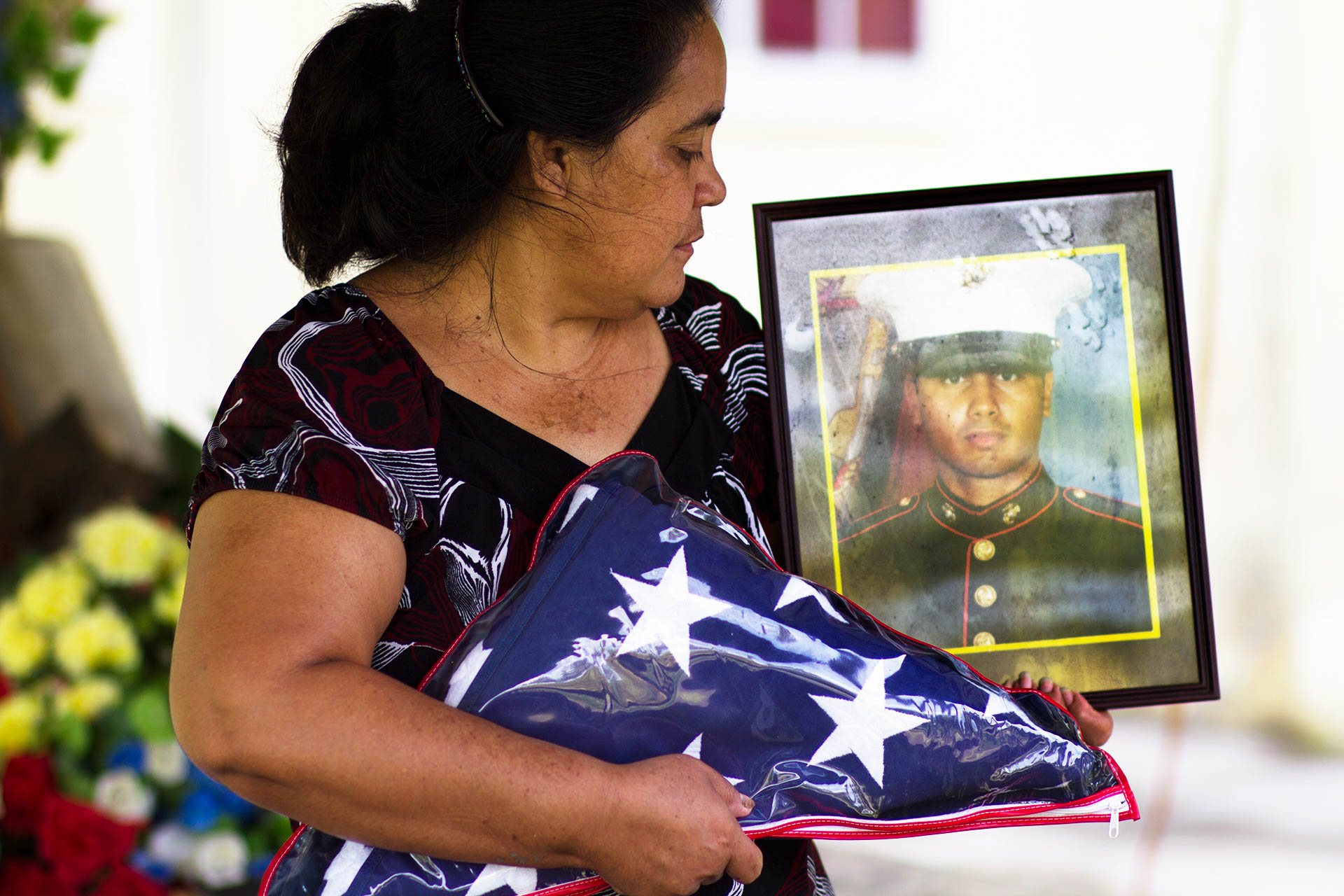 Nathan Fitch’s documentary Island Soldier opens with the homecoming of Sgt. Sapuro Nena, affectionately nicknamed “Sapp” by family and friends. However, the faces and the sober silence of the reunion are unmistakable. This homecoming is a funeral. Island Soldier follows three soldiers and their families. One soldier has just enlisted, one is in the middle of his service, and one is Sgt. Sapp. But first, Fitch sets the stage by introducing us to the Federated States of Micronesia, more specifically Kosrae, an island of lush greens and blues where the Kosrean people have suffered wave after wave of imperialism, first from Europe, then Japan, and now the United States. Although considered an independent country, Micronesia is hamstrung by its relationship to the U.S., which provides aid under the Compact Free Association in exchange for control of the islands and the surrounding waters. What’s more, Micronesia is considered a “recruiters paradise” for the U.S. military, where many young Kosrae who are not American citizens, enlist to fight in our wars.

During a morning service, a minister recites a sober prayer. “Our young people are leaving,” he says. “They are going away for us.” And in the same prayer: “Thank you to the Americans for recognizing our people who are serving in the armed forces.”

The decision to enlist at first seems counter-intuitive. It should go without saying that Kosraean recruits are not uncritical. At a gathering before his deployment, Kilfrank Sigrah, discusses among fellow soldiers who they will be fighting. Not Al Qaeda, they conclude, but other recruits – young men who have nothing, who choose to fight because they have been promised something. On Kosrae, the annual salary is $2,000, compared to a year’s salary in the American military, which starts at $18,000. And there is the promise of opportunity, the promise of education for one’s children. Later, while in Afghanistan, Kilfrank notices the number of islanders who manage to find each other. They seek one another out, pledge to look out for one another, and call each other “brother,” in a way that transcends the brotherhood of other soldiers.

Another young man, Arthur, and his father Madison catch an iridescent tuna while fishing. It’ll be one of the last they catch together before Arthur begins basic training. From the army base, he indulges in a rare talk with his family over a grainy Skype call. Without Arthur at home, Madison takes over all the duties himself, but it’s difficult work. Kosrae depends on the United States for almost 80percent of its budget, and if everyone leaves for other opportunities, the smaller the economy becomes, the more the islands depend on the United States. And with the Compact Free Association ending in 2023, the U.S. has committed to hanging the islands out to dry, while maintaining control over the region. After completing basic, other soldiers clap Arthur on the back and tell him he’s American now, but is he?

Back on the island, Sapp’s mother Maryann has opened a burger stand called Sgt. Sapp’s Corner in memory of her son. The walls are lined with burger ingredients, including Spam. Once a symbol of U.S. military presence and cheap eats, on Kosrae, a can of Spam is $4. Occasionally, Maryann watches old videos of her son from when he was on deployment, Sapp performing a Kosraean war dance in the middle of the desert, Sapp singing and playing the uke. “What do you want to be when you grow up?” he asks in one video, turning the camera onto a soldier in his company. The other soldier answers, “I’m already grown up.” “Oh, shit!” Sapp jokes. With so many young people who do not make it back from war, the Kosraean people are in a constant state of grieving, and without most of the support offered to American veterans, families like Sapp’s must find other ways to stay resilient. Watching the videos, Maryann remarks, “It’s like he’s still alive.”

Island Soldier does not feel like a debut documentary. It successfully packs a lot of information, and a lot of feeling, in a just over ninety minutes, and it’s a compelling indictment of the United States – a country where most of its citizens would fail to find Micronesia on a map, let alone understand how the tendrils of American imperialism might affect it. Fitch tells a crisp and affecting story that does more than move you. Rather, Island Soldier demands outrage, as well as the recognition of a people who have been made strategically invisible, and whose very existence is threatened in the face of American indifference.