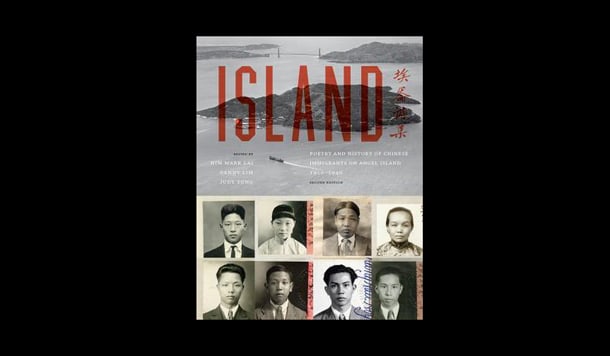 More than two decades ago, the first edition of Island brought the plight of Chinese immigrants in America to the academic forefront through the poetry they left behind at Angel Island. The updated and recently published second edition expands that focus with more poems, interviews, archival photos and an enhanced discussion of historical context.

Despite losing collaborator and eminent scholar Him Mark Lai in 2009 to cancer, editors Genny Lim and Judy Yung have succeeded in compiling a comprehensive and multi-faceted examination of the Chinese immigrant experience in early twentieth century America. With President Barack Obama’s public apology for the Chinese Exclusion Act serving as a catalyst for the issues raised within the book, the release is even more timely given the passing of individuals who were detained on Angel Island and contemporary anti-immigration sentiments.

Eschewing the simple cover of the first edition, the new Island evokes a darker tone with its use of passport photos, reminiscent of mug shots in their austerity, and a black and white shot of the facility that resembles Alcatraz; fitting, as imprisonment is a predominant theme in both the poems and oral history interviews. Echoing the candid tone of the interviewees, whose frankness surprisingly never crosses over into complaint and self-pity, the editors maintain objectivity even in sections pertaining to their own ancestors. The resulting tome is sure to be a touchstone for Chinese and Asian American Studies for generations to come.

Immigrants from the poor southern region of China began flocking to the United States in earnest during the mid-1800s but unlike the Japanese, who were then considered allies, the newcomers were not met with open arms. In order to stem the flow, the Chinese Exclusion Act was passed in 1882, heavily restricting the number and type of visas accessible to the Chinese, but not making immigration impossible. In 1906, the destructive San Francisco earthquake and subsequent fire delivered a silver lining—all birth records were wiped out, opening the door of opportunity for Chinese already living in the Bay Area to falsely claim citizenship. With the government unable to flatly deny all the claims, many took advantage of the situation by declaring more relatives than they had back in their homeland, and selling the identities to other Chinese who became known as paper sons and daughters.

In 1910, Angel Island opened as an immigration facility designed to screen for those who had come to America under false identities and pretenses. While other ethnic minorities were processed within several days of their arrival, the Chinese were scrutinized, interrogated, detained for up to several years, and even deported. Locked up with little to no access to recreational activities, many detainees took to inscribing poetry on the wooden walls of their barracks, though they would not be discovered until many years after Angel Island closed in 1940.

As in the first edition, the English and Chinese versions of over two hundred poems are presented side by side, separated into sections based on topics ranging from the oversea voyage to the nature of westerners. Ample footnotes clarify colloquialisms and cultural tidbits that bolster the poems, as many reference Chinese literature and folk tales, and even readers who are not literate in Cantonese will appreciate the symmetry of the structure, with the same number of characters in each line. With a few exceptions, the authors of these poems remain unknown, yet together they speak to a collective experience touching on issues common to all: the lack of prospects both at home and abroad, the bleak passage of time, the invasive medical exams. The poems also express stark emotions—fear, anger, misery, homesickness, the humiliation of being held captive—as well as dreams of a strong, united China that may someday take vengeance on the United States for the unfair treatment of its children.

The poems offer a sense of what life as a detainee with an uncertain future was like on the island, but the oral history interviews, in often painstaking detail, flesh out the full perspective, including the experiences of individuals who worked at the immigration facility. And, thanks to a de-stigmatization of the practice of using paper identities, many of those interviewed went on the record with their real names for the first time. After arriving on Angel Island, immigrants were subjected to interviews more akin to cross-examinations in detail and scope. Anywhere from 200-1,000 questions could be asked, demanding specificity like which direction village landmarks faced and resulting in transcripts that ran 20-80 pages. Discrepancies in answers between alleged relatives (although genuine family members were known to fail) and friends could result in deportation, necessitating “coaching books” (study guides that were memorized on the month-long voyage to the Bay Area and discarded before disembarking).

Although just under 10 percent of those interviewed at Angel Island were ultimately rejected, the emotional and physical stresses of the environment were severe. Not only were detainees uncertain about how the official interview would go, confinement led to serious and harmful self-reflection that, in some cases, resulted in suicide. In addition to insight regarding the inner workings of the paper son and daughter identity trade, the oral histories offer poignant examples of the camaraderie in the Chinese community, the psychological effects of adopting a new name, and the sad truth that the new life in America was not always better than the old one in China.

The Angel Island Oral History project, spearheaded by Yung, is ambitious and richly detailed enough that perhaps it would have been better to publish separately as a companion volume. But regardless, Island is a gorgeously rendered testament to the thousands of driven individuals whose sweat, blood, and tears helped build the America of today. As our nation continues to be a mecca for impoverished people from other countries, Angel Island reminds us to check our attitudes and policies toward immigration, because for all the benefits of being a multicultural and democratic nation there are myriad untold costs.

Misa Shikuma is the daughter of Tracy Lai, the late Him Mark Lai’s niece.