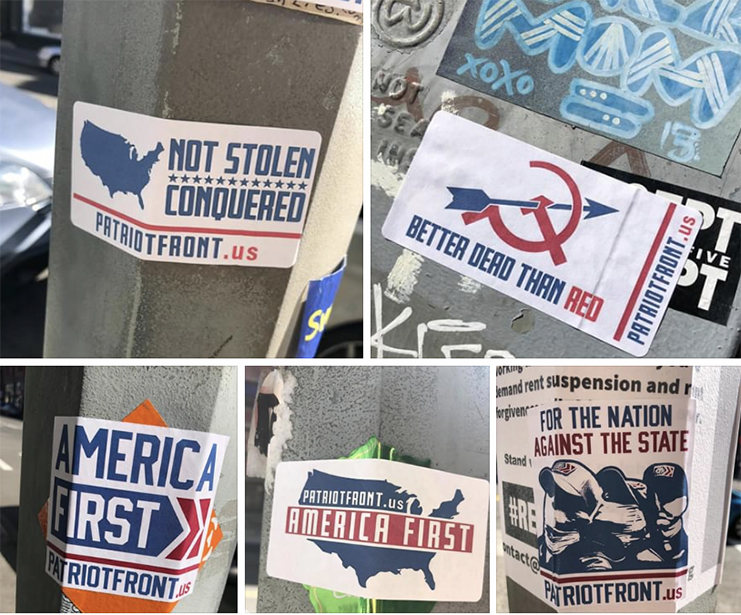 Business owner, Caroline Lee, shared her initial reaction to hearing the news that once again, Seattle’s Chinatown International District had become a target of hate, in light of the spread of the Covid 19 pandemic.

“I am getting concerned,” said Lee. “I am worried that things will get worse and maybe turn violent”.

On the evening of April 12th, Seattle Police said 3 men were seen placing stickers near Asian American businesses in the CID. The men were wearing face coverings and dark sunglasses. The messages on the stickers which included phrases like “Better Dead than Red” and “America First” are known white supremacist propaganda. Detectives said the men are likely associated with “Patriot Front”, a group described by the Anti-Defamation League as “alt-right white supremacist”.

“I am not surprised to hear about this happening in Seattle’s Chinatown,” said Miri Cypers, the regional director of the Pacific Northwest Region of the Anti-Defamation League, or ADL. “There’s been a real rise in bigotry and xenophobia targeting the AAPI community across the country. This pandemic is bringing out a lot of racism”.

Cypers said this though appears to be among the first threatening messages by Patriot Front, specifically targeting the Asian American community in the Pacific Northwest.  According to the ADL, Patriot Front is based out of Texas and was born in the aftermath of the 2016’s deadly alt-right rally in Charlottesville, Virginia.

Cypers said the group has cells across the country and has been active in Western Washington in recent years. Just last spring,  flyers by Patriot Front were found in nearly a dozen communities from Edmonds to Olympia. The ADL has been keeping track of activities by hate groups across the Puget Sound and Cypers said in this latest case in the CID, the location and the timing were pretty implicit.

“It is clear they meant to place these stickers near Asian American businesses, especially Chinese Americans,” said Cypers. “Their flyers and stickers are not outright racist, but the underlying message is. Unfortunately this is adding to the fear among the Asian American community, after recent racist attacks where they are blamed for the spread of Covid 19”.

Eric Chan, owner of Jade Garden Restaurant, posted pictures of the Patriot Front stickers on the Facebook page “Support the CID – Community United.” This social media site was also where Chan shared how his business was recently vandalized and how his family had been targets of bigoted comments. The Patriot Front stickers have since been taken down by members of the community.

Seattle Police told the International Examiner their bias crimes unit is actively investigating the Patriot Front incident and is continuing to pursue reports of hate crimes and other harassment incidents across the city.  They are also doing additional patrols in the CID and urge the community to report any racist attack to 911.

Caroline Lee recently reopened her CID’s bubble tea shop “Young Tea” after closing for two weeks. She said she’s doing so to help take care of her customers and get her employees back to work. Lee said she is taking extra safety precautions.

“I am telling staff to be careful when they are coming in and leaving. We are also closing the shop earlier than we usually do so my workers don’t have to go home late,” said Lee.

But Lee, who is now regularly donating drinks and other products to local healthcare workers, said she wants to focus on the good and people are coming together to spread love, and not hate.

“I don’t want to amplify the fear and the hate,” said Lee. “We should focus on how we can help each other and support each other. We won’t let anything stop us from moving forward and doing great things”.