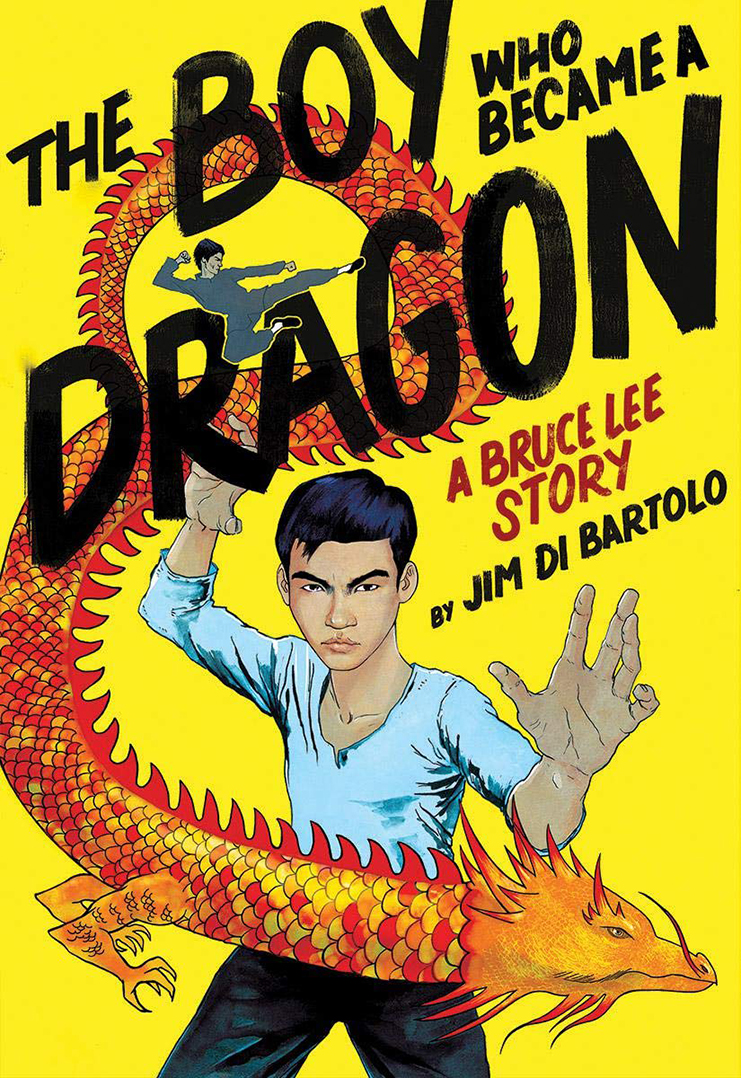 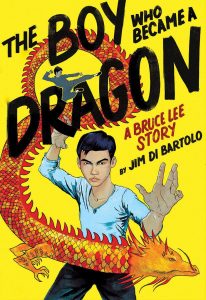 Especially in Seattle, knowledge and admiration for Bruce Lee abound. He is beyond rock star or super hero dimensions. There are many books on him, most recently one by his daughter, Shannon Lee, called Be Water, My Friend. Several were written by him, including Words of the Dragon and Letters of the Dragon.

Jim De Bartolo’s comic book, The Boy Who Became a Dragon, is a labor of love that touches on familiar territory from earlier publications but is aimed specifically for young readers. It begins with an appealing cover design. Young Bruce’s arms are raised and his eyes pierced with determination as he is enveloped by a red yellow dragon. It is a biography of an individual who wanted to be himself and to be his best self as a child and an adult, even as he contends with bullies at almost every stage of life. It is also a history of everyday people as they cope with World War II. Family separations and the loss of homes and jobs — loss of the familiar. They and Bruce find the resilience to respond to the new and unknown.

At a time of great chaos and bullying in American culture and society, young readers can take comfort in and relate to Bruce Lee who was viewed as different but possessed a vivid curiosity and imagination, willing to create his own path, despite the odds and sacrifices. Bartolo subtly shows how Bruce navigated different cultures and expectations of himself, parents, teachers, relatives, friends, allies and adversaries. Young readers can vividly see how Bruce communicates with a range of characters, open to different points of view but holding his own. Youngsters today, too, may see themselves as different, misunderstood, ignored or undervalued.

Hopefully, they absorb Bruce’s lessons of daring to express themselves and choosing how to respond to challenges and adversity. These lessons include reading widely, constantly learning new things, and continual practicing and training to reach one’s goals. Even at his height of success professionally and personally, Bruce encountered challenges. After Shannon’s April 1969 birth he suffered serious nerve damage to his spine and leg.  The prognosis was that his life as a marital artist was over. He disagreed with this. With focused discipline, determination and tenacity over several months he regained all his pre-injury skills.

Bartolo’s writing style reminds me of Shakespeare whose works, written on various levels, could be understood by different audiences from children to adults. Adult fans of Bruce Lee can also enjoy this book. Parents and children might read it together. They are reminded that Bruce Lee’s particular background was as a child of performers and a very expressive performer himself.  Since childhood he was an actor, a dancer, a martial artist, and master teacher. For Bruce Lee, “All the world’s a stage/And all the men and women are merely players.”