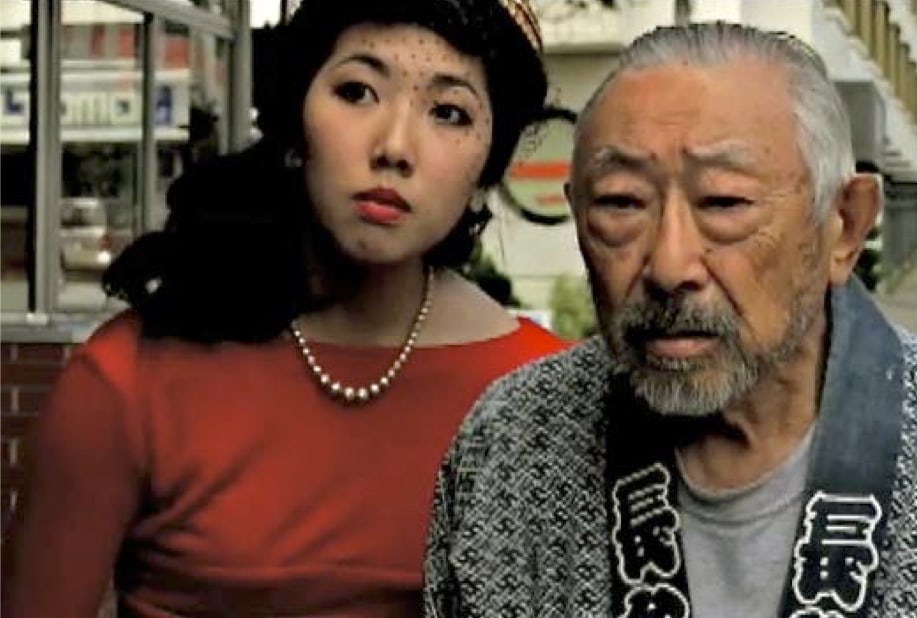 In the streets of San Francisco’s Japantown, the venerated Nisei poet and playwright Hiroshi Kashiwagi is barking out insults at passersby. He is reaching stealthily into a young woman’s purse, then trying out her iPod. He is waving his hand in front of people’s faces.

He’s doing all of this in character, as part of the independent film Infinity and Chashu Ramen. The film is coming to the Seattle area in two different early September screenings.

Kashiwagi stars as the curmudgeonly 600-year old tengu spirit Tenshi, who follows Japanese people as they have migrated abroad. Wendy Woo plays Lucy Yamaguchi, a young bright-eyed woman who has just joined Tenshi in his job of keeping the universe running smoothly.

On September 6, the Bainbridge Island Art Museum, along with the Bainbridge Island Japanese American Community (BIJAC) is hosting the film and a reading by Kashiwagi, starting at 3:00 p.m. On September 7, the Wing Luke Asian Museum is doing the same starting at noon. Ticket information is at www.infinityandchashuramen.com. Both screenings will be preceded by Kashiwagi reading from his work and followed by a Q&A with the predominantly Asian American cast and crew.

“I love being Asian American,” says Kerwin Berk, the film’s Sansei writer and producer. “I love being Japanese American. Our history, our culture, our world perspective … our food … everything that it entails, I love. And it is this kind of love and joy we take in being ourselves that we tried to capture in Infinity and Chashu Ramen.”

I’ve been watching my uncle Hiroshi act for much of my life, but it’s a great delight to see him onscreen. We conducted the following interview over e-mail.

Tamiko Nimura: I wanted to talk about acting with you; so many interviews have focused on your personal experience, and your writing, but not much acting.  I was looking back at “Reading, Writing, and Acting,” from your first memoir Swimming in the American. In that piece you talk about the acting you did as an extra in commercials. Since then you’ve starred in a couple of films: The Virtues of Corned Beef Hash and The Infinity of Chashu Ramen. How has it felt to move from extra to star?

Hiroshi Kashiwagi: Yes, I did work as an extra (also known as background people) because it was available and it was pretty good pay for a few hours of work. But it is mindless, boring work. You look forward to the meal, which is required by the union after so many hours of work or the end of the shoot when you sign out for the pay. You are also required to bring your own clothing for the several changes.  Working as a featured performer in a film is completely different. You are a person or a character involved in the story. It is much more meaningful, even creative.

Nimura: I’m also interested in how you feel about audience interaction now—there’s acting onstage, versus acting onscreen. Have you been able to interact with audience members still, as a film actor?

Kashiwagi:  On stage the interaction with the audience happens while performing.  In fact, the actor needs and depends on the audience response. It not only energizes and enhances the actor’s performance but is a source of much satisfaction. When acting in film, you are acting for the camera so you are not dealing directly with the audience. Only when the film is shown and you happen to be involved in a Q&A is there some interaction. But the camera catches everything so you had better be on your toes.  I like film acting. It’s all in your head and so much is revealed through the eyes. And less is better.

Nimura: Now that you’ve been reading your work in a number of venues, have your readings also felt like a form of performance?  Not as a facade, but as another way of interacting with an audience?

Kashiwagi: For me, reading is another form of performance but the audience response is more subtle. I like to throw in one of my funny poems  just to see if the audience is with me. If there is laughter, I feel confident to continue. I must say, however, that doing anything before an Asian audience is mighty difficult—they are so reserved. It always helps to have some uninhibited Caucasians in the audience who set the tone.

Nimura: Tenshi from Infinity and Chashu Ramen is such a great character—boorish, foul-mouthed, and thieving—completely opposite of the person I’ve known my whole life. Are there individuals or types that you had in mind when you read the script?

Kashiwagi: Tenshi was a bit of a reach for me. I didn’t have anyone or types of people in mind.  I guess I was just following the script as it was written. Actually, it was the language (in Japanese) that drew me to the character. The lines in Japanese were a challenge. I thought I could do them without coaching. But I realize now that to a native Japanese speaker Tenshi must sound “funny.” I should have had some coaching. My rationalization is: Tenshi is a 400 year old ghost—not a contemporary Japanese—so he is free to sound whatever.

Nimura: In a different interview, Kerwin [Berk] has said, “Hiroshi’s character [in Infinity and Chashu Ramen] represents our cultural roots—the part in all Japanese Americans that is Japanese.” What do you think the character represents?

Nimura: What do you hope viewers take away from the film?

Kashiwagi: First, there is San Francisco Japantown as the background; there is interaction of diverse characters; and the use of several different languages.  The viewer might wonder about what’s happening with all the different relationships but by the end it all makes sense.