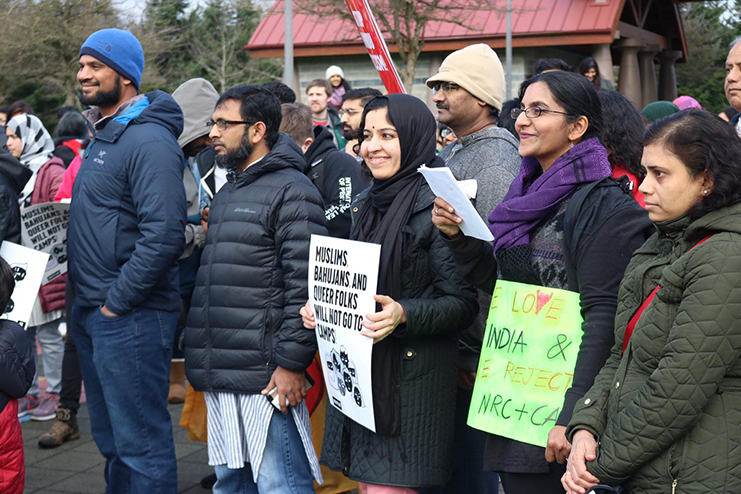 On a rainy day on Jan 19, 2020, people carrying handmade signs and posters trickled into Bellevue’s Crossroads Park pavilion. The crowd was made up of families, students and people of a range of different ages, all hailing from the Eastside, Kent and Seattle. They represented different religions and spoke different languages while eating samosas and drinking hot chai. Soon, there would be over 100 people – standing, singing and chanting together, “Inquilab Zindabad!” (“Long live the revolution!”)

This protest was part of a nationwide action across the U.S. From New York to LA, South Asian groups gathered in an organized effort to protest India’s Citizen Amendment Act (CAA). The CAA was enacted into law in December 2019 amid dangerous protests that occurred across India, in which more than 22 people have died. Under the CAA, undocumented migrants from the “Hindu, Sikh, Buddhist, Jain, Parsi, or Christian community from Afghanistan, Bangladesh, or Pakistan who entered India on or before December 31, 2014,” as listed in the law, would be able to fast track their Indian citizenship. While offering shelter to these communities, the law simultaneously ignores groups not included on this list; for example, Muslims, Rohingyas from Myanmar, Tibetans from China, Tamils from Sri Lanka, while impacting vulnerable communities like Dalits, and queer and trans people.

The main organizers of the protest, Seattle South Asians Building Accountability and Healing (SABAH), assembled a group of speakers to address the crowd before their march to Crossroads Mall. People like Nafisa Muzaffar, a Kashmiri Muslim, shared a statement to show solidarity with those impacted by the law and reminding all of the current occupation of Kashmir. Organizations also shared their statements to show solidarity, including Parisol // Pacific Rim Solidarity Network, Gabriela Sea, and ILPS.

Speaking on behalf of Parisol, Chinese-American activist Clovis Wong explained in an email why it’s important for non-Indian diasporic networks to stand up against what he calls is Hindu fascism.“By collaborating and taking direct political action, we as part of the broader pan-Asian diaspora can send a message to the political establishment that the South Asian and Chinese right wing do not speak on behalf of the whole community,” he said. “We will not be held back by the ‘model minority’ stereotype that silences Asian American political voices.”

A faith-based definition of citizenship is in opposition to the Indian Constitution, which self-describes as a “sovereign socialist secular democratic republic.”  While there is no official link, it is the pairing of the CAA with the National Register of Citizens (NRC) – a proposed procedure to verify documents to determine legal citizens and combat illegal immigration – that creates a situation where hundreds of millions of Indians could potentially lose their citizenship.

To be listed on the NRC, individuals will be required to prove their citizenship with documentation – for example, a birth certificate. The effects of this procedure were observed in the northeastern state of Assam, where the NRC was enacted in a trial that left nearly two million people being excluded from the list. For rural, indigenous, poor families, or migrants, it can be difficult to register births and keep records through generations.

“When you combine it [CAA] with the NRC, that becomes a lethal weapon for existing Muslims,” said Ms. Khan, an Indian American Muslim woman who was at the protest and who did not want to share her first name.

SABAH was intentional in targeting their message to the Indian diaspora on the Eastside, as the region is home to a large population of Indian immigrants. According to Sightline Institute, Bellevue, Redmond, and Sammamish are listed top four Washington cities with the highest population of South Asian Indians.

“Diasporic Indians contribute still to the political system in India,” said Priya Nair of SABAH in an email. “We know money comes from the diaspora to support the fascist projects of the Indian state. This can be seen through the campaign donations made by diasporic Indians to the BJP [the leading right-wing political party in India], rallies and protests conducted by Indians in the United States in support of the Indian government without any acknowledgement of India’s oppression against indigenous peoples, Dalits, Muslims, Sikhs, Jains and many other communities. It is our responsibility to push back on such support for violence and oppression.”

One of these members is Archana Sunil, an Indian-American who created an online petition to reject the resolution. “This resolution makes no difference to the people in Seattle, and makes no difference to anything back home in India,” Sunil says, “There is so much more to it than just across the board saying it’s Anti-Muslim. This has nothing to do with Muslims or non-Muslims; the people who were stuck on the other side of the border during Partition were promised they would get their citizenship back, and that’s all that we’re doing.”

The vote was postponed to Monday, Feb 3, at 1:00 PM. If passed, Seattle City Council would be the first legislative body in the U.S. to state its opposition to the CAA bill through a resolution.

“The importance of Seattle City Council passing this resolution cannot be overstated,” said Sharmin Hossain, political director of Equality Lab, in an email. “When genocidal campaigns begin, one important intervention is international condemnation. This resolution will also be a sign of assurance to the entirety of the South Asian American community that Seattle will continue to welcome the most vulnerable.”