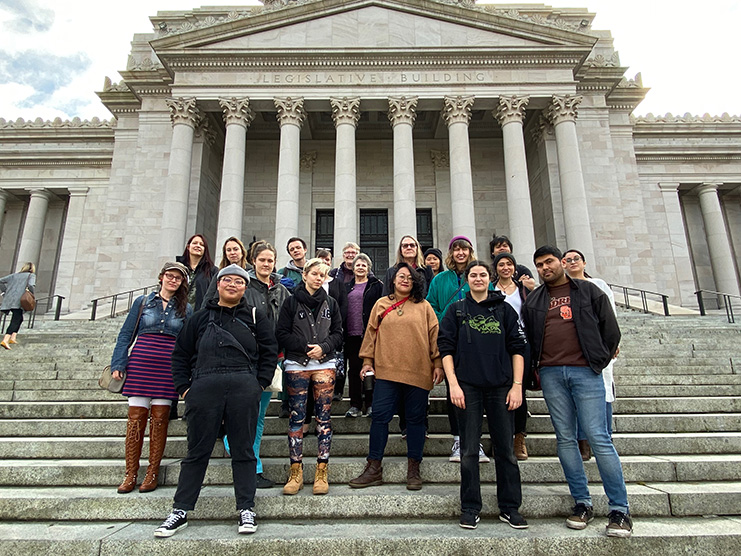 On Tuesday November 5, 2019, almost two dozen members of the Clallam Bay Strike Community Support Group (CBSCSG) showed up at the office of Governor Jay Inslee. The group was there to deliver six demands that include access to healthy food choices, fair wages and access to education for all incarcerated individuals at Clallam Bay Corrections Center (CBCC).

Clallam Bay Corrections Center is located between Port Angeles and Neah Bay on the Olympic Peninsula and can house up to 858 incarcerated individuals, according to its website.

This action is the latest in a series of moves incarcerated community advocates have made on behalf of the CBCC incarcerated population.

Last week, Columbia Legal Services of Seattle filed a lawsuit on behalf of five men who were recently transferred out of Clallam Bay to Washington State Penitentiary in Walla Walla because of their participation in a non-violent food and work strike. The suit claims that they were put in solitary confinement without reason.

The lawsuit also claims that putting them into solitary confinement without justification violated the defendants’ rights to due process, equal protection under state law and guarantee against cruel punishment.

On October 7, almost 90% of incarcerated individuals at CBCC participated in the food and work strike by boycotting the cafeteria during their assigned meal time and not showing up for work. The strike ended on October 11.

Instead, incarcerated individuals accessed meals through other means such as food purchased through their commissary. Normally, disciplinary action is not meted out for not eating in the cafeteria.

“You can choose not to go eat, and there’s no infraction against it. It’s not a write up, it’s not against the rules in any way, shape or form. But they freak out when they see hundreds of people all not going,” said Jordan Bailey, a community advocate for incarcerated individuals and former Clallam Bay inmate. He requested that his real name not be used because he is currently under DOC supervision and fears reprisal.

Plaintiffs claim that the food and work strike was initiated because their grievances weren’t being addressed, and they reached a breaking point. According to the lawsuit, “DOC administrators, aware that the men of CBCC were frustrated with the lack of adequate response to their legitimate concerns, invited a number of CBCC men to a meeting, “ which included, “George Augustine, Kimonti Carter, and Felix Sitthivong… At this meeting, DOC administrators again refused to discuss a number of the men’s legitimate concerns.”

In an email, Washington Department of Corrections (DOC) communications director Janelle Guthrie countered that DOC has taken actions to address those concerns: “The CBCC leadership regularly meets with representatives of the incarcerated population and had already made a number of changes leading up to the meal refusal, including increasing access to phones and dayrooms, making plans to acquire fresh ingredients to prepare lunch boats in-house per the population’s requests, polling the population to determine which other meals the population would like to discontinue, working with the population on replacements and finally, making plans to provide a variety of fruits and vegetables and additional protein sources from vendors outside of Correctional Industries. The incarcerated population received memos on these changes on Oct. 7 and Oct. 9.”

In response to the food and work strike, CBCC administration transferred 36 individuals out of CBCC to other corrections facilities across the state including Washington State Penitentiary in Walla Walla.

According to the lawsuit, “At around 3:00 AM on Wednesday, October 9, each plaintiff was awoken in his cell by a large group of correctional officers bearing tactical weaponry…they were each shackled, hauled out to a waiting bus.”

When asked about this, Guthrie responded over email, “In the months leading up to the meal refusal and work stoppage, the Department  [DOC] received information from multiple sources that groups advocating for the strike would punish with violence individuals who refused to participate,” and in order to, “diffuse the situation and allow for further investigation,” DOC transferred the men out of Clallam Bay and had them put in solitary confinement.

According to the lawsuit, the DOC “have yet to justify their actions… defendants have refused to provide any of the Plaintiffs with any evidence that justifies their placement in solitary confinement,”

“They have failed to provide any evidence to suggest that any of the men that are in IMU [intensive management unit or solitary confinement] and any of our plaintiffs had anything to do with any alleged acts of violence,” said Nick Straley the lead attorney representing the five men. “We’ve seen no evidence that there were any alleged acts of violence or any threats of violence. All of our plaintiffs are adamant that… all the men were encouraging each other to act non-violently.”

He continued, “Getting the men released from solitary [is] the most pressing issue. We also want to make sure that all their property is returned to them in the condition it was when they were transferred and files are scrubbed of any negative information related to this event that might cause them any problems in the future, that attention be paid to the concerns that the men at Clallam Bay have raised. We’re hopeful that the public and the policy-makers pay greater attention to those concerns and reforms are put in place at Clallam Bay and then elsewhere.”

Guthrie noted that the defendants would be moved out of solitary confinement by Thursday November 7th. DOC has until November 19th to fully respond to the lawsuit.

This latest strike follows two others in the last year highlighting the struggle between incarcerated community members and DOC administration.

“[They] used to have regular kitchens and regular foods here in Washington and then CI [Corrections Industries] took over. I never heard complaints about food until CI took over,” said Melody Simle who has had family and friends imprisoned and has been active in advocating for incarcerated community members. She’s also been a member of the Department of Corrections Statewide Family Council and spent six months working in The Office of Corrections Ombuds Office (OCO).

Corrections Industries is the prison labor arm of the DOC. In addition to using prison labor to make and process things like furniture and license plates, it also manufactures food served to all prisons in Washington state.

In the past, prison meals were prepared by incarcerated individuals by prison. Then, in 2013, Corrections Industries took over taking prison food service into a mass production style system akin to a fast food chain.

“What they’re [incarcerated individuals] seeing is food that’s cold, not ripe, overripe, heated to the point where it just dehydrates or turns into mush. Ovens that turn stuff brick hard. They don’t follow the menu. So they’ll tell you a dietician put this menu together, but we often hear that they’re not getting the portion size that it says on the menu,” said Simle.

Bailey added, “Instead of giving us fresh food — say there was a chili made one night and hot dogs served the next night, and macaroni and cheese or pasta salad — they’ll throw the remaining of all these dishes into a big pot and mix it together and put it on your tray and call it the seven-day soup,”

In 2013, Governor Inslee signed an executive order to help provide healthy food accessibility for incarcerated individuals. To date, DOC has yet to live up to the mandate.

While the strikes have primarily centered around healthy food access for incarcerated individuals, this latest protest has grown to include demands for wage increases and access to education and trade skills.

“People of color are not awarded the same opportunity… If [you] are undocumented, even if you’re the best student in your class, you’re not allowed to work in certain areas. You can’t work on the school floor. You’re not even given the opportunity to basic education,” said Bailey.

In the past, DOC has limited access to education and work for those who are undocumented and/or have an order of removal. Bailey claims incarcerated individuals of color are unfairly labeled into “Security Threat Groups” or “STG”  based on their perceived ethnicity by prison administration.

“If you are an Hispanic prisoner, which they like to label STGs, you’re not allowed to work in maintenance because maintenance gives you access to different parts of the prison,” he said.

The cost of goods, such as hygiene products and food purchased through commissary have also gone up 200% in the last 15 years while wages have remained the same.

Bailey also argues that the system in which incarcerated individuals are paid is unfair. “If you’re paid at an hourly rate, [it] should be considered employment, which would entitle you to a fair wage payment, the minimum wage or something close as well as give you the right to file taxes, which none of that is being done. So what they’re doing is giving you pay at a gratuity system base, but they’re taxing you at it as if it was employment. So it’s a double edged sword.”

“The agency will be assessing options to increase wages and may need to make a legislative budget request to fund such an increase,” said DOC communications director Guthrie in an email when asked about incarcerated individuals grievances regarding wage increases.

“It was really moving for me. A lot of mothers came who had children in [prison] 15 to 20 years,” said JM Wong who was one of almost two dozen organizers who delivered the six demands to Governor Inslee.

Wong hopes that personally delivering the demands to the Governor will help get the DOC to come to the table in a public meeting, something that she hopes will help the incarcerated individuals of Clallam Bay.

“We just don’t want this to be forgotten, you know… it just goes under the rug and people forget about that and we just want to keep shining that light,” she said.

Read more about the full list of demands here.