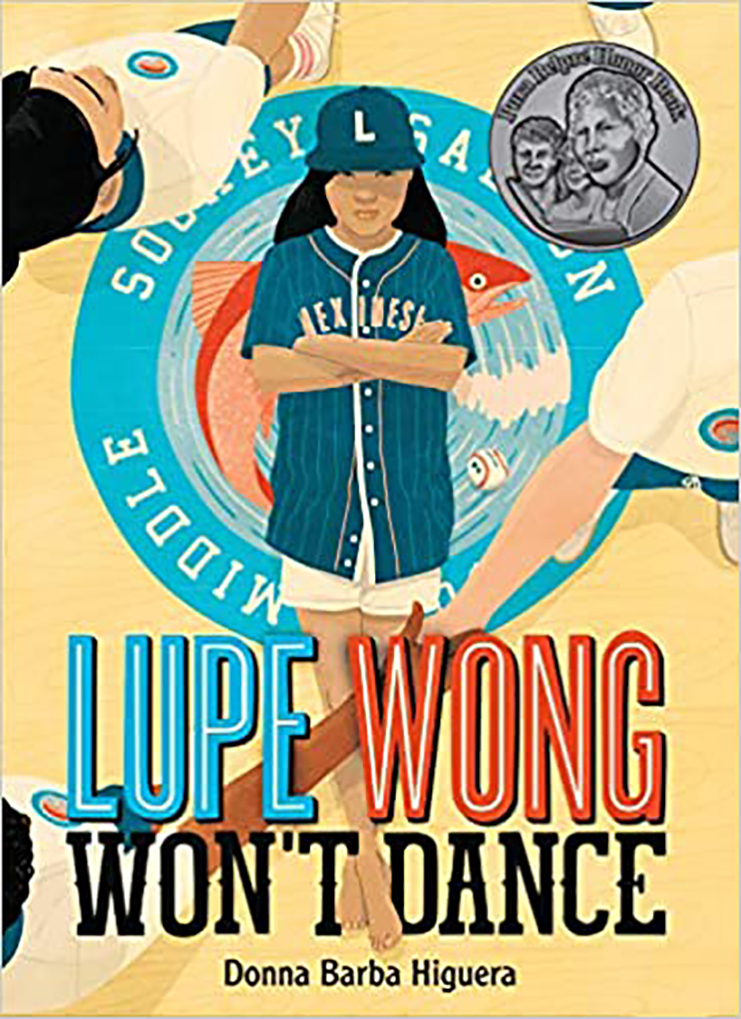 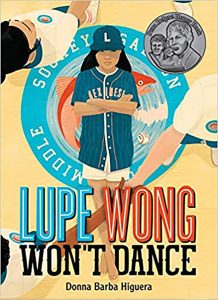 As a writer who is mixed heritage and whose fictional characters tend to reflect one heritage or the other but not both sides of me at once, I was delighted to have my attention called to Lupe Wong, the Chinese Mexican protagonist of the YA novel Lupe Wong Won’t Dance by Donna Barba Higuera.

I am Mexipina (Filipina and Mexican), I have acceded to both internally and externally perceived messages that writing characters modeled after my whole self could introduce unnecessary complications for the reader. Higuera has proven this not to be the case and has done so with an easy grace. Herself of a mixed white and Mexican background, she created the character of Lupe to reflect her own daughters’ Mexican and Chinese mixedness. The result is a multidimensional character who is buoyed by the richness of her multiple heritages while negotiating the blips and trips posed by a world – or microcosmically, a suburban middle school – that has yet to catch up to the nitty-gritty and nuance of all the multis – cultural, racial, ethnic.

Being Chinacan or Mexinese is integral to the story of Lupe Wong, but it is not the story of this book. Nor should it be. People of color and mixed heritages go about their everyday lives like other people, and while their skin color or other markers of otherness do come into play and cannot be ignored, their stories go beyond race, color and ethnicity. What Higuera accomplishes in Lupe Wong Won’t Dance is to raise issues of fairness, justice and acknowledgement of the diversity of this country and weave them effortlessly into a plot that revolves around two embodiments of Americana— baseball and square dancing. Lupe is passionate about the first and would rather the other be relegated to museums.

Seventh grader Lupe is smart, feisty and athletic— traits that serve her well as a pitcher for her Little League team. She also has a reputation for causes— for instance, a dress code policy that doesn’t fault girls if their clothes distract boys, or a bubble to indicate Chinacan or Mexinese on forms that ask for race and ethnicity. Lupe is a girl who’s just asking that the system reflect the realities of society and when it doesn’t, to correct its inequities. As a 12-year-old, she might articulate it differently since she does have a middle-schooler’s way of expressing herself in this lively, first-person narrative.

The book opens with this gem: “My gym shorts burrow into my butt crack like a frightened groundhog.” Such similes, overstated in their comparisons and referencing parts of the lower anatomy, are golden among this age group. The better to express the everyday concerns of seventh graders, such as adequately fitting gym wear. Attend to your shorts or be at the mercy of the mean girls! It’s on this day of a wedgie caused by loaner shorts that Lupe is driven to take up the cause that is the focus of Lupe Wong Won’t Dance.

When the P.E. coach announces square dancing as the next class unit, Lupe fears her A in P.E. is imperiled by this decidedly non-athletic activity. With As assured in her other classes, the A in P.E is a must since an opportunity to meet Mariners pitcher Fu Li Hernandez, the first Asian Latino pitcher in the major leagues, hinges on a perfect report card. With stakes like these, Lupe embarks on a mission to eliminate square dancing from the curriculum. She does so with steely resolve as evidenced in one of the many “would you rather” questions that she and her friend Niles regularly put to each other. Niles asks Lupe if she would rather square dance or eat ten banana slugs a day for the rest of her life. Lupe answers quietly but without hesitation, “Slugs.”

She pursues a series of tactics, each of them backfiring, none resulting in jettisoning square dancing from her life. In the process, she loses her best friend Andalusia (Andy) who has reluctantly joined the soccer team with the mean girls. Niles, with whom she regularly watches Doctor Who, is suddenly busy on Monday nights. In the moments that she feels lost and alone, Lupe receives strength from remembering that the last thing her father told her before he died two years earlier was to never give up on things she believes in.

As she searches the internet to back up her argument that square dancing isn’t suitable for middle school P.E class, she learns the history of square dancing and concludes that “American history is pretty messed up.” Lupe finds that “Cotton-Eyed Joe,” the song that was played for them in anticipation of their upcoming dance unit, was sung by slaves on Southern plantations and that the reference to his “white as cotton” eyes indicated a sexually transmitted disease.

Lupe, in her enthusiasm to use this information in support of her cause to dismantle the square-dancing mandate creates a PowerPoint slide with the argument the “Square Dancing is Directly Related to Sex and Corruption of Youth!”

While this strategy does not have the desired consequences, it leads to others that also reveal more about the history of square dancing and its place in American culture. These revelations are an education for Lupe as well as a means to question accepted customs, such as the tradition that the boy must ask the girl to dance. It’s an education in history, in outdated social norms, and in her own behavior as a person and a friend. She vows to be more empathetic and a better listener to Andy who is Black and to Niles who is on the autism spectrum. She learns when to apply the advice of her Chinese grandfather that not all things have to be a fight. “Accepting something you cannot change and mastering it is not a failure of your principles. It is the opposite of failure.”

Indeed, Lupe is surrounded by words of wisdom, including those of her brother who, regarding the treatment from the mean girls, tells her, “Kids can be evil.” As for the ugly aspects of history, her mother says, “All we can do is give people a chance to learn and become better.” On the humorous side, an all-purpose remedy that hit home for me is the one Lupe’s Chinese grandparents and her Mexican abuela invariably offer up at the first sign of any ailment—Vick’s VapoRub, that staple of Asian American and Latino households.

Lupe derives her strength from her family and her multiple cultures. When the grandparents come over, bearing food to share at a family dinner and everyone holds hands to give thanks for the Chinese and Mexican dishes arrayed there, Lupe thinks, Even I see what a diverse mixture of people we are, but sitting together linked like a chain, I feel like nothing can hurt us in our family.

I don’t know Donna Barba Higuera but I feel a kinship with her. We have the same name. She’s mi tocaya as they say in Spanish. And this book about a Chinese Mexican girl shows how a character’s multiple heritages can be integral to who she is while not taking over the narrative of her life. There is wisdom, humor and compassion in this multilayered story about a multi-ethnic girl and her diverse family and friends who are living their American lives.