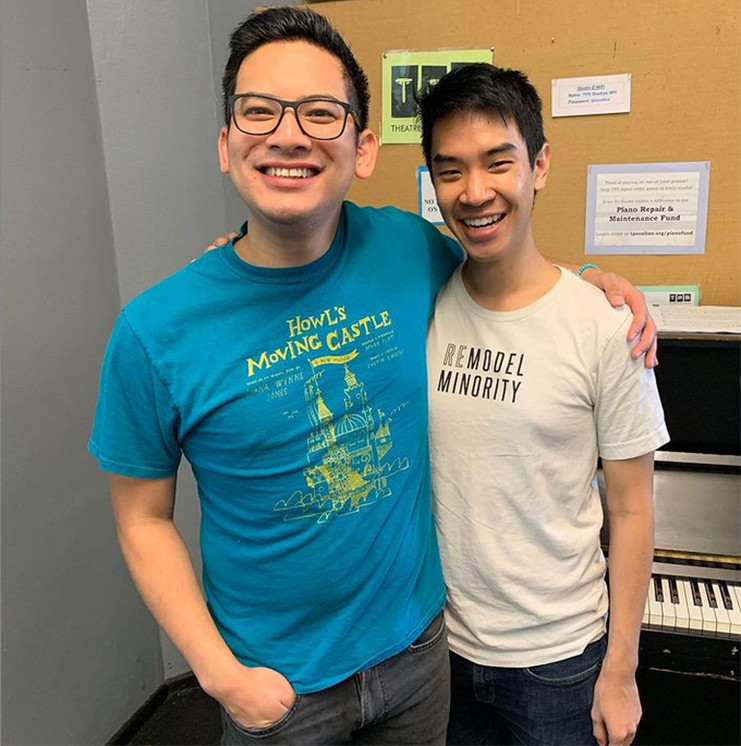 Back in the summer of 2019, the musical-writing team of Justin Huertas and Steven Tran collaborated with local theatre group ArtsWest to present The Last World Octopus Wrestling Champion, a coming-of-age story about a girl who discovers new talents and the arena of love. Now, Huertas and Tran are teaming up again to take this show online, by creating a video concept album with a new title, Swimming.

Justin Huertas is a playwright and actor who often explores  race and identity in his work, and Steven Tran always seeks to  dismantle white patriarchy in his musical compositions. These common interests led them to jointly develop Octopus, a show that earned a Gregory Award nomination for Best New Play in 2019, and to partner on Huertas’s original piece Lizard Boy at the NAMT 32nd ‘Annual Festival of New Musicals.

During the current COVID-19 pandemic, both Tran and Huertas have seen the possibilities of online formats. “As I’ve developed my theater and music careers, I’ve become more interested in multimedia narratives as well as art and storytelling that transcends and intermingles form,” Tran said. “The score Justin and I created for Octopus readily lends itself to a pop concept album format.”

More specifically, Huertas credits Beyoncé with inspiring him. “The visual album Black is King is such a unique way of telling the Lion King story,” he said, “and after watching it this summer, it really sparked my imagination and inspired me to think more expansively about how the story of The Last World Octopus Wrestling Champion could be told.”

The pandemic encouraged the team to think more broadly about accessibility of the arts. “I’m really interested, especially after the pandemic, how we as artists can expand access to theatrical experiences,” Tran said. “How can we shift theatre away from rigid and occasionally inaccessible forms?”

To facilitate the creation of Swimming, Huertas and Tran turned to  Kickstarter to raise funds, and are close to their stretch goal of $15,000. “We’ve learned how excited people are about new stories, and how excited they are to support artists’ visions,” the team agreed. “Because of the support in our community already, we’re able to think on a more grand level.”

Tran emphasized the importance of being able to pay additional artists to contribute to the project. “The financial support from our community means we can aim for even more polish and craft in the final product, and a greater number of collaborators,” he said. “We’re so excited by the idea of connecting and collaborating with a myriad of other local artists of different mediums in illustration, design, and film around the region in order to highlight the artistic fabric of the Pacific Northwest through this intimate, yet heightened, tale.”

With this underwriting in progress, Huertas and Tran have delved into preparation for the album. “So far, we’ve pieced together the set list and have plans to feature the cast from the original production of the musical,” Tran said. “Our plan for the rollout of the album will be to release each Chapter iteratively, allowing each song and video to stand on their own.”

Tran is enthusiastic about recreating the musical arrangements and orchestrations. “These songs were inspired by Justin’s personal experiences and the many love stories he’s collected throughout his life,” he said. “As such, many stand on their own, separate from the fantastical story of the original musical, and we’re excited to highlight them in this new format.”

Before COVID-19, the duo had planned to record a typical cast recording of Octopus in the spring of 2020. “This plan was delayed, of course, and in that delay, we were allowed more time to think and dream about the best way to record this score,” Tran said. “In this dreaming, we landed on the new idea: instead of just a cast recording, we would highlight specific songs, breathe new life into these songs, and supplement them with visual content as well.”

Together, they are tackling the challenges of self-producing. “Both of us center underrepresented voices in our work,” they agreed, “and this album will continue that mission, inspiring a new generation of queer BIPOC youth, showing them that their stories are worthy, and spreading the message of Octopus, that love can mean taking risks, saying yes, and letting go.”

The team is looking forward to publishing their work. “We’re excited for it to be on all streaming platforms where you typically listen to music or  watch video content,” Tran said. “We can’t wait for these songs to be heard around the world and for people new to us to discover this story and score.”

But that’s not all: Tran and Huertas didn’t divulge any details, but claim to have more up their sleeves. “This campaign and album is just one of several projects that we are working on simultaneously!” Tran said. “We have even more planned for the future, and we’re just getting started.”

The Kickstarter fundraising campaigns ended Thursday, March 4th but Tran and Huertas will be accepting funds directly via paypal.me/SwimmingTheAlbum.