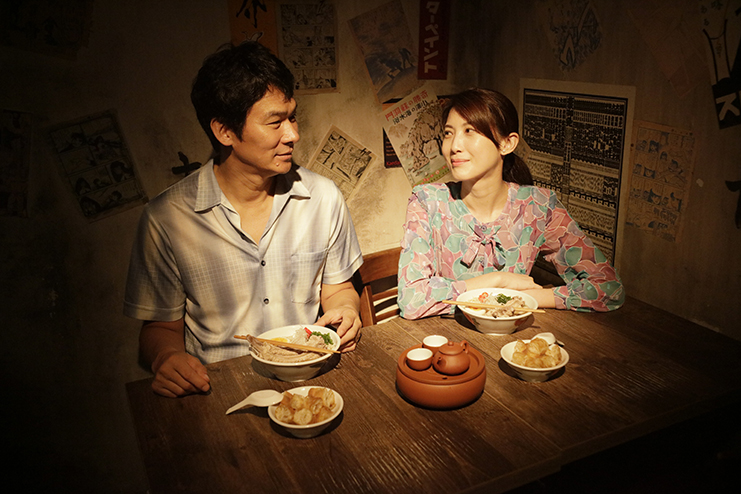 WARNING: Those who enter Northwest Film Forum to watch Ramen Shop should do so with full stomachs or risk the possibility of embarrassing themselves by interrupting other people’s viewing experience with loud, sudden and intermittent stomach growls throughout its 89-minute screening. Eating prior to watching the movie does not guarantee amnesty from hunger; be prepared for a sudden onslaught of cravings for ramen or even bak kut teh by the end of the movie.

Introduction to bak kut teh

Bak kut teh literally means “pork bone tea,” a hearty traditional dish that features pork ribs that have been simmered for hours in a broth mixed with various herbs and spices such as star anise, garlic, cloves, cinnamon, fennel seeds and angelica root. It is often served along with some fried tofu puffs or long pieces of fried dough known as youtiao in China or yao char kway in Singapore and Malaysia. The teh refers to tea which, despite being part of the name, is not part of the broth, and instead, accompanies the meal. The tannins in oolong tea is said to help separate and break down the fat consumed from the pork, hastening its elimination from the body.

The origin of bak kut teh is a bit of a mystery, but it is said to have originated from China’s Fujian province and made by Chinese migrants who wanted to replenish and invigorate their fatigued and weary bodies with the flavors of their homeland, which were recreated with what little they could afford and had access to.

There are three main types of bak kut teh: Hokkien style, which is a darker version thanks to a combination of herbs and spices with soy sauce; Cantonese style, which has more medicinal herbs, creating a stronger taste; and Teochew style, where its main ingredients are garlic and pepper, resulting in a clearer broth compared to the others. To make it more appealing for the masses, other variants have sprouted up such as seafood and halal bak kut teh.

Bak kut teh and ramen both started off as street food and moved on to become main course meals in restaurants as their popularity grew. Eric Khoo, a director from Singapore who is credited with bringing the Singaporean film industry back to life with films such as Mee Pok Man and 12 Storeys, combined both of these dishes to create ramen teh, the original title of the movie.

Khoo uses the universal love of food to weave this cross-generational dramedy that hinges on the pain, trauma, anger, resentment and mistrust that lingers from history and never heals. Khoo himself is an avid foodie who believes memory and identity are associated with food, giving it the power to bridge differences. Perhaps this is why he combines the food cultures of two different countries to weave a story about acceptance, forgiveness and reconciliation.

Masato Yamamoto is half-Japanese from his father’s side and half-Singaporean Chinese from his mother’s side. He lived in Singapore until he was 10 when his mother, Mei Lian, died. His father Kazuo, a talented cook, returned to his hometown Takasaki, Japan, with his son and took over the family ramen restaurant he left behind. Now Masato helps out his uncle and father at the restaurant. During his free time, he experiments with Singaporean cuisine in an attempt to recreate his mother’s home cooking and gets some assistance from Miki, a Japanese food blogger who lives in Singapore. Masato recently moved in with his stoic father, who barely communicates with his son and seems to live in the past. Masato wishes his father would pay more attention to him, lamenting at one point to his uncle, “Sometimes I wish I were a bowl of ramen. At least that way, he’d show more interest in me.”

After his father suddenly passes away, Masato discovers some of his mother’s belongings in his father’s room and finds her journal, which is written entirely in Chinese, and a letter from his uncle Wee, his mother’s younger brother. He decides to go to Singapore in search of this uncle, who owned a bak kut teh restaurant when Masato lived there, and enlists Miki to help guide him through the country and its food culture.

With Miki’s help, he manages to track down Wee. Masato discovers through Miki’s translations of Mei Lian’s journal that his mother wanted to reconcile with his grandmother. Realizing he had never once met her, he asks Wee to introduce them, and Wee reluctantly agrees. After a disastrous first meeting, Masato finally learns the truth: His grandmother did not like his father because he was Japanese and because she had awful memories of World War II.

Realizing his mother was burdened with sorrow when she had died, he became angry at his grandmother’s selfishness and stubbornness. As he grapples with his mixed feelings of sorrow, anger and guilt, he tries to empathize with his grandmother and tries to come up with a peace offering that is a marriage of both Japanese and Singaporean-Chinese cultures by using everything he has in his cooking arsenal that he gathered from his father, Miki, Wee and his mother to make ramen teh.

This story resonated with me because not only am I Korean American, but I also have friends who are from Germany and Japan. The Japanese colonization and the abuse and atrocities that occurred are stories I have heard about throughout my life. While I was working in Korea, I noticed there was still some animosity towards Japan, and sometimes, the politics and history clouded the judgment about Japanese people in general. I have listened to the reflections of my German and Japanese friends about the war, and I have often felt that although they were not involved in the war in any way, they carry the burden, and to some extent, the responsibility of their country’s history on their shoulders because of the lasting effects of the war.

Because of this, I have often wondered, “To what extent should future generations of people be held responsible for atrocities committed in its country’s past?” Ramen Shop reflects this question through a heartwarming and gastronomic adventure that explores and celebrates Singapore’s history, food culture, customs and its enticing dishes, all while exploring family relationships through the medium of food. Cast members do an excellent and convincing job of speaking in languages not their own, and cross-cultural enthusiasts will be delighted to see the comparisons of different cultures. Food enthusiasts will enjoy watching a smorgasbord of good food being prepared and eaten; the fish head curry alone will probably make mouths water. This movie seeks out to prove the healing power of food, and that a bowl of hearty soup can go a long way to communicate a number of feelings when words cannot.

Ramen Shop will be showing at Northwest Film Forum from Apr. 19-25. Check its website for tickets and showtimes.