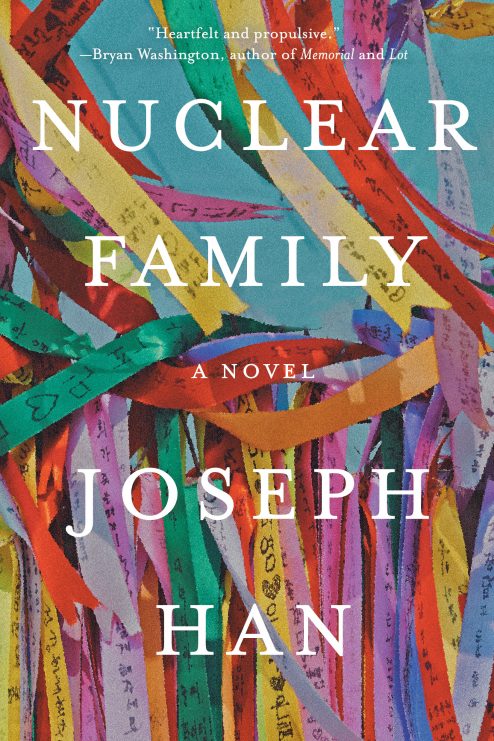 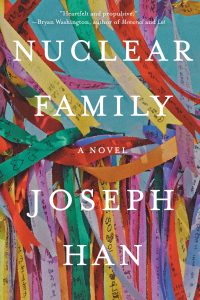 Joseph Han, who was born in Korea and raised in Hawai’i, tells a captivating story of intricate family dynamics, magical realism, and political satire in his debut novel, Nuclear Family. The story follows a Korean American family through multiple perspectives, nonlinear time, and the two locations of Hawai’i and Korea.

The title of the novel, Nuclear Family, may lead one to believe it is centered around the Western notion of a “nuclear family” comprised of the parents, Mr. and Mrs. Cho, and their children, Jacob and Grace Cho. The Chos’ run a successful Korean plate lunch restaurant in Hawai’i.

When Jacob leaves the island to go to Seoul, South Korea for an English teacher job, the story unfolds to become so much more. Tae-Woo, who is Jacob’s dead grandfather, has been confined as a ghost in the Korean Demilitarized Zone (DMZ) and longs to reconnect with the family he left behind in North Korea. The DMZ is one of the most militarized borders in the world, physically splitting what used to be one Korea pre-Korean War into what we know today as North and South Korea. Jacob is possessed by ghost Tae-Woo and attempts to cross the DMZ, only to be shot and arrested by the South Korean army. A video of Jacob’s attempt to cross into North Korea goes viral and affects his family across the world in Hawai’i. Mr. and Mrs. Cho are ridden with worry as Jacob is taken into army custody, Grace is possessed by her desire to escape reality through marijuana, and the Chos’ restaurant business plummets.

Han shows the reality of Asian cultures, specifically Korean American culture, where the concept of a family is not as straightforward as being “nuclear”. Rather, there are complex family relations shaped by the effects of war and multigenerational trauma. The symbolic possession of Jacob by his grandfather tells a message that resonates with Asian Americans today – our families and culture extend beyond the surface into our internal selves, where we grapple with our ancestors’ unhealed wounds.

Nuclear Family may also be interpreted to symbolize the escalating tensions around nuclear weapons between North Korea and the United States in 2017-2018. The novel takes place during the few months before the 2018 Hawai’i false missile alert that spread panic across the island. Han boldly discusses American imperialism, its role in the Korean War, and the effects of war that today’s descendants still live with. The Chos are part of the double diaspora of Korean American immigrants whose ancestors were born in what became North Korea, but at the time of the Korean War, ended up in what became South Korea. The authentic internal dialogues of Tae-Woo’s family and others vocalize histories that are often left out in American literature.

Jacob feels alienated as a Korean American in both Hawai’i and Seoul. The Chos are met with American ignorance when their direct community in Hawai’i suspects them of being North Korean sympathizers after Jacob’s DMZ incident. Other locals in Hawai’i share conflicted feelings towards the two sides of their diasporic identity. They or their ancestors immigrated to Hawai’i under the exploitative plantation work system and now live on the land where their native culture and language were historically banned.

Despite the overarching heavy themes in Nuclear Family, Han uniquely weaves in humor, mouth-watering descriptions of cultural food dishes, and magical realism to tell the story of the Korean diaspora in the United States. There is an overhanging sense of loss, whether it is a loss in identity, family, or history. Yet in the face of brutal reality, Han brings an original story of how a Korean American family confronts their internalized fears and learns to heal together.