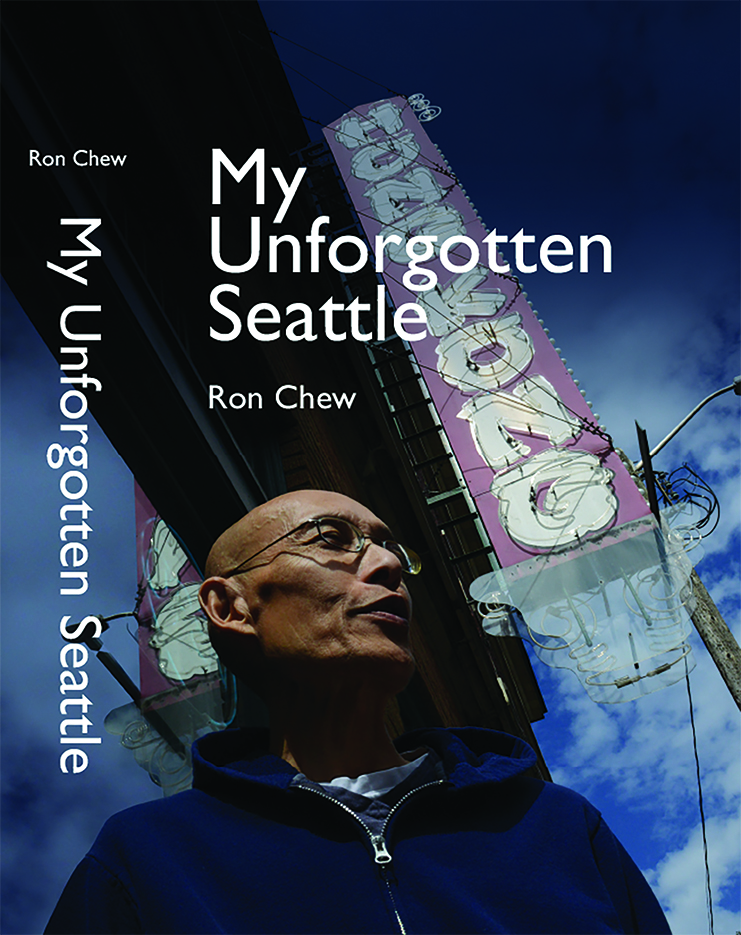 The International Examiner is excited to publish Ron Chew’s memoir, My Unforgotten Seattle, this fall. Books will be available to purchase from the IE beginning in September. More details on how to purchase the book will be on the IE website in the future. All proceeds from purchasing this book through the IE will go directly to the IE. The following is Chapter 11 from the book. 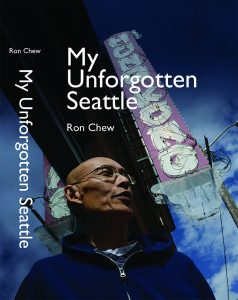 At the Evergreen Apartments, I met Lily Yamada, an older woman with a bun of white hair, a smooth, broad face, a warm smile and a very sweet personality. She lived on the same floor as I did, in apartment 306 at the far end of the hall near the elevator. She worked at a hair salon in Uwajimaya.

She never let anyone inside her apartment and cracked open the door only a few inches to talk. Her place was filled with stacks of newspapers and junk, piled nearly to the ceiling. She told me that she was going to have trouble getting her place cleaned up before the fire inspectors came through to examine units in our building. She had too much stuff.

She revealed to me that she was in Hiroshima when the U.S. dropped the atomic bomb. She was what Japanese refer to as a hibakusha, which translates as “bomb-affected person.”

I pieced together her story from many long hallway conversations. Lily stood just outside her door, the elevator screeching in the background as other tenants came and went. She nodded and bowed politely as she relived vivid moments from her past.

When the U.S. bomber the Enola Gay dropped the atomic bomb on Hiroshima, Lily was 25. She was at home with her parents, both 66, her sister, 22, and brother, 16. They were at the epicenter of the explosion, a zone from which few Japanese emerged alive. Lily had just stepped out of the house. The force of the bomb sucked the windows of her house inward, shattering them to bits. After the explosion, “black rain” dropped from the sky. Lily’s clean school uniform turned black.

Fires broke out everywhere. Lily saw victims hobble about aimlessly, calling for water. Their clothes were tattered. Their twisted faces and bodies were seared. Skin melted away, exposing raw bone and ghastly purple flesh. The lips of many were vaporized. People collapsed and died without a sound. Children’s screams of pain filled the air. Lily soaked towels under broken water pipes, squeezing out the water above the mouths of victims.

Everywhere, anguished people lurched toward the river. “But the tide was out, so they couldn’t get to the water,” she told me. “Pretty soon, you see all these bodies lying out there. And the tide came in, and the water turned red and all these bodies swelling up all along the river.”

Lily tried to assist her badly injured parents and sister. She went to the army hospital. The doctors were overwhelmed by the flood of arrivals.

Lily left the city before nightfall to find food through the black market to bring back for her family. “It was so quiet, you couldn’t hear nothing,” she said. “Not even the sound of the wind. There were no dogs, no birds, no mice. I was so scared. I was afraid I would step on those skeletons all around me. I ran and I hurdled over them. Good thing I had been running track so I could run fast.”

Lily had been a star track athlete. She was stronger than most men. She believed that her exceptional physical conditioning contributed to her survival.

Her mother, father and sister all died within 20 months of the explosion. Lily and her brother spent a lifetime dealing with the chronic effects of radiation.

It took a year for Lily to recover from her injuries. She recalled injections of B vitamins and doctors pricking her to find blood vessels. “There was no blood,” she told me. “The worst thing is what the future may bring. You never know if something inside might be wrong. The kidneys, the lungs, the heart, all those things you never know until it goes wrong.”

From Lily’s apartment, which faced Jackson Street, the playful screams of little children lining up for the school buses troubled her. She avoided Asia Barbecue downstairs. The smells of roast duck, chicken, sausage and barbecue pork hanging in the window sickened her.

Lily’s brother Frank was in the U.S. during the war. He was fortunate to have escaped the bomb. But like thousands of other West Coast Japanese Americans, Frank was incarcerated by the U.S. government. He volunteered and became a bilingual interpreter for the U.S. military. “If I was in the U.S., I would have suffered either way,” Lily reasoned.

Frank also lived for a time in the ID. When he asked her to prepare roast turkey for Thanksgiving, she told him she wanted to make another dish instead. She didn’t tell him the real reason—that it would remind her of the children in Hiroshima. “It’s just like someone put them in an oven and turned on the heat and cooked them,” she lamented, shaking her head.

On Sunday, May 13, 1990, I bumped into Lily after a morning visit to my parents’ house for Mother’s Day. I had just given my mother a gift-wrapped box of macadamia nuts, almonds and cashews. After thanking me, my mother said, “Next year, please don’t buy nuts for me. I like them, but I can’t eat them. I don’t have teeth.” Oops. I had forgotten about my mother’s full dentures.

I told Lily this story. She beamed. “That’s nice of you,” she said. “You only have one mother for your lifetime. That’s all.”

I suddenly remembered that Lily’s mother had been killed by the Hiroshima bombing. Oops again.

On this Mother’s Day, Lily was heading out to work. Lately, she said, her health had not been good. On her way to Uwajimaya, she had to stop three times in four blocks to catch her breath. She spoke about how stressful it was at work. The salon manager yelled at her and talked badly about customers behind their backs, which she didn’t like.

Lily said that getting angry made her stomach bleed. She felt better after the blood passed out of her body. Doctors couldn’t diagnose the cause. She was checked for colon cancer, but the test came back negative.

Worried about her health, Frank urged her to return to Japan to live with their younger brother. “But what can I do?” she told me. “If we are both retired, then there is nothing to do except stay home and fight all the time.”

She was in a quandary. In Japan, the government took care of her medical costs. But there she didn’t have Social Security. In the U.S., Medicare covered 80 percent of her health care. “If they find cancer,” she said, “nothing I can do. I just die.”

She railed against those who supported war. She said she sometimes thought it would have been better to have died in the Hiroshima bombing.

I was speechless. I listened quietly. After realizing the time, Lily apologized for imposing on me. She bowed and hurried toward the elevator. It was time for her to go to work.

I thought back to grade school. During the October 1962 Cuban Missile Crisis, I watched chilling public service announcements about underground survival shelters. I learned about drinking water from the toilet bowl tanks and eating dry rations from tins. I saw how people could build backyard bomb shelters.

But I never had to face the reality of an atomic bomb attack. Lily’s story reminded me of the war experiences of my own parents. My Chinese name, Jick Ping, translates as “plant peace.” I hoped I could remain faithful to the meaning of my name.

Several months after I moved out of the Evergreen Apartments, I went to pick up lunch at the deli department of Uwajimaya. I asked at the hair salon if Lily still worked there. I was told that she had left months earlier. I also discovered that Lily no longer lived at the Evergreen Apartments. Maybe she had returned to Japan. I never saw or heard from her again. I never had a chance to say goodbye.

Ron Chew will present his memoir My Unforgotten Seattle online with the Museum of History and Industry on September 16, with Seattle Town Hall on October 1, and November 21 with the Wing Luke Museum. Check their websites for more information.