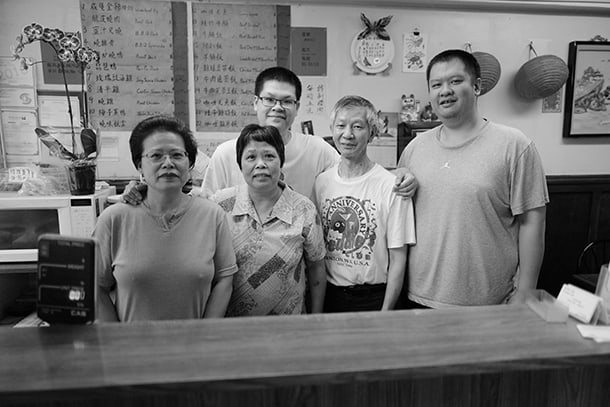 Salt and pepper chicken with rice. That’s my usual order at Fortuna Cafe. It’s one of my favorite meals in Chinatown served at a restaurant deeply rooted in Chinatown history.

Fortuna is now closed after 24 years of down home food and personal family style service. I mean there are no employees. Just three owners.

I can’t blame Fortuna’s closure on gentrification. Gentrification that is gradually taking over sizable and historic real estate in our community.

Fortuna’s owners are retiring. After 24 years of serving salt and pepper chicken and a menu full of Chinatown classics.

Sisters Maggie Mar and May Lui were always there to greet customers. May is the one with the warm and caring smile. Gentle demeanor.

Maggie’s hair is always perfect. Early on, I would just ask for “that chicken stir fry.” Maggie figured out I meant the salt and pepper chicken. Onions included. Donnie Chin hated onions.

May’s husband Kut “Ken” is the only chef in the Fortuna’s small kitchen. He’s responsible for the salt and pepper chicken I crave.

I often order lunch to share with friends at the Sun May Company around the corner in Canton Alley.

I like to visit the Sun May Company. I often order food. Ken does his thing on the wok and delivers the meal to Sun May. Fortuna’s side door leads to Canton Alley. Making for perfect neighbors. I don’t know of any other Chinatown restaurant with such personal service.

The weekend after Fortuna closed, I had to go wait in line for a take-out order at another Chinatown restaurant. Putting up with being ignored by the host when I’m standing there with money in hand.

Gone are the old days of Fortuna, which represents old Chinatown in so many ways. It was like visiting a good friend’s home for a meal.

I’m going to miss these delivered meals from Ken, the chef at Fortuna. I’m going to walk by Fortuna and wish it was still as I remember.

They make me feel at home each time I visit. Like old friends.

The sisters often ask if there was any progress in Donnie Chin’s murder. I don’t usually have a good answer.

Sun May is the original location of the International District Emergency Center which Donnie is legendary for.

Donnie became good friends with Fortuna, often hosting IDEC family meals upstairs in the mezzanine, where a graceful curved railing offers a view of the restaurant below and King Street. A classic example of old Chinatown that needs to be preserved.

The sisters say Donnie loved them and their restaurant. They say they miss Donnie very much. I believe them.

Fortuna is located at the corner of King Street and Canton Alley. Anchoring the historic west Kong Yick Building.

I can remember when this old storefront was the headquarters of the Kuomintang. Donnie and I called them KMT for short. During the Chinese New Year, the Luck Ngi Music Club would perform in what was the dining room of Fortuna. They would always invite Donnie and myself to eat. Just think, Donnie and myself with long hair and being American born, invited to eat with the old timers of Chinatown.

That was before Fortuna came along of course. Now 24 years after opening, the family decided to retire.

The day before Fortuna closed, I visited and the restaurant was busier than I’ve ever seen it. Normally Fortuna is pretty quiet compared to it’s more trendy neighboring restaurants with their annoying sidewalk blocking crowds.

All week long customers had been returning to Fortuna for one last time. May’s sons Kevin and James were recruited to help out.

On Fortuna’s last day, I had just come from a baby party with my red egg. There was one table occupied by longtime customers.

Maggie offers me a seat at the family table set aside for themselves to eat or sort through vegetables or read newspapers.

A stack of containers contain Fortuna’s deep fried chicken. The customer ordered a lot of chicken, like it was going to be the last time. And it is.

While in the kitchen, May offers me a deep brown fried chicken leg. She hands me a paper towel for the grease.

“You want some cha shu?” May asks. She reaches into the barbecue window and takes out a lean piece of pork and slices it with a small cleaver.

Like I said before. She fills a carton with pork. Then shows me the contents, emphasizing how good it is.

“Good,” she says one last time.

A few more customers start coming in. Mostly for the barbecue items.

“We will miss the customers,” said James Lui.

In losing Fortuna, the community loses a piece of old Chinatown. I’m going to miss Fortuna.