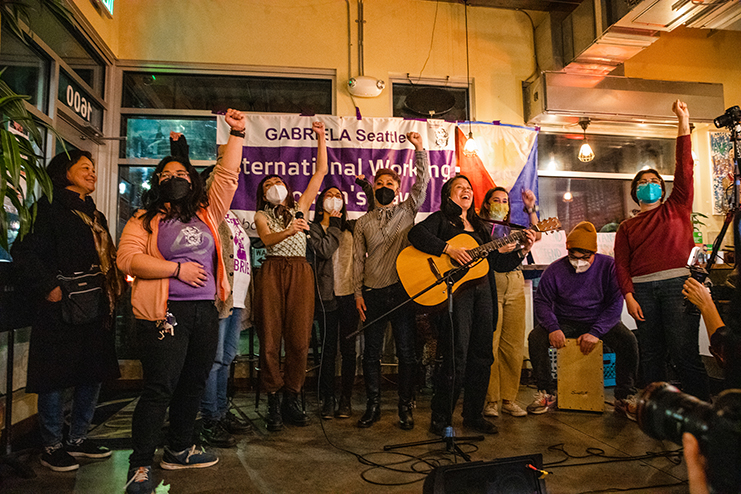 The aroma of freshly baked empanadas and savory pancit noodles filled the air as dozens gathered at Beacon Hill’s Station Cafe on the evening of Tuesday, March 8. With masks and bottles of hand sanitizer spread around the polished wooden tables, soft murmurs filled with anticipation blanketed the room.

The food was an aunt’s special recipe, said Jill Mangaliman, chairperson of GABRIELA Seattle, a Filipina women’s rights advocacy group. In the spirit of International Women’s Day, Mangaliman and other community organizers gathered to celebrate and amplify working women’s rights in the Philippines and beyond.

“For Filipinos, this day means a lot to us because the number one export in the Philippines, unfortunately, is people. Human labor, the majority of which are women, Filipino women, because there aren’t jobs at home,” Mangaliman said. “… People are forced to migrate and live all around the world. There’s Filipinos everywhere and just today is an important day for us because we are really highlighting that struggle, that continual need for a better system that meets the needs of our people.”

Over 160,000 Filipinos live in Washington as of 2020, comprising the second-largest Asian and Pacific Islander (AAPI) ethnic group in the state. Washington’s population has grown more diverse over the years – the AAPI population alone has risen 102% since 2000 – and now numbers over 870,000.

Over time, the flow of Filipino migrants has influenced the population that now lives across the world, including in Seattle. Many Filipinos, including Mangaliman’s parents, traveled overseas to find better economic opportunities to support their families, only to find themselves often employed in low-wage positions with poor working conditions. The struggles migrants face in the quest of establishing economic security are often not voiced, even to their own family, Mangaliman said.

“A lot of the [struggles], I didn’t know five or 10 years ago. Thankfully I found a community. I learned about my history, and learned about this long struggle and started to build that confidence that we can change things.”

At Tuesday’s community round table, a panel of diverse Filipina speakers shared their experiences of educating and organizing the workers’ rights movement. Cami Laborte, president of the UW Chapter of Pi Nu Iota, a Filipinx-interest sisterhood, shared the same sentiments as Mangaliman and encouraged other young people to learn about Filipino history from the community, if not from family.

“There’s so much value in just starting to talk to someone … get to know why they are invested in [the Filipino rights movement],” she said. “Then you ask them, ‘How do I learn more? What sort of action steps do you recommend, or are asking from the community?’”

Jessica Valdez of the International Coalition for Human Rights in the Philippines (ICHRP) and Maria Bayatola of the Filipino American Political Action Group of Washington (FAPAGOW) joined Laborte as fellow panelists.

Ang called attention to the unique role that overseas Filipinos play in their respective communities and called for efforts to learn about their migrant struggles, which have historically remained unspoken.

“When you don’t know your own history, you are bound to repeat it,” she said. Ang, who was born in Manila and eventually raised in Gig Harbor and Tacoma, said Filipinos are still intrinsically connected to their country’s history, even overseas.

A common thread of urgency underscored each speaker’s view. Mangaliman spoke of the dual-crisis Filipinos are facing: the COVID-19 pandemic continues to strain the community’s access to basic health, housing and nutritional needs, while workers’ rights hang in the balance of the upcoming Philippine election in less than 60 days.

Mangaliman and other community organizers are critical of current Philippine President Rodrigo Duterte’s militant approach to the pandemic and war on drugs. According to Mangaliman, the passing of the 2020 Anti-Terrorism Act in the Philippines – which allows groups suspected of terrorism to be detained without warrant – targets human rights and mutaual aid groups that are “doing what’s needed that the government has failed to do.”

“For myself and for kasamas here in the U.S. who are speaking out, we’re also being terro-tagged by the Philippine government,” Mangaliman said. “We’re asking people to protect activists, protect those who use their voice for justice.”

After Tuesday’s roundtable, GABRIELA Seattle members distributed colorful zines with recommendations on what overseas Filipinos can do to aid Philippine migrant workers and advocates. The 10-point agenda encourages people to provide aid to migrant workers and families, advocate for access to quality, affordable health care, and strengthen job opportunities in the Philippines, rather than labor export programs.

In June 2021, U.S. Representative Susan Wild (D, PA) reintroduced the Philippine Human Rights Act, which would suspend U.S. security assistance to the Philippines until the government is held accountable for violence towards dissidents.

“By blocking assistance to Philippine security forces until such time as human rights standards are met, this bill makes a commonsense proposition: Standing up for human rights requires more than rhetoric,” Wild said in the statement accompanying the reintroduction. “It requires action.”

Several Congressmembers have pledged support for the act, including U.S. Rep. Pramila Jayapal.

And in Beacon Hill, before going separate ways again, a Pinay choir gathered to celebrate the continued fight for Philippine rights, through song and calls to action. To the gentle strums of an acoustic guitar, they sang the River song by Philippine band Diskarte Namin, which celebrates the successful protest of people of the Cordillera region against the proposed damming of the Chico River.

“Did you know that freedom looks like a river / flowing free and strong like how we found each other,” they sang. “And yes together we will work, try hard to make life better / the way that water carves through stone / But we can’t do this alone.”