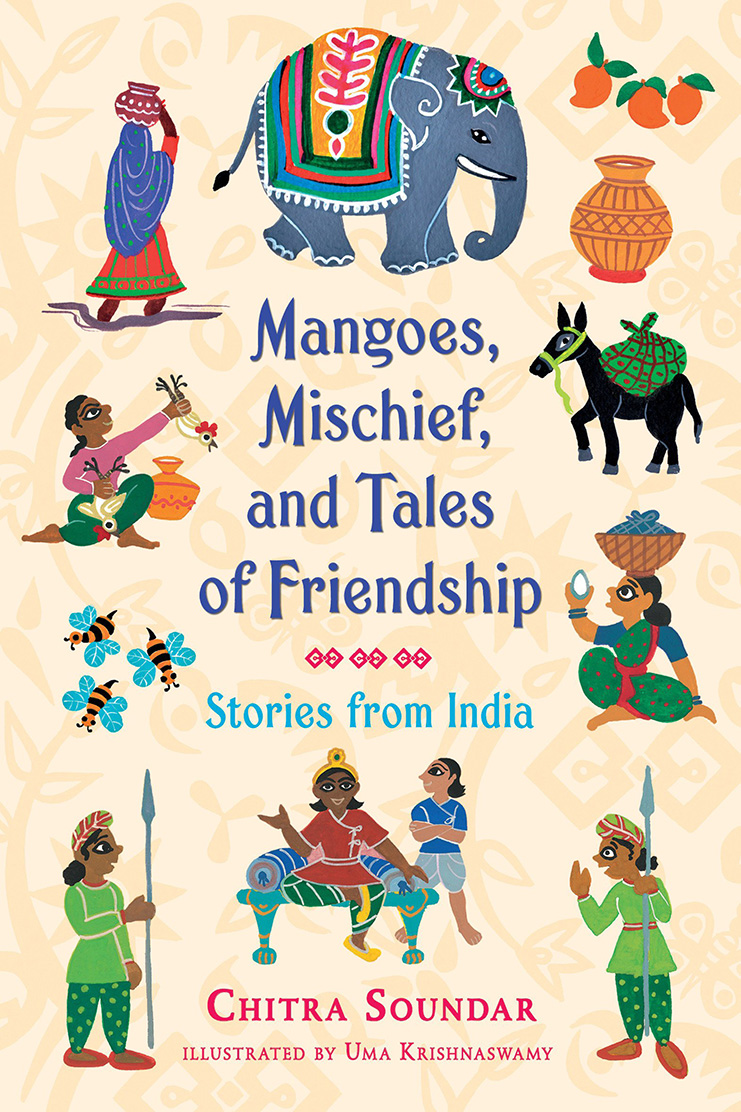 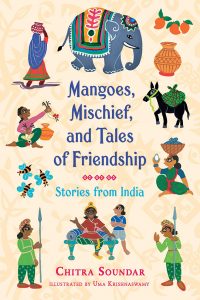 Replete with humor and drama, Mangoes, Mischief, and Tales of Friendship by Chitra Soundar, a collection of short stories, is reminiscent of stories of the 16th century Mughal Emperor Akbar and his advisor and confidant Birbal. Chitra Sounder’s protagonists are two 10-year-old mischievous and precocious boys who courageously use their intellect to solve tricky problems in King Bheema’s court.

Veera is the king’s son and his closest friend, Suku, is the farmer’s son. Veera and Suku are tutored daily in mathematics, sciences, economics, and different languages. They delight in their archery, horseback riding, wrestling, fencing, and swimming lessons. At the end of the school day, they are given the freedom to roam the capital city of the small kingdom located in the foothills of the magnificent hills of Himtuk.

What Veera and Suku love most is hiding behind the large gold curtains in the courtroom or in the viewing gallery of the queen’s chambers and eavesdropping on the happenings in King Bheema’s court. Thus they learn about governing, justice, fairness and kindness at the feet of the king himself.

The book is divided into two previously published smaller books: A Dollop of Ghee and a Pot of Wisdom and A Jar of Pickles and a Pinch of Justice. Each book has four stories of Veera and Suku’s adventures in meting out justice and reprimands when the king is busy tending to other matters of his kingdom. Uma Krishnaswamy’s illustrations lend the right touch of mischief and fun to the tales.

The first case Veera handles is a contretemps between a wealthy mithaiwala, sweetshop owner, and a poor man. The owner wants the farm laborer to pay for enjoying the aroma of butter, sugar, cardamom and saffron from outside his shop but not buying anything. The laborer says that he only has money for staples, food for his family, and can only enjoy the aroma of the sweets. To the laborer’s shock, Veera asks him to pay the owner all his money. Then he tells the owner to enjoy the feel of the money before returning it – a fair exchange for the enjoyment of the aroma. Veera goes a step further and gives the plate of sweets that the owner has brought to bribe him to the laborer’s children. Such thoughtful selflessness at age 10 shows what a wonderful king Veera will make when he grows up. Henceforth King Bheema lets Prince Veera have his own court.

Who Stole the Laddus?

Once the king tasted the sweetshop owner’s laddus, yellow balls of lentils fried in sugar syrup, he becomes smitten and demands that he get a box all for himself. He sends down a mandate to the kitchens that no one is to touch his box. Unfortunately, when the box is opened, one laddu is found missing. The king is enraged, and to pacify him, Veera says that he will find the culprit. He asks the sentries to fetch 20 pieces of firewood of the same length. He then gives each of the kitchen staff one piece and asks them to step through the pantry while invoking the God of Honesty by reciting “Satyameva Jayate.” Veera cautions them that the firewood of those telling the truth will shrink by one inch. When Veera collects all the pieces, he find one piece that is an inch shorter – the guilty man precut his piece hoping to not get caught. Veera correctly identifies the psychology of a guilty conscience and demonstrates his prescience and wisdom.

The entire capital city dislikes a poor man in rags named Dhuri who is rumored to spread bad luck in the whole kingdom. Apparently, all a person needs to do is see Dhuri or talk to him for bad luck to descend on himself. Veera doesn’t believe it and is determined that the king should meet him like all his other subjects and exonerate him. However, one sight of the man through the palace windows, and silly mishaps start occurring to the king. He breaks a glass of water; the royal chef is ill so his favorite breakfast couldn’t be made; he bangs his leg badly. King Bheema blames Dhuri. Dhuri said that he doesn’t spread ill will to anyone, but he is filled with bad luck. He has no work, no friends, and no family. However, the king is not convinced and condemns the man to prison.

Veera is shocked and courageously stands up to his father saying that his pronouncement is unfair and that he, Veera, has been taught to raise his voice against unfairness. He then accuses the king of spreading more bad luck than Dhuri. The king is astounded, and the court horrified. Veera tells the king that he saw Dhuri and minor issues happened to him, but Dhuri was merely coming to see him, and now he is imprisoned. Dhuri harming the king is superstition but his harm to Dhuri is deliberate. The king atones for giving in to his emotions and behaving unjustly. He then praises Veera for his strength of mind and integrity.

All is Well with Mango Pickles

Two men, Kasi and Pawan, come to plead their case. Before going away on his long trip, Kasi put all his precious jewels in a jar and gave it to Pawan saying these were the mango pickles his mother had made before she passed away. Upon returning, he asks for his jar back, but instead of the jewels, it is filled with pickles. Pawan denies thieving.

Veera is stumped. Then he realizes that he knows a thing or two about pickles. He asks to look at the pickles. Like a connoisseur, he examines the look of the pieces, sniffs the aroma, and tastes them. He concludes, these were fresh pickles, not ones that were a year old. So Pawan is caught and has to atone for his sin by working in the palace kitchens. Veera then goes on to create a vault of safekeeping for the people of the kingdom who want to keep their valuables safe when they go away on long journeys.

While all the stories are highly entertaining, it is Soundar’s writing that elevates them to art. She paints vivid scenes with her words, describing in great detail just what children would be interested in knowing about Veera and Suku’s adventures. Her uncanny insight into children’s psyche is what makes this collection of short stories so memorable.