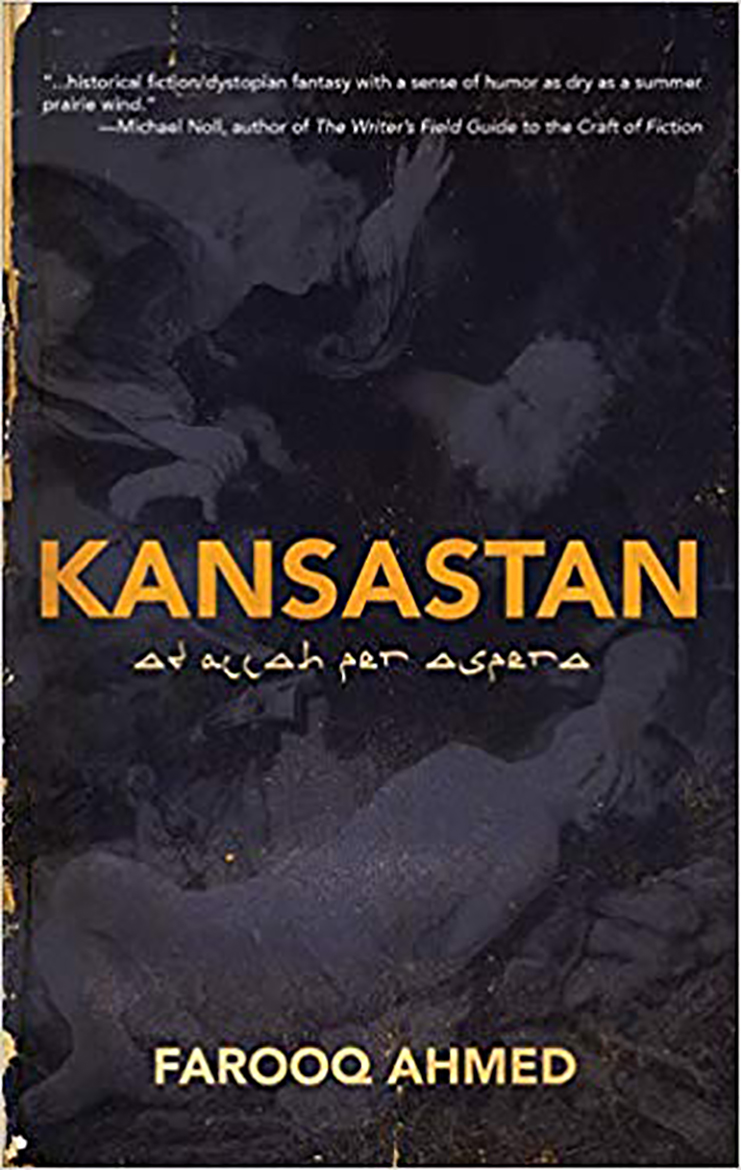 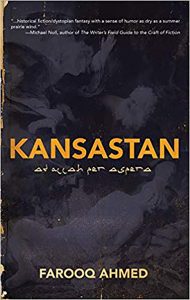 A quirky, dark and dystopic novel, Kansastan evokes the American civil war but also could be read as an allegory for our times. In this novel, Kansas and Missouri are in the midst of a civil war and bands of roving militia clash in bloody battles.

An orphan goatherd, battered and bruised, arrives in a mosque and shelters in a ramshackle minaret. The Imam makes him scrub and clean the mosque and treats him with indifference. The goatherd, though, is convinced that he is destined for bigger and better things.

Enter the goatherd’s aunt Maryam and his cousin, Faisal. We learn that Maryam was abandoned by her husband when pregnant with her second child. Their first had died because she was unable to produce milk to nourish it. The new baby seems miraculous as light emanates from Maryam’s womb and she produces so much milk that she is able nurse not just her child but the children of many in a refugee tribe thus achieving a goddess status. Tiring of this life, Maryam sneaks out of the settlement with her child and arrives at the mosque to be welcomed by the Imam Bahir as a revered one.

The goatherd is happy to have family although he is consumed with jealousy for Faisal who is treated as a prophet and raised by the Imam to lead the congregation. Faisal is taught to read and write their ancient language, delivers sermons that inspire his people, and daily enrages his cousin who secretly plots an overthrow of Faisal.

Faisal performs many miracles—he cures the crippled goatherd of his limp, manages to destroy a copperhead snake that lives on top of the minaret, finds fresh water in the mosque and thus saves them from having to trek for miles for water and so on. The goatherd though believes that the cousin is a trickster and not a miracle worker. Tensions mount and both men fall in love with the same woman. She is, however, married to Faisal, and on their wedding day the goatherd kills the drunk Faisal and impregnates his somnolent bride.

Framing this family drama and struggle for power and numerous battles and encounters between Kansans and Missourians in the Civil War including one reworking of John Brown’s 1856 Bleeding Kansas crisis. John Brown and his followers join forces with the Imam’s people in a battle against Missourians. The Civil War inspiration intertwined with a primarily Muslim militia in this novel seems to signal an impending political crisis in the United States on the question of Muslims and refugees. Yet, this idea is not fully explored, and the novel revels in allusions to the Old Testament and Islamic folklore leaving the reader uncertain about the political vision that spurs this dystopic novel along; after all, such novels hint at an ideal world and lament its loss by depicting the corruption of that ideal.

The novel is funny and its narrator, the goatherd, is an engaging, twisted and sorrowful character. The dark humor, however, disappears in the middle of the novel, leaving the reader with an unrelentingly dysfunctional character who may or may not be quite sane. There’s only so much violence and bloodshed and abuse of animals a reader can take before the novel loses its charm.