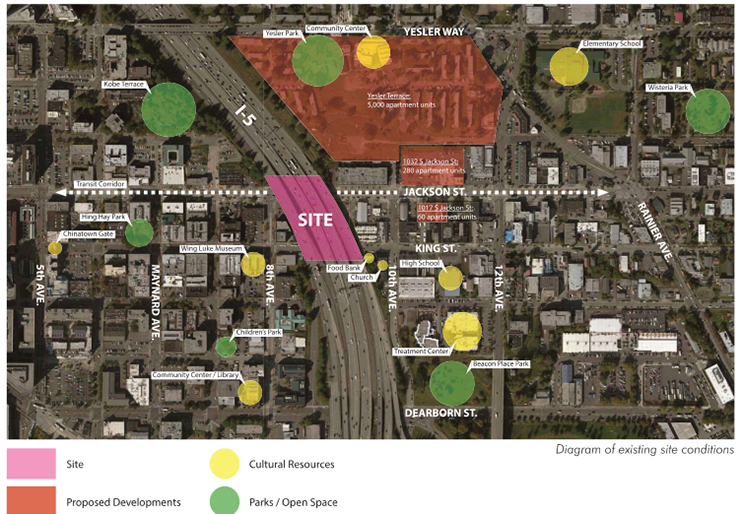 A plan to transform the I-5 freeway underpass to better serve the Chinatown International District (CID) neighborhood is still in first-draft form — but some design proposals are already controversial.

A draft plan for the space includes a multipurpose area for skateboarding and performances, a basketball court, rock climbing, art and more. The underpass also contains a parking lot owned by InterIm, which would likely be unaffected by the new park plans.

The CID Coalition (Humbows Not Hotels) has raised concerns that these elements are not appropriate for the neighborhood, and would create hostile conditions for homeless people.

The project is far from breaking ground, and plans are not set in stone. InterIm Community Development Association — which is coordinating the I-5 Underpass Park Steering Committee that manages the project — is seeking more feedback. “We’re still gathering information, and we’re willing to change up the design of the project,” said Tom Im, InterIm deputy director.

Starting in 2016, InterIm collected hundreds of surveys from the neighborhood, which informed early design ideas. The project is undergoing schematic design, which can be used to leverage more funding. There is no funding to actually build a new park yet.

For decades, the I-5 underpass has been an unsightly feature of the neighborhood, said Im. Built in the 1960s, it “‘cleaved’ or ‘hacked’ the community,” dividing Little Saigon from the rest of the neighborhood and contributing to air pollution. “The neighborhood has sort of grown under the shadow for a number of decades,” said Im.

In 2015, InterIm hired a consultant to help design art under the freeway. At the time, residents were concerned about public safety in the area, which had drawn a homeless encampment. There was also drug activity in the underpass.

How to respond to encampments in the CID is controversial, Im said. The underpass remains a public safety concern, he said, and a future park could help address it. “It might not be resolvable by what we build there, but if we are to build anything, it should be a successful project.”

Almost 300 surveys provided input from the community, along with two community design workshops, which narrowed down design ideas. InterIm also looked at examples of freeway underpasses across the U.S. and drew upon its own understanding of community needs.

In surveys, people were most interested in creating new retail spaces under the freeway, and activities that could improve public safety, Im said. Other ideas included sports activities like basketball and skateboarding, more lighting, art work, a flea market, dog park.

InterIm continues to receive varied feedback from the neighborhood, said Lizzy Baskerville, environmental design and sustainability manager at InterIm, through surveys, community design workshops, and meeting seniors in the Danny Woo Garden. Some want a dog park, while others are opposed. Many people want better lighting in the area. Others want a mobile health center, a public restroom. “Such a passionate and engaged neighborhood is really awesome,” Baskerville said. “I think it’s a sign of a healthy neighborhood.”

The schematic design for the project includes a basketball court and rock climbing on the north side of the space. South of King Street, ideas included a dog park, and a space for elders to sit while waiting for groceries from the ACRS food bank.

Shortly after InterIm announced a new online public meeting related to the project, and a new survey from the design team, the CID Coalition released a statement opposing aspects of the schematic design.

Marlon Herrera, a member of the Coalition who served on the City Parks Commission, said the skate park proposal stood out as inappropriate for the history or demographics of the CID. “We just thought that the skate park specifically was catering to a very, very small slice,” said Marlon Herrera. “Not the elders or working class folks who actually live in the neighborhood.”

Im believes it’s a stereotype that only white kids or suburbanites use skate parks. “I know a lot of APIs that use skateboard parks,” he said.

Im noted that the plan is for multipurpose activity zones — the space could accommodate both skateboarding and a concert, for example. The goal is to design a space that people would use a majority of the time, which is why basketball, skating, and other physical activities made it into the schematic design.

Herrera worried that creating a skate park or dog park is an anti-homeless measure intended to create hostile architecture. “The purpose of this project was to activate that space so people can’t sleep there,” he said.

The CID Coalition wants to see green spaces, a garden, market space, meeting spaces under the freeway. They believe the surveys should have included a sanitation station, mobile health clinic, mutual-aid station, and exercise space for seniors as options.

Im said certain popular options — like retail — had to be ruled out of the schematic design after careful consideration. The underpass space is owned by the Washington State Department of Transportation, which has regulations intended to prevent fires under the freeway, which could create visibility issues for drivers above.

Greenery and gardening under the freeway is also unfeasible, Im said. While InterIm is in favor of more greenery in the neighborhood in general, the underpass does not receive enough sunlight.

Baskerville said the CID Coalition’s feedback was helpful in informing the design of the project. “I think they’re definitely valid concerns and I think it’s been really great to have that feedback,” she said.

InterIm’s engagement with the community was slowed by the COVID-19 pandemic, but the organization handed our surveys at Hing Hay Park, spoke with seniors in the Danny Woo Garden, sent out 100 hard copies to buildings, and digitally. “We’re trying to do as much outreach as possible under these conditions,” said Im.

The pandemic has made it challenging. “We have limited ability to make sure that everybody’s voice is heard,” said Baskerville.

Herrera attended a meeting with InterIm recently, and thought the organization listened to the CID Coalition’s concerns — but many of these concerns remain, as next steps are yet to be determined. “We are still hopeful that they can address some of our concerns.”

Those interested in sharing their feedback about the project can fill out this online survey.