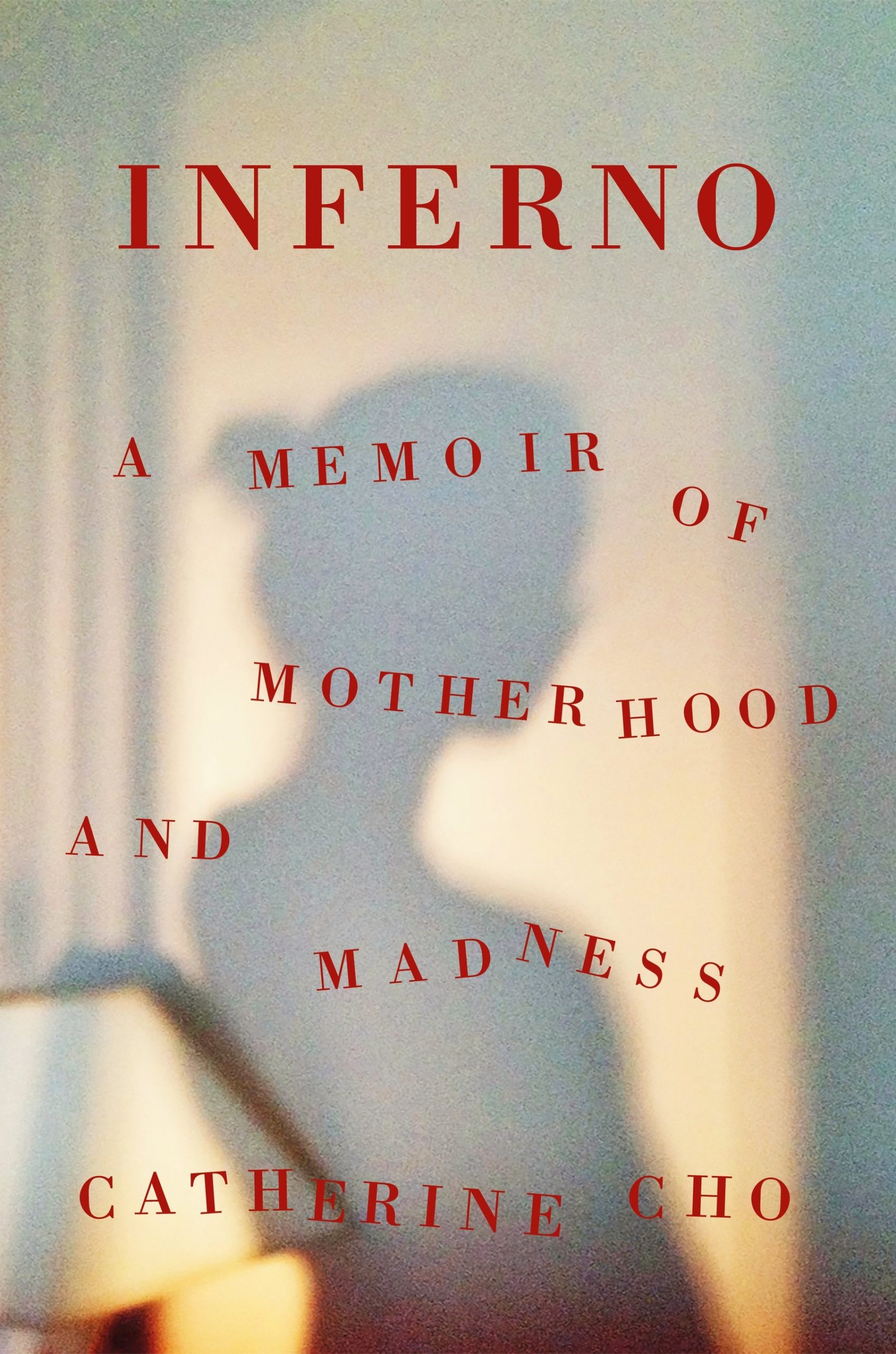 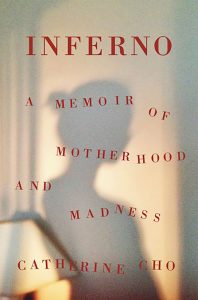 Catherine Cho’s memoir, Inferno, was on top of my stack of to-be-read books. I’d been asked to review it but at the moment was teaching classes on Zoom and gearing up for the holiday season at the bookstore where I work. It would take me a little while before I could clear the decks enough to give it the attention it deserves.

And then, when I did have some time, I chose a different book to read, one underneath Cho’s. And then another.

The subtitle of Inferno is A Memoir of Motherhood and Madness. The cover shows a silhouette of a woman absent of features, the fractured type of the title written over her. I kept looking at it, telling myself I’d start reading it tomorrow, but then I wouldn’t. The book had a presence, and I was avoiding it. When I finally opened it, I found this line: “. . .I can sense that it’s a wound, and I have no idea how deep it goes.”

When we first meet Cho, she’s in an involuntary psychiatric ward in New Jersey. Mother to three-month-old Cato, she’s been admitted to the hospital after going several days without sleep. Even the cocktail of drugs the doctors gave her couldn’t induce sleep; “my body rejected” them, she says, and when she looked at her son she saw “devils in his eyes.”

Cho is a young professional with a career in publishing; she and her husband James are Korean Americans living in London, and when their son is two months old, they make an extended trip back to the U.S. to visit friends and family. “We did a fateful thing,” she writes on the first page of the book, “we left our home.”

She explains the Korean customs that protect a new baby and its mother: 21 days must pass before mother and newborn leave the house; certain things are hung to discourage guests and ward off evil spirits; traditional foods are eaten, prayers are said, and, after 100 days, there is a celebration of the baby’s survival. But she and her husband weren’t worried about the rules—American-born, they didn’t pay attention to the old superstitions.

The ideas of fate, tradition, and inheritance are integral to Cho’s work:

It is difficult to know where the story of psychosis begins. Was it the moment I met my son? Or was it decided in the before, something deeper rooted in my fate, generations ago?

She writes about the abuse she suffered as a child and at the hands of the first man she loved. She learned silence, endurance, and was taught early about sacrifice, borders, divisions between people—literally, in the case of her grandparents’ escape from their North Korean home—and that love can be weakness:

Koreans believe that happiness can only tempt the fates and that any happiness must be bought with sorrow. As for love, it is thought of as an unfortunate passion, irrational and destructive.

But Cho believes in the Western idea of a happy ending. She’s successful in her work, living in a cosmopolitan city, fulfilled in her marriage to James, and mother to a healthy baby. She seemingly has it all.

Cho had never heard of postpartum psychosis before she was diagnosed. A rare disorder occurring in only one or two deliveries out of 1,000, according to the Postpartum Support International website, it usually appears within the first two weeks after giving birth, though onset can be up to several months later. Symptoms include insomnia, paranoia, hyperactivity, hallucinations and delusional thinking.

In her case, Cho began to feel watched. Her in-laws had installed security cameras where Cho and her husband were staying, and even after they’d been disabled, she couldn’t shake the feeling that her every move was being recorded and judged. Time started to distort, faces twisted into monstrous shapes, and her baby’s eyes had demons in them. Almost three months after giving birth, she began her descent into hell.

And here is the part of the book where Cho’s mastery of narrative had me spellbound. She can’t escape her circumstances, and neither can the reader. Her experience is expressed in repetition and circular logic:

I was fracturing. I was splitting into versions.

I started to pull at my clothes and scream. I pulled my hair as hard as I could. Maybe if I hurt myself, …I could break James’ reality. I could show him that we were in purgatory. That we needed to exit. I felt the demons rush toward me, their faces pressing in gleefully, and their hands pressing on me as they twisted my ankle and pulled me down. …I felt the hands pull me down to hell.

I found myself holding my breath during much of this part. I had to put the book down to cry, to get up and walk away from it. This is how deep the wound goes. Eighteen years ago, when my son was almost five months old, I was in the emergency room. I’d been seen and dismissed three times before this, told I just needed to get some sleep; the doctors couldn’t find anything wrong with me. But I felt a hole inside of me that I couldn’t fill. I thought it was hunger, but eating didn’t help, and then I couldn’t eat. I couldn’t remember the last time I’d slept. When I looked at my son at the end of my arms, it was as if I saw him through the wrong end of a telescope—he was very far away. I’d begun crying ceaselessly, and there was a voice in my ear saying, they’d be better off without you.

It took time, but I got well. I recently spoke to the doctor who helped me and mentioned this book, and she acknowledged that these disorders still aren’t talked about enough. A large percentage of women suffer some depression or anxiety after birth, but most aren’t prepared to look for symptoms. As Cho puts it, she was so focused on the changes pregnancy brought to her body, she didn’t think about what might happen to her mind. I happened to see a post on Twitter the other day in which a woman wrote, I’m eight months pregnant and I’m afraid to give birth. Tell me it’s going to be okay. I need to know it’s going to be okay. The responses were all positive, and I understand why: who wants to be the messenger?

There’s a fine line to walk between giving information to and instilling alarm in expectant parents. But one of the reasons I knew something was wrong and pursued a diagnosis is that a friend of mine had gone through an experience very like Cho’s and had talked openly about it. This is the real value of Inferno, it seems to me. I admire that Cho is able to say the unsayable. As painful as it is to read, it communicates the truth of an unlikely journey in which she confronts her anguish and begins to find the way back. This is a story of heartbreak, but it’s also one of courage. In order to be well enough to leave the hospital, she has to construct an autobiography for the doctors: “How did I get here?” she writes. “How would I begin? …Perhaps I would begin with love.”