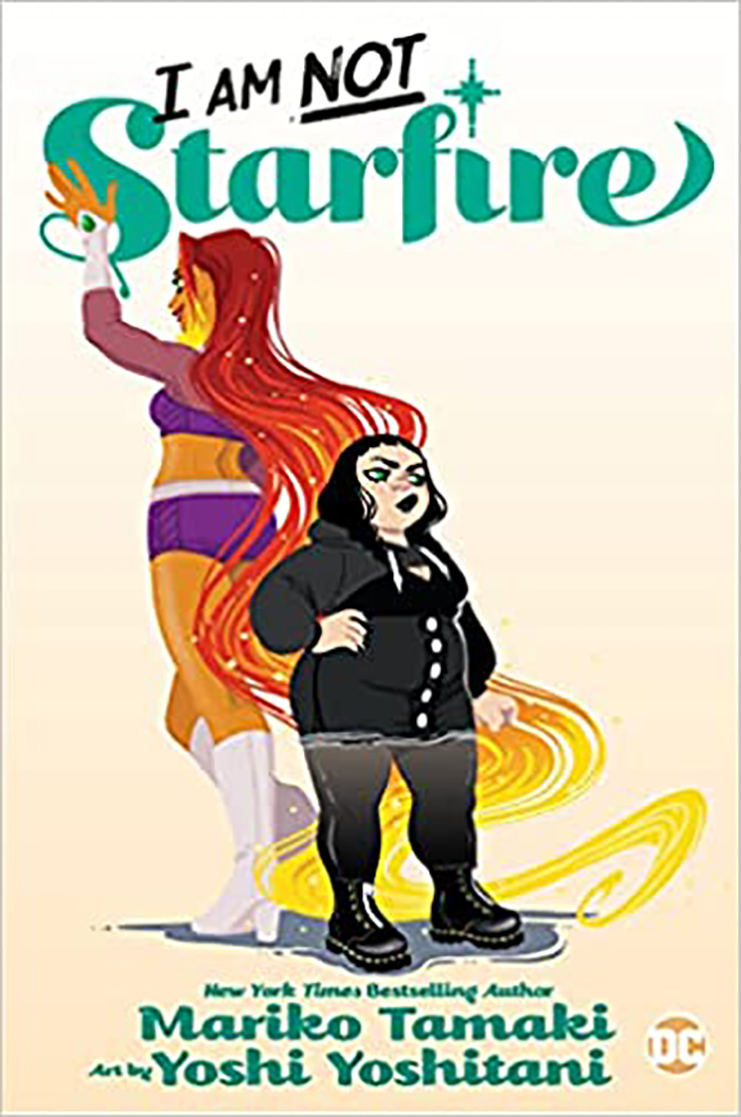 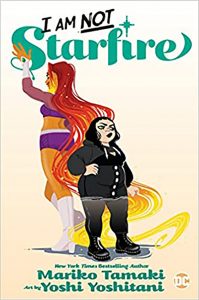 Many authors have been quick to jump on the coming-of-age train and create their own stories that are meant to connect with the youth of tomorrow. Coming-of-age narratives focus on the growth of the protagonist during a time of change in their childhood/teenage years. There tends to be a great emphasis on internal dialogue over action. Movies like Ladybird and The Edge of Seventeen are excellent examples of a flawed protagonist who grows and improves over the course of the story, but in the end isn’t perfect, a beautiful representation of the real world. That is what I Am Not Starfire, by Mariko Tamaki, aimed to do but came up short.

Built on the beloved world of DC comics Teen Titans, Mandy is a high school girl, but also the daughter of the popular superhero, Starfire. Starfire does her best to be a parent but struggles with what humans are expected to do since she’s an alien princess. Mandy does everything she can to avoid her mother’s spotlight and shadow. She’s born without powers and rebels against the system as much as possible. After walking out of her S.A.T. and deciding not to go to college, all hell breaks loose as her mother’s past comes back to haunt them. Mandy must learn about herself and her mother to truly live a happy life and accept herself and her family.

The art in this novel, drawn by Yoshi Yoshitani, is beautiful and unique. The color-blocking and aesthetic on each page work together to portray a certain emotion or create tension for the coming pages. This graphic novel can truly be commended for its art and use of the pages.

The beauty of some of the most popular coming-of-age novels is the development of the main character and their relationship with those around them. Ladybird has a similar story to I am Not Starfire where the protagonist has her main conflict with her mother around the idea of college. What that movie does well is using dialogue to move and process conflict between the two until it is resolved enough for them to move on.

This is something that was lacking in I am Not Starfire. There was a clear aim for the plot, but the execution was lacking. One of the main downfalls was the pacing of the story. Half the book was spent establishing Mandy’s stance on her mother and school and her friend, but it was unclear where it was going.

When the antagonist is introduced, it is really sudden and is resolved in the latter quarter of the novel. There was little to no development of the conflict. On top of that, this was meant to drive Starfire and Mandy to a place where they understand each other, but that happened in a matter of two or three pages. After what seemed like years of Mandy hating her mother, it was all fixed in a matter of hours. There needed to be more time to focus on Mandy and Starfire’s relationship instead of culminating in an alien battle. Mandy’s romantic relationship development also fell short due to this pacing.

It’s easy to overlook the pacing because of the graphic and artistic beauty of this graphic novel. On the other hand, something I couldn’t overlook was Mandy and the portrayal of Starfire as a mother. As someone who grew up watching the original Teen Titans cartoons and dabbling in the original comics, I had a clear foundation for Starfire’s character prior to reading the novel.

The portrayal of Starfire as a hopeful, kind and understanding alien was flipped on its head in this graphic novel. Her character is completely void of personality, and her relationship with Mandy doesn’t seem as central as it should be when that dynamic is the main conflict in the piece. They barely highlighted Starfire’s pride her home planet and made her a self-absorbed superhero.

Putting that aside, it was Mandy who caused the most controversy when this book was released. Many DC fans believed that the illustration for the character was a self-insert for the author. There is a clear likeness to Mariko Tamaki and less so to Starfire. Mandy as a character had little to no redeemable qualities. Her incessant judgmental attitude drives everyone away from her, including the reader. Her relationship with her mother is the ultimate multi-generational immigrant family dynamic, but it lacked compassion and love.

After Mandy reveals to her mother that she is hesitant about college, Starfire says that at her age she was training for life-or-death situations. This vulnerable moment is dashed by Mandy acting as if going to college is worse than what her mother went through. There is no attempt on Mandy’s part to understand her mother’s past or the things she goes through as a single mother. She chooses to “slut-shame” her mother for the way she dresses and the men she dates.

The immigrant parent and the second-generation child relationship is a difficult thing to navigate. As a child born from immigrant parents myself, I constantly clash with my parents because of our differing lifestyles and upbringings. At the end of the day, I understand the struggle they went through to come to America and build the life I have now, and I do my best to learn from them. This is something that Mandy has no capacity for. It seems like she forgets that her mother is from an alien planet and is trying to figure out Earthly customs to be supportive of her. Everyone forgives Mandy and forgets her mistreatment of those around her because she starts to “accept” who she is.

Teenagers are hormonal and angry all the time, but that doesn’t stop them from self-reflection. Mandy gives her mother no sympathy and no effort to build a good relationship. It felt like Tamaki was trying too hard to create the “not your average teenage girl” character and it didn’t work. Rather than having an imperfect character who is semi-likable and clearly confused, reading to grow into a better person, Mandy was just a bad character.

With a longer graphic novel and maybe some tweaks to the plot, Mandy and Starfire’s relationship could be portrayed better and Mandy could be redeemable. There needed to be more emphasis on their dynamics together so that they could work out their differences and have a satisfying resolution that mirrors the messiness and imperfection of the real world.