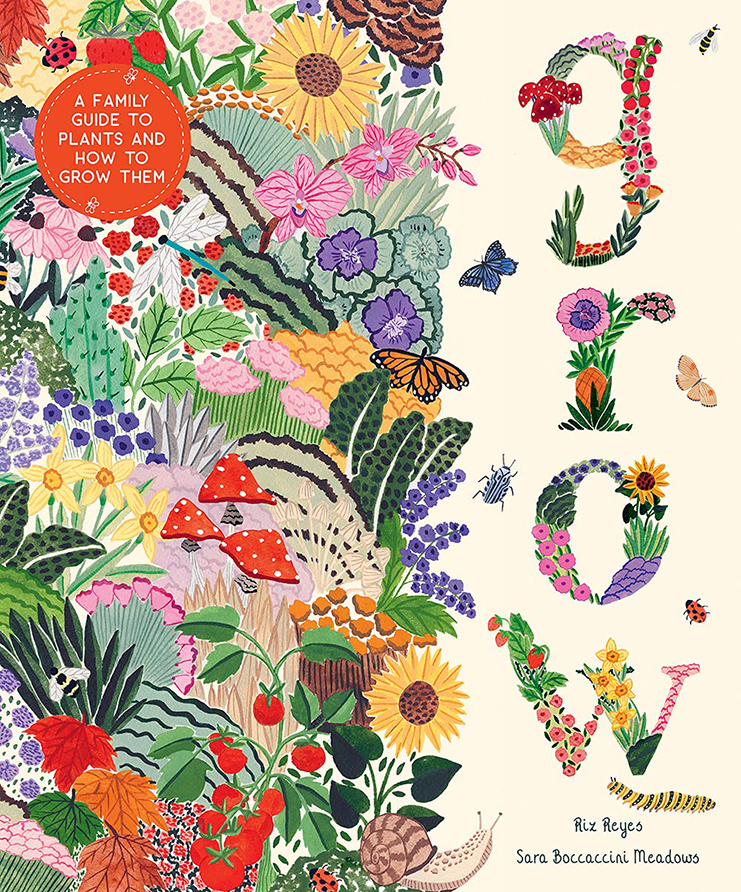 Children of the 21st century are raised in a computer savvy and digital world. As early as toddlers, through cartoons and videos games, they play the 20th century version of Cowboys and Indians, Cops and Robbers, Lex Luthor and Superman.  They can become superheroes in the alternate universe. Then along comes Pacific Northwest horticulturist Riz Reyes who causes children and their families to pause, to slow down.  In Grow: A Family Guide to Plants and How to Grow Them Reyes welcomes them to return to the kindergarten—literally, the children’s garden in the German language. He returns them to Mother Earth. He reintroduces them to Mother Nature.

Grow is a large tactile book bursting with joyful color, flowers and plants, easily cuddled by a child. Beautifully illustrated by Sara Boccaccini Meadows, Reyes walks the young and young-at-heart through a terra firma of what he calls superhero plants or flowers. He grew up in the Philippines playing in the fruit plantation managed by his father before moving to the Pacific Northwest at 7 years old. In his new home, he was introduced to the cooler region’s flora, admiring their similarities and differences with tropical ones. His youthful enthusiasm of discovering and learning about new plants and flowers is infectious. In the introduction he states:

We often think of superheroes as humans with extraordinary abilities and powers, but couldn’t we say the same about plants or flowers? We often overlook just how remarkable and resilient they can be: doing things we never could and saving our lives by simply existing on this earth.

Growing up, I began to see the plants as my heroes fighting through the challenges of life each and every day, showing their clever ways of growing, adapting, and teaching valuable life lessons each and every season.  It’s almost magical how they grow and flourish around us, providing food, shelter, and medicine.

Through fifteen plants or flowers from around the world, Reyes demonstrates how plant heroes sustained communities and shaped cultures, and continue to do so.  They range from the mint-hero for aroma and remedy, to the daffodil known for renewal and regeneration, to the bamboo famous for practicality and provision, and to the tomato, hero of productivity and pollination.

Plants or flowers awaken and heighten the senses of touch, vision, taste, smell and the sounds of silence. The stories of each plant or flower covers a chapter and includes a brief history of its origin and how it traveled from one region to another; for example via the Silk Road Trade Route across Far East Asia, the Middle East, Northern Africa and Europe for over 14 centuries. Hence, Reyes subtly teaches lessons of reciprocity and mutual survival. He also touches on biodiversity and social diversity. Each plant or flower is depicted as part of a family with interesting relatives. For example, siblings and cousins of the daffodil include amaryllis, garlic, and onion. The tomato’s kin include potato, pepper, and the deadly nightshade. Bamboo relatives include wheat, sugarcane and rice.

The stories can be read in any order with the reader pausing to absorb the narrative complemented by detailed, attractive illustrations. There are tidbits of interest such as the lettuce, hero of variety and versatility, was the first vegetable to be grown in outer space so astronauts could enjoy a fresh food rich in mineral and vitamins.  Rice, a grass seed, feeds more of the world’s population than any other plant. Aloe Vera, a succulent, is hero of resourcefulness and resilience. Succulents are found in every continent except Antarctica.

Reyes stirs youngsters to learn and appreciate flora. He arouses further exploration with a final page that presents a glossary and the plant classification system. He empowers young people to be fellow superheroes by including a section in each chapter with step-by-step instructions to grow and care for their own plants and flora, to dig into Mother Earth, listen to Mother Nature, and embrace the natural world, dancing in living color.